All the ways Abbott is letting us down

Crikey readers discuss Abbott's inadequacies and other issues of the day.

John Richardson writes: Re. “Intelligence committee hamstrings citizenship-stripping bill” (yesterday). Notwithstanding all the tiresome huffing and puffing by the aptly labelled Joint Committee on Intelligence and Security on the detail of the Abbott government’s most serious attack on the human and legal rights of Australian citizens and its determination to destroy the independent role of our nation’s judiciary, the simple fact remains that both major political parties have shown themselves willing to conspire in the birth of our new police state. All the lipstick in the world won’t cover the lips of that sick pig.

Don’t let the door hit you on your way out

Roger Richards writes: Re. “Two years in, it’s past time for Abbott to go” (yesterday). Naomi Klein says it all clearly about Tony Abbott in her talk at the Festival of Dangerous Ideas. Thanks again for a great read.

John Kotsopoulos writes: Abbott’s inability to negotiate was never better illustrated  than in his performance over the China free trade agreement.  In the same media conference where he makes his call for bipartisanship the attack dog in him escapes and virtually in the next breath he is accusing Labor of invoking the Yellow Peril and having racist motives.  Someone should remind this deplorable man that the FTA negotiations were started by Labor and were in an advanced stage when his administration came into power.

The Conversation: Tony Abbott is the symptom, not the sickness 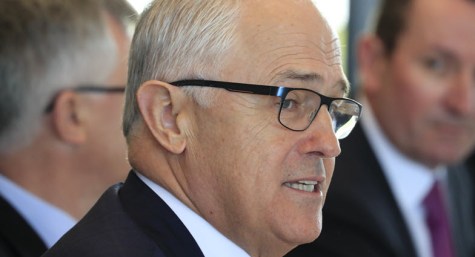 Turnbull’s position as shaky as ever

Abbotts reptilian hovering over the two trade ministers at the signing ceremony was truly unnerving..uuhh

Roger, thanks for that link. A truly inspiring talk.