As baby boomers get older, they tend to keep their political beliefs. And that is bad news for conservatives. 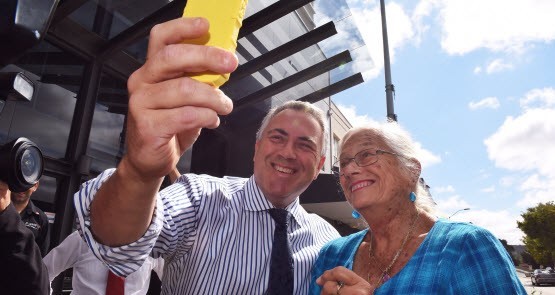 Fresh from cementing his reputation as a rising figure in the ALP through his election to the party’s national presidency, opposition environment spokesman Mark Butler has further enhanced his credentials as a policy heavyweight with the publication of a new book on the myriad challenges posed by Australia’s greying population.

Not the least of the concerns canvassed by Butler in Advanced Australia: The Politics of Ageing, published last week by the Melbourne University Press, is “The Electoral Politics of Ageing” — tactfully relegated to the back end of the chapter ordering though it may be.

In turning his mind to a subject close to any politician’s heart, Butler considers the biggest imponderable about structural voting patterns in the years ahead, namely the passing of the generation born during and before World War II.

At the heart of the matter are two alternative viewpoints on electoral behaviour, of which one posits that conservatism is a natural function of advancing years (the “life cycle” theory), while the other proposes that political attitudes are formed at a young age and largely maintained through life (the “cohort” theory).

The first of these notions underscores what Butler dismissively describes as “gerontocracy theory”, which anticipates a political system increasingly geared towards to the concerns of the elderly due to a decline in participation among the young.

This seems particularly relevant to Europe, whose democracies are grappling with declining voter turnout, and to a lesser extent the United States, notwithstanding that age seems to play a lesser role there than race and gender.

Despite compulsory voting, its effects can be discerned in Australia from the fact that more than 20% of those aged from 18 to 25 were not on the electoral roll as of 2013, compared with less than 8% of the total adult population. This bespeaks a growing sense of alienation that was highlighted by a Lowy Institute survey last year, which found only 42% of respondents under 30 were willing to allow that democracy was, in all circumstances, “preferable to any other kind of government”.

However, the alternative viewpoint suggests this picture is complicated by the generation gap between the baby boomers and their parents — who, having been at the heart of so many political and cultural phenomena from the 1960s onwards, have one last hurrah in store.

If the boomers carry their characteristically more liberal mindset into old age, the Australian electorate could be set to undergo a historic realignment to the left — particularly if the newly emerging generation at the other end of the scale maintains its enthusiasm for the Greens.

This development has been foreseen by Australian electoral observers for some time, among them erstwhile Crikey blogger Possum Comitatus (a.k.a. Scott Steel), who wrote of “the Coalition’s demographic train wreck” when the Rudd government was dominating the opinion polls in 2009.

Survey data supports the underlying contention that a durable distinction exists between the voting behaviour of boomers and the war generation, which has failed to narrow over time.

Using results from the regular post-election surveys conducted by the Australian National University, the charts below show how party support has differed from the overall totals for the war generation (born up to 1945), the baby boomers (up to 1964), Generation X (up to 1980) and Generation Y (henceforth). 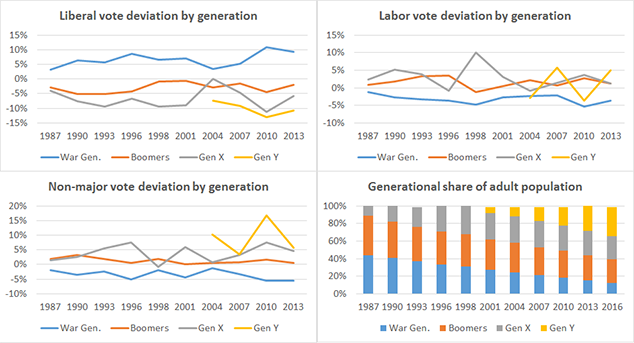 Crucially, the patterns for the baby boomers are broadly stable throughout, contrary to “life cycle” theory and its expectation of increasing Coalition support over time.

The chart at bottom right illustrates the changing shares of each generation as a proportion of the total voting population — including a projection to 2016, when the war generation will carry barely more than a third as much weight as Generation Y.

The implication is that demographic attrition will cost the Coalition about 1% of the vote over each of the next few three-year electoral cycles, until the war generation fades from the picture altogether.

Of course, the electoral failures of the Rudd-Gillard government offer a potent warning against taking too deterministic a view of such trends.

The Coalition is not a passive actor in the process, and will surely adapt to the more challenging environment as its implications become more apparent.

An obvious place to start would be to dispense with a Prime Minister whose disapproval ratings among the under-40s have, in the last three Ipsos polls for Fairfax, ranged between 60% and 66%.

For the time being though, the electoral gods may have done Tony Abbott a good turn in choosing, for the scene of his looming big test, the seat of Canning — which, thanks to the retirement haven of Mandurah, has Western Australia’s highest concentration of residents over 65.

Ageing blueprint back on track — panel re-formed outside govt

Surely you mean the electoral gods may have done Bill Shorten a favour with the over sixty fives likely to retain the status quo and elect Hastie..The deceased incumbent was no fan of Abbotts and maybe the electors of Canning will take the opportunity to give Don Randall a real send off by voting Tony down.

I suspect that both the life-cycle and the cohort theory carry some weight. I doubt very much that boomers aren’t gradually slipping into a more conservative mindset. They seemed to be quick to shed any anarchist and free love ideologies, although perhaps they never really existed in any real majority of that age group.

The charts seem to suggest, to my reading, that the boomers were much closer to a 50/50 split historically, meaning that they won’t count for much either way in polling.

Certainly the skew of the older folk were, in my mind, a reflection of a nostalgia for an uncomplicated world without too many foreigners, or concerns about what the rest of the world does. Very much coalition voters.

Perhaps the ‘new’ will be a two party system, with Labor on the right and the greens as the party of the left, with the coalition a rump of a party, like its adherents, waiting for the final curtain.

And in that, perhaps there is hope for Australia and the world.

Sitting in a medical centre today listening to elderly patients discussing the medications and the overseas holidays they’ve been on / are about to have / plan for the future, I’m not surprised they won’t be supporting The Coalition
What their excesses are doing to Australia’s future, however, shouldn’t cause any thinking Australian much joy unless he/she also has a snout in the numerous available troughs.

We are witnessing the inevitable demise of the LNP with it’s current leader the most adept of undertakers.

Wot Jaybouy said – “..the electoral gods may have done Tony Abbott a good turn ” which, thereby, is good news for Shorterm.
Pity about two once relevant Parties.
And… that nation thingy.
Vote Green or Independent, D/D Now!