While hardworking journalists sweated it out under threat of a defamation case in Thailand, Reuters head honchos sat in their boardroom, writes journalist David Harrison. 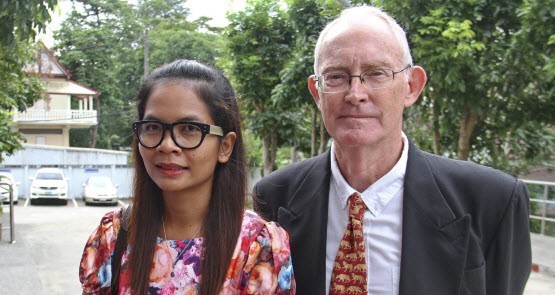 A few of us have been sitting around in Phuket doing a bit of celebrating after a Thai court threw out defamation and other charges charges based on a paragraph republished from one of your stories.

It was a pretty heady celebration, as you can imagine. Most of us are Aussies, and we hit the Singha hard on Tuesday, September 1, after the verdict.

The court threw out the case, brought by the Royal Thai Navy against a little fish, the online news site Phuketwan, run by our old mate Alan Morison and his feisty Thai colleague, Chutima Sidasathian. You were the big fish, the big corporate whale, apparently too big to hook.

The case was thrown out, Reuters, in case you hadn’t caught up with the news way up there in the board room. No “not guilty”, no “acquitted” — it was chucked into the bin. We had a fine old time with puns and smart headlines about torpedoing and sinking without a trace that afternoon, as you might imagine if ever you worked in a newsroom.

By Wednesday we started looking for reaction from you, originator of the paragraph that was found not to be defamatory. Maybe we looked for a hint of something slightly, vaguely, congratulatory directed to Alan and Chutima — the remarkable young lady who helped you gather the information that led to your winning the Pulitzer for work on the Rohingya refugees.

Perhaps we thought you might revise your patronising remark that Chutima didn’t give you much help towards the Pulitzer win, which someone in your vast bureaucracy must have known was, may I use an Australianism, a pile of reeking wombat dung tall as the average board member. She is an expert on these unfortunate people, an adviser to the Thai government, a doctoral student on their tragic plight. Christ, you were lucky to find her!

We guess you were running a trifle scared, with your substantial interests in Thailand, steering clear of any association with the little fish, Phuketwan, that might impinge on your corporate interests.

That, unfortunately, is how corporate media behave these days. Keep the image well glossed, the investments safe and the devil take the hindmost.

Your “little people”, the ones in the field — the ones you in the boardroom have only vaguely heard of, the “assets” who bring home your bacon at the cost sometimes of family, health and even their lives — mostly retain the old spirit, of sharing information, and danger, helping out their mates and broadly behaving like human beings.

Which is what working journos are, some extremely basically so. From the beautifully professional, plummy BBC to rough freelancers chancing their arms around the globe to bring you the plaudits, they are who you rely on for your raw material. They break out the beer to celebrate, you probably reach for whisky and cigars as the ratings and profits soar.

This writer recalls Reuters from years ago running a big-paper foreign news desk, as reliable and consistent but pretty dull. Agence France-Presse used to send excited copy, especially with disasters such as quakes, floods and volcanoes. You had to be very careful with their death and injury estimates. They often got there first, so they got a run. Halve the first figures was a good rule of thumb.

One could sense the soul, the sweat, the fear in some agency copy. Actual people were out there, ducking and dodging, so they could report in. You could hear the larrikin in some of them.

Clearly corporation building was on, even back then. But one senses the reluctance of some to curb — and a desire in others to encourage — the ebullient irrepressibility of buccaneers who thrive on going forth to bring back the facts.

Alan and Chutima will no doubt at some stage meet up with a Reuters correspondent or two in the course of their work. The one who wrote the offending paragraph was snatched home out of Thailand to ensure the Pulitzer would not be tainted by the defamation case. They will have a drink and swap stories.

But at this moment one can imagine a frisson in the Reuters board room as its occupants wait to see if the Royal Thai Navy decides to appeal against its case being dismissed. What if an appeal were successful? What if the navy turned its sights on Reuters? What if the Pulitzer lost a little of its gloss?

But that’s for shiny suits in boardrooms, probably lawyers and accountants who have never muddied their shoes in a jungle, to worry about. Down here, the news just keeps coming.

Perhaps Reuters has already scheduled a high-level meeting to formulate a plan to come up with a form of words in a conciliatory corporate gesture to re-make contact with Phuketwan. Or not. Forget it. It’s already too late.

The origins of news agencies in the 1800s must have a lot to do with the needs of wealthy capitalists to know what was happening around the globe so they could trade stocks listed in London. I guess the interests of capital have always been paramount in western media.

I guess the risk is when media conglomerates get so big they can’t afford to not sell the little guy out.

Crikey itself was started by a shareholder activist – few things do more to motivate subscription payments than invester self-interest.

Thank you, David Harrison. It’s good to see some attention paid to the people behind the agency products and the unacknowledged risks they assume in their unacknowledged work, especially where press freedoms are limited.

Anonymous Limited News, why not put less effort into referring to Capitalist Media in the 1800s and analyse current Capitalist Media entities such as Crikey et al?
When even Faux Left organisations such as the Crikey Commissariat engage in merely pretending to analyse important socio-political issues we can hardly criticise Reuters with a straight face can we.