Mike Baird’s hurt feelings. NSW Premier Mike Baird was yesterday questioned by Labor’s Penny Sharpe as to why the documentary on gay parenting Gayby Baby was not allowed to be played during school hours. After some debate over whether or not the film was actually banned, the topic turned to Baird’s own position on same-sex marriage. Baird backs a plebiscite on the issue, but as a devout Christian, he is personally opposed to same-sex marriage. Sharpee asked Baird how he could support a plebiscite given the debate that ensued after the film ban, and Baird insisted that people complaining about his opposition to marriage equality had been hurtful to him.

Sharpe: Premier, after the furore in the past few weeks you can understand the concerns of many people as to how this debate will play out.

Baird: I do, but I hope you also understand that some of the things that have been directed at me — because I have a different position on this — have been incredibly distressing and hurtful. I understand that people have different views to mine but that does not mean I value them any less.

Sharpe: I want to be clear about this. It is your position on marriage equality that it should only be available to a man and woman? Is that correct?

Baird: That is my position. Again, I know there is a difference of opinion out there. I think the onus is on this Parliament and, indeed, political leaders full stop, to try to encourage a debate that does not bring out the hate that is so prevalent. There is a lot of hurt in this debate and a lot of people are hurting on both sides.

Sharpe: I am sorry that your feelings are hurt.

When asked later about it, Nice Guy Premier Baird said that he would not say that “the hurt of one person is more than the hurt of another”.

Freedom Boy to the rescue! We’ve always known that the IPA freedoms harder than anyone else could freedom, but now they are in the running to prove that they really do freedom more than anyone else. The free-marketeers at the Institute of Public Affairs are in the running for a $100,000 grant because their marketing strategy in opposition to the carbon tax was just that good.

The IPA has been nominated as a finalist for the Templeton Freedom Award for its “20 Years” of work on the tax, the group;s nomination statement says: “The IPA was the loudest consistent voice against the carbon tax in a time when there were very few dissenting voices in Australia.” The Atlas Network website praises the IPA’s campaign, writing:

“As the only major organization in Australia to publicly and consistently oppose the tax, the IPA’s work against the carbon tax was instrumental in fostering sentiment against the tax, which, in addition to its economic drawbacks, wouldn’t have achieved any environmental goals.”

Freedom Boy Tim Wilson even gets a special mention for attending climate conferences all over the world (looks like he was a jet-setter before becoming Human Rights Commissioner):

“Wilson attended every international climate conference between 2009 and 2013, including conferences in Durban, Doha, Copenhagen, and Warsaw, and was able to effectively communicate to the Australian public the lack of consensus over pricing carbon that existed among experts.”

The IPA will find out the results on November 12.

Don’t be Hastie. Candidate for the seat of Canning Andrew Hastie told the media yesterday that his family should not be picked on, after Crikey raised questions about the religious beliefs of his father, Reverend Peter Hastie, the principal of Presbyterian Theological College in Melbourne. Peter Hastie is a Creationist who has been published on the website creation.com. At a press conference yesterday Hastie said his family should be off limits. Reporters also questioned Hastie about blog posts about homosexuality that bore his wife’s byline. Hastie says his wife did not write the posts, but just uploaded them as part of her job.

“But today, I have some questions to answer about my religion. I am an Anglican, and I make no apologies for that. However, questions have been raised to me, by the media, which focus on my wife and my father.

“And I think that’s totally unacceptable. I have no problem with people coming after me, but just make sure you come after me and not my family.”

Hastie refused to be drawn on whether he shared his father’s beliefs, including Creationism. He did say that he didn’t believe in marriage equality, but that there should be a “people’s vote” on the issue.

Rumblings at Customs. We’ve been hearing a lot about what’s going on at the Australian Border Force — weekly announceables, of course — including that the newly badged agency is spending up big on new uniforms. The merger between Customs and Immigration that has been a bumpy ride, and now we hear the unrest over the agency’s latest pay offer is heating up:

“That the conversion of Customs and Immigration to Border Force, as exact a copy as possible of the US Homeland Security, costs $10million as is publicly known.  What may be less known is how much the price for this was actually borne by employees in wages and conditions. Unless the union is successful, part of the shiny new Gestapo-esque outfitting and signage is to be paid for by significant pay cuts across the board, that will have wages falling markedly behind cost of living increases, plus an across-the-board increase in working hours of 8 minutes per officer per day.

But the change extends to conditions as well. Remote placements in Weipa, for example, or the Kimberly, will receive no extra time off to enable them tot travel back east to have any time with their families, and the conditions that ensured two free flights back to their families per year have been cancelled. Flexible hours for parents with young children will disappear;  mothers who formerly could choose to say begin work at 6.30 so as to leave early enough to collect children from school will now be obliged to work in more rigid 9-5 terms.”

It’s been reported that the change in work hours for Customs employees will actually be nine minutes each day for former Customs employees moving across to the new body, which the CPSU says will add up to an extra week a year. We asked the department whether these conditions would be cut as part of the deal and got this response:

“The proposed EA will continue to provide employees in defined remote locations access to district allowance, additional leave, and leave fares for themselves and their eligible dependents. Leave fares assistance will be provided on the basis of cheapest airfare of the day, or where travel is by other means, reimbursement of reasonable travel costs up to the value of the equivalent cheapest airfare of the day. The proposed EA will also maintain flexible working arrangements, including access to variable working arrangements, part-time work and home based or teleworking arrangements.  Job sharing also remains available where operational requirements support this type of working arrangement. The Department will continue to provide reimbursement of approved child care costs for school aged children where an employee has approved leave cancelled during the school holidays.”

Graham Lloyd. Earlier this year we reported that The Australian‘s environment editor, Graham Lloyd, one of the paper’s fiercest critics of renewable energy and the Bureau of Meteorology, ran the Lupunaluz Foundation in the Amazonian Rainforest. Today he has a long feature in the Oz about the project, writing:

“It was an easy decision six years ago to buy the first 140ha of Amazon forest to stop it being cut down. A tiny gesture spurred in part by bags of charcoal being sold along the roadside where big trees, hundreds of years old, had been turned into low-value fuel to pollute local kitchens for less than $1 a bag.”

The piece then goes on to describe why the Coalition’s Direct Action plan is such a good idea. 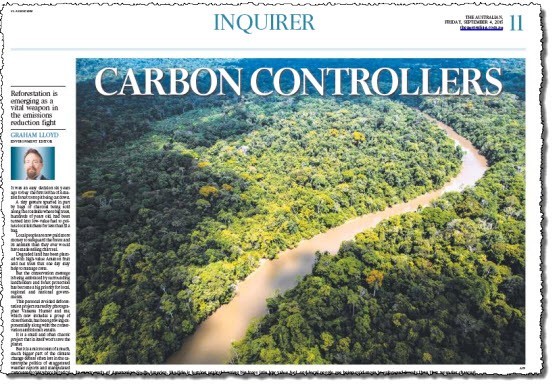 A sad day when “freedom” becomes synonymous with “unabashed lying”

Surely Hastie’s position on creationism is worth hearing? And not beyond politics.

The people of Canning need to know whether the person they are voting for is deluded bordering on the insane, for surely that is what a belief in creationism is in the 21st Century?

I’m surprised that the Templeton Foundation, which is infamous for the Templeton Prize – a £1,000,000 award to a scientist who says something nice about religion, also has a freedom award. Which as Chris has noted is a prize for lying.

I know some YECists who aren’t insane. Although whether a person who is seeking semi-power (actually deci-power) as a backbench MP should be anchored in reality enough not to believe that the Earth is less than 10,000 years old is another question.

“Vote for the Lucky Dip!” – to represent you?