Time for creativity as deflation and low interest rates stretch ahead

The challenges of low growth, low interest rates and, potentially, deflation, all illustrate the need for Australia to get creative with encouraging growth, Glenn Dyer and Bernard Keane write. 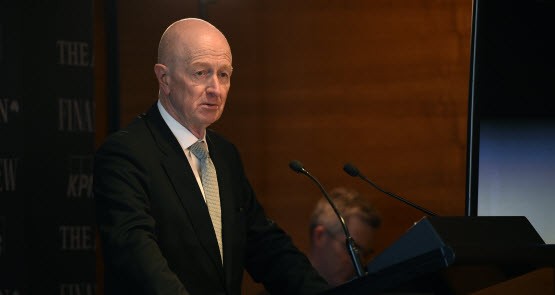 In a speech in June, Reserve Bank governor Glenn Stevens issued a challenge to policymakers (and the rest of us): find a new way of boosting the economy. The speech’s subtitle “Creating the Upside” neatly captured the speech’s substance and his challenge.

Stevens urged the government not to cut spending too quickly, and flagged that monetary policy had its limits in terms of its ability to stimulate the economy.

“That being so, we might give some thought to trying to create [his emphasis] some upside risks to the growth outlook through policy initiatives. The Reserve Bank will remain attuned to what it can do, consistent with the various elements of its mandate — including price stability, full employment and financial stability. We remain open to the possibility of further policy easing, if that is, on balance, beneficial for sustainable growth.”

Creativity sounds like an oxymoron from a conservative central banker, but he was serious and remains serious because, as he has pointed out in subsequent comments and speeches, we may have to get used to the idea that the economy will now grow more slowly for longer than we have previously thought; perhaps at 2% to 2.5% with the odd spurt higher. This means higher unemployment, lower interest rates, weak income growth (even negative, as we are seeing now because of the collapse in our terms of trade).

It is a view now strongly supported by the International Monetary Fund ahead of tonight’s meeting of G20 finance ministers and central bank heads in Turkey: yesterday the IMF told central banks not to raise rates in order to allow growth to recover. It especially told the US Federal Reserve not to raise rates until at least next June; the Bank of England was another target. The IMF believes the expected boost from the fall in oil prices in the past year has failed to materialise, and with low inflation in all advanced economies, “monetary policy must stay accommodative to prevent real interest rates from rising prematurely”.

Like Wayne Swan and Labor before him, Treasurer Joe Hockey has been whacked by economic reality: sluggish global growth, near-zero interest rates and, now, the global over-production of commodities and manufactured goods of every description that means a bout of global deflation potentially in the offing. Dominic Rossi, global chief investment officer, equities, at Fidelity Worldwide Investment, yesterday wrote in the Financial Times:

“The world economy is bearing the brunt of a third deflationary wave in less than a decade. The first was the US-led housing and financial crisis of 2008-9, the second wave was the eurozone crisis of 2011-12, and now a third, an emerging markets crisis. This emerging markets crisis bears many of the hallmarks of previous episodes. All emerging market crises start in the foreign exchange markets before making their way through others: commodities, debt, equity and finally the real economy. This one is no different….this third deflationary wave will mean that world GDP will continue to operate at a level below potential output. Downward pressure on prices will persist and a supply-side contraction in developing nations will be required before prices stabilise. A further fall in potential global output is now unavoidable. The adjustments to GDP forecasts are still ahead of us.”

This outlook is a real challenge for the present federal government, which has shown a distinct lack of heart in engaging the economic outlook and trying to explain it to Australians and to explain the dilemmas it creates (and so has the Labor opposition and Bill Shorten). Wayne Swan had the vice-like grip of the high Australian dollar on the economy to contend with, but it was at least a potent symbol to Australians of the challenges facing the economy. Hockey a more nebulous economic challenge to explain to voters — but at least he has a lower currency. At his GDP media conference on Wednesday, Hockey was lamenting iron ore no longer being above US$100 — but failed to mention that he now has an Aussie dollar poised at 70 cents, and looking to go lower, which helps, not strangles the economy.

They won’t dare admit it, but Joe Hockey and Tony Abbott are being held hostage by economic events and factors beyond their control, just like their predecessors Swan and Gillard. The one-off, inadvertent surge in government spending in the June quarter showed what could be done by governments wanting to help, not hinder an economy stuck in a low gear in a slow economic environment. Perhaps it’s time they pursued some upside risks of their own.

Maybe if the surplus fetishism could be replaced by an understanding that the government /isn’t/ a household and isn’t required to get its money from someone else then we could get over this terror of actually having the government put money into the economy . . .

Personally I’d be okay with inflation at the /top/ of the 2-3% band if it meant fewer unemployed and real wages growth – if the only way to achieve that is for the government to run a deficit then so be it.

The fall in oil prices hasn’t delivered the expected boost to growth, true, why not? I’d argue its because oil exploration & production costs are rising and soaking up ever larger proportion of investment, starving the rest of the economy.