‘The school did the wrong thing’: harrowing evidence from child abuse royal commission

Geelong Grammar has been dealing with allegations of child abuse in a proactive way, asking former students to address the royal commission. 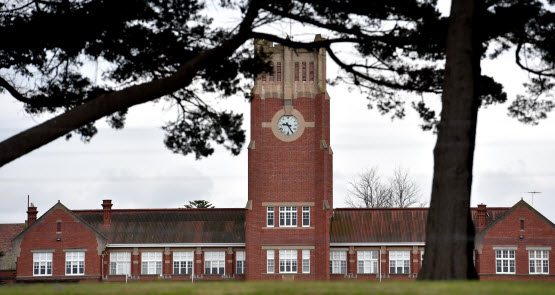 For some former Geelong Grammar students, the Royal Commission into Institutional Responses to Child Sexual Abuse is just a chance to be believed.

BKO grew up in the Latrobe Valley and was sent to Geelong Grammar as a 10-year-old in 1969 after his parents divorced. He lived at the Glamorgan campus in Toorak. In testimony he gave to the royal commission on Wednesday, BKO gave evidence of a teacher inviting him into his sleeping bag during a camping trip. He declined, now saying he “dodged a bullet” on that occasion, and didn’t report it. The second incident, however, he did report.

A “hip” chaplain, John Davison, would play music from Jesus Christ Superstar and Joseph and His Amazing Technicolour Coat for students. He developed an interest in hypnosis, and after attempting to hypnotise a group of boys, including BKO, one day after school, he abused them.

BKO told Crikey he had reported the incident a year after it happened to his maths teacher, Jonathan Harvey, who was later convicted of child abuse himself.

“That in itself is kind of indicative of how prevalent it was. I choose to go to somebody and they turn out to be a paedophile,” he said.

BKO says he was taken into a room on his own and told to write down what happened.

“And I was told: ‘We’ll try to work out who is telling the truth. At the moment it is not looking good for you’.”

BKO went home for the holidays, and he came back and Davison was gone. The chaplain had confessed and had been moved on, but nothing was said to BKO about it.

“Nobody said anything to me. Nobody said they believed me, nobody said sorry or asked how I was.”

Harvey was cold to BKO after the incident, and he says other teachers treated him differently, too. When rumour later spread around the school during a camp at Timbertop that BKO might take the story to Melbourne tabloid The Truth, BKO was hauled before the headmaster at the Timbertop campus, Bob Bickerdike, and was “ripped through”.

“I realised the masters at school knew what happened the year before, and they were shit scared. This master was really brutal. He said ‘If you write a letter, you are expelled and you are gone.’

“That’s the way the school thought: we have to shut this down as fast as we can. We don’t believe the children. I look back now, and when I complained about the minister, I was naively optimistic that the truth would win out.”

Geelong Grammar has come a long way in the intervening years, BKO says. He says the school is the first institution to be examined by the commission that has tried to “get ahead of the game” by sending out letters to all former pupils. When the letter arrived for BKO, he says he sat on it for six weeks before deciding whether to give evidence.

“I haven’t felt like I needed anything particular from the school. I felt for the other boys. The three teachers who were part of my story, when I googled them I found two of them had been to jail but one of them hadn’t … The one who didn’t was a bit more significant. He was a school minister.”

The third man, the minister, died before he was ever convicted. BKO says he felt like he avoided some of the worst abuse at the time, but he says he still felt intimidated by the school.

“If this was the same for other boys … I thought it might help them to know that other people had experienced this. I assumed the school had fixed it up and got the processes right but maybe they hadn’t. They needed to hear my story.”

BKO told the commission on Wednesday he had never commenced civil proceedings against the school, reported the incidents to the police, or seen a counsellor about the abuse. He told Crikey that he didn’t feel vengeful towards the school, just frustrated that some of the men involved went on to continue to abuse other children for years afterwards.

“I’m upset they got to continue on. If I’d been listened to, they wouldn’t have been able to offend again. That’s on the school’s head, because they didn’t do anything about it. So much harm could have been prevented if they just bloody listened and did something about it,” he said.

BKO says the staff at the royal commission have been “absolutely brilliant” in their support for people giving evidence, and after speaking this week, he says he hopes his evidence can help others who suffered more than he did to come forward.

“It gave me some validation. The way they dealt with it had more of an impact on me than anything else. It was unfair, and I was poorly treated. The way the school did or didn’t deal with it really upset me. I was really pleased I came forward.”

He says he finally feels validation about reporting the abuse to the school.

“A lot of people who were a lot more damaged than I was said they feel like they can testimony now,” he said. “As a child I did the right thing, the moral thing. And the school did the wrong thing.”

I feel great sympathy for BKO but think his statement: “We don’t believe the children” is incorrect. Reading all the evidence suggests to me that many teachers at the school knew perfectly well that the kids were telling the truth. What the teachers and the school were scared of was that the kids’ stories would become public knowledge.

And damage the school’s reputation (and their own).

the staff at the royal commission have been “absolutely brilliant” in their support for people giving evidence …
I hope all the people who are grateful for this Royal Commission remember Julia Gillard’s role in establishing the Commission and how the two mates Abbott and Hockey tried their damnedest to prevent it from getting off the ground.
This Royal Commission has been a lasting benefit to the nation.