Rundle: Abbott’s Nazi comparison a mess of his own making

Abbott may be the first politician who used the Holocaust as an example of something that was not actually that bad. 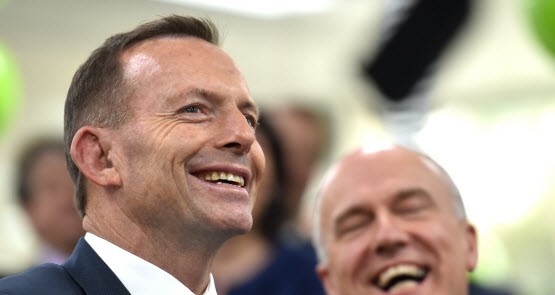 You have to hand it to Tony Abbott — he is well on his way to wrecking the relationship between the right and Jewish and Zionist peak community groups. That’s an anti-achievement I thought was beyond anyone, but the man is making it happen. Abbott’s remarks about Islamic State, which he later claimed were ‘words put in my mouth by journalists’:

“The Nazis did terrible evil but they had a sufficient sense of shame to try to hide it. These people boast about their evil, this is the extraordinary thing. They act in the way that mediaeval barbarians acted, only they broadcast it to the world with an effrontery which is hard to credit.”

As Robert Goot of the Executive Council for Australian Jewry noted:

“The crimes of Islamic State are indeed horrific, but cannot be compared to the systematic round-up of millions of people and their dispatch to purpose-built death camps for mass murder.

“There is a fundamental difference between organised acts of terrorism and a genocide systematically implemented by a state as essential policy.”

As usual with Abbott, there’s no need to condemn the remarks. They’re ludicrous. Let’s proceed straight to the autopsy. What can have prompted these stupid, delusional and deeply counter-productive remarks?

Overexcitement: Abbott was talking to Alan Jones, one of his last supporters (and only on certain matters), and that always becomes a bit of a hot tub time machine. Obviously Abbott is trying to big up the IS threat, but keeping the Zionists on side is a big part of that, and only a fool would diminish the Holocaust. Abbott is just sucking up, playing up to the imagined audience of Jones.

The cartoon view of terror: How is it possible to compare a group that methodically killed more than 6 million people, thousands all day, every day, with an eye to the annihilation of whole peoples, with a brutal group that uses targeted and highly visible terror to limit resistance within captured territory? Because “terror”, rather than being assessed as a strategy that is either ruthless, immoral or genuinely evil, has, since 9/11, been rendered as a “black box” without gradations or degrees. To compare IS’ use of limited atrocious terror for obvious political ends with the vast and radical evil of Nazism is immoral in itself. It is an obvious lack of understanding of the meaning of the Holocaust at the most basic level.

Prioritising spectacle over event: This has been the way with IS all along. While the Assad government has killed perhaps 200,000 civilians — burning them alive from above, not below, with bombing runs — IS may have killed a tenth of that number. Their more spectacular killings, on video, would amount to no more than a couple of thousand. Abbott simply allows the spectacle of evil to steer his moral judgement of the intensity of evil. That’s not a moral judgement. It’s an aesthetic one, masquerading as a moral judgement.

Shamelessness as the ultimate evil: This one is Abbott’s, all his own. Apparently killing someone is one thing, but the real sin is to make it visible and celebrate it. Thus by this revolting logic, burning four men alive — as an atrocious and terrifying act — is worse than gassing half a million adults and children at Belzec death camp. You haven’t heard of Belzec? Of course not, because, unlike Auschwitz, almost no one survived it. By almost, I mean fewer than 10 people out of half a million. Most were gassed as soon as they arrived. And, like most camps, the Nazis tried to conceal its existence and true aim. What can Abbott’s phrase “at least” mean other than that the operation of Belzec was in some ways less worse, less “mediaeval” than IS’ targeted, aestheticised killings? Abbott’s remark about “a sufficient sense of shame” is disgusting. Simply disgusting. His obsession with how someone presents the act, rather than the act itself, echoes the narcissistic self-concern the Nazis had (the opposite of shame). Many people know Himmler’s notorious speech to SS officers — “Despite seeing 1000 corpses, we have retained our decency” — but few know how it ends. Here it is:

“Altogether, however, we can say, that we have fulfilled this most difficult duty for the love of our people. And our spirit, our soul, our character has not suffered injury from it.”

That is the same concern Abbott puts front and centre. Not what you did, but whether someone saw you doing it, and how that affected your selfhood as measured by the regard of others. Shiny as a pair of jackboots.

The Crusader View: The Holocaust has already been a dicey thing for the Western Civ rah-rah crowd. Nothing any non-European civilisation has done approaches the pure and radical evil of the Holocaust. People try and wave Mao’s Great Leap Forward, etc, around, but deep down everyone knows that this atrocious, wanton, ruthless experiment did not have the radical evil ends that the Holocaust had. And nothing the Muslim world has done even comes close.

But this is a real problem, because the right would like to construct Islam as a uniquely malign religion for any numbers of reasons. For a conservative Catholic like Abbott, Islam represents a challenge from the other end of the Abrahamic continuum — it seeks to situate Jesus as a prophet on the way to Muhammad, and not a god, but a man (presumably a somewhat deranged one). Islamic State presents itself as Islam in its purest and only true form — Abbott is happy to construct them as a uniquely evil force. There is a profound commonality of interests between IS and Abbott. IS wants to be seen as “evil”, a fearsome cleansing death cult, contrary to the spurious secular-internationalism of the West. They do so on the basis of some hundreds of killings, filmed like an early ’80s Ultravox video clip. Abbott is happy to give assistance to turn this stomach-churning political kitsch into a real and compelling thing. Meanwhile, Assad wants to kill tens of thousands of people with as little publicity as possible. Abbott is happy to help with that, too, because Assad is now our ally — with jets from Russia flying in northern Syria, we cannot but be co-ordinating with them, and thus with Syria, if we are flying missions there, too. We are actively working with Assad’s “boring”, unrecorded regime, and much of the fuss about IS is to distract from this.

Many people have been rightly criticised for comparing any number of incidents of political violence to the Holocaust. Tony Abbott is one of the first people, as far as I can see, to actually say there was something worse than it, and to base that judgement on whether or not a press release and video package was distributed to outlets. There are all sorts of legitimate questions as to whether the Holocaust gets undue focus compared to other genocides, especially colonial ones — but no one to my knowledge has hinged it on the degree of “shame” felt by the perpetrators. That’s all Abbott’s own.

I wonder if the Jewish and Zionist peak bodies will have the courage to raise hell about this until Abbott apologises? And I wonder how much shame the men and women of the parliamentary Liberal Party feel at being represented by this man? And whether they’ll do anything about it?

An ‘apocalyptic death cult’? What IS really wants

Fifty five million dollars to the Khmer Rouge tainted Hun Sen in Cambodia in a vain attempt to offload kidnapped refugees some of whom have tried to escape from the “death cult”seems a little incongruous with his rhetoric..

It’s breathtaking. It used to be an Abbott fuckup a week, now it’s daily! The 24 hour Abbott Fuckup Cycle.

“Crusader Abbott”? Where’s Rags?
After what he’s gone on record saying about another issue “close to his political heart” – Aborigines.
It was probably just another case of us misinterpreting what he said, doing ISIS work, feeding fear and terror. I’m surprised he didn’t reach for the “Pol Pot kettle black” analogy.
Maybe we just need an interpreter for every time he opens his mouth to swap feet?

Seemed to miss ABC TV news last night – as it did the Curry or Maul?
“Heaven forbid embarrassing this Pissant Moralist” – even with his own words?

Your use of the far right Zionist stooge Robert Goot’s quote clearly illustrates the fact that you need to do some more research.