Quaedvlieg's suggestion for Dutton. And other media tidbits of the day.

Quaedvlieg’s hand-holding. Immigration Minister Peter Dutton has, in recent days, been on a crusade against Fairfax and the ABC, who he accuses of being on a “jihad” to bring down the government.

He repeated his comments, first made on Monday, on Ray Hadley’s 2GB show: “All I can say is the reaction to the Australian Border Force operation in Melbourne was hysterical by some of these media outlets and it’s hard to seek an explanation for that,” he told Hadley yesterday. “They [the media] run things. They don’t check with my office beforehand.”

Many journalists responded by saying they never had their calls to Dutton and his office returned, particularly if they were viewed as “unfriendly media”. In Crikey‘s experience, he’s one of the hardest ministers to get a comment from, and that’s a widely shared view among the industry.

Dutton’s difficulty with the media was again on display yesterday, at a press conference on a cocaine bust, where he was asked if his department is considering an amnesty on cancelling the visas of foreign students who testify about underpayment and other exploitation (working more than 20 hours a week can get them deported, but regular rorting of this system by 7-Eleven was uncovered by Fairfax and the ABC in recent days). Dutton gave a non-answer:

“Well, look, I think any of those matters obviously need to be properly investigated and the appropriate response be provided at the time, but there’ll be a process for that to go through and we can make comment on that in due course.”

But just before he started answering the question, the head of Border Force (the new agency combining customs and immigration) Roman Quadedvlieg quickly and quietly mutters “considering it” to Dutton, barely moving his lips. The advice, which sounds like a suggested answer and a glimpse into the Department’s thinking on the issue, is clearly picked up on Dutton’s mic, as last night’s ABC 7.30 points out in this report (around the 6-minutes-30-seconds mark). If Dutton had taken Quaedvlieg’s hint and said the Department was considering granting an amnesty, it would have given journalists a story and encouraged those considering telling authorities about their exploitation to step forward. Instead, all that was halted by Dutton’s tendency for extreme caution (at best) in his dealings with the media. And then he complains that they don’t make him look good. — Myriam Robin

Prison post. “Every day, I reread what presumably would have been one of the last emails you sent that Sunday before they came for you and Mohamed and then Baher. In typical AJE style I was asking you about your next assignment even before you’d finished your current one.”

So begins a letter from the head of newsgathering in Africa for Al Jazeera English sent to Peter Greste, one of hundreds gathered (and thousands more sent) in a book being released tonight in Sydney, Prison Post: letters of support for Peter Greste.

The letters go from the personal to the distant. Many who did not know Greste wrote awkwardly, seemingly unsure of what to say, while others gushed forth with news from their lives and the countries Greste had visited. Letters from Egyptians, like that from NSW-based Mohamed Ibrahim, expressed sorrow for the actions of their motherland. The personal letters ache with sadness, hope and, occasionally, anger. Journalists like Yaara Bou Melhem, whose Dateline story sparked a national call to keyboards, wrote detailed accounts of Greste’s family, with whom she’d spent time filming her story. Many writers also referenced The Hoopla‘s letter-writing campaign for Greste.

The letters, Greste writes in the forward to Prison Post, got him through the 400 days he spent incarcerated.

“In prison, one of the most disturbing things is a sense of isolation — the fear that you are on your own, with nobody to fight your corner, nobody to shout by your side or get mad on your behalf. And, if you are genuinely innocent, caught in a painfully slow judicial system and with no obvious end in sight, the isolation can start to play games with your mind.

The thousands of letters he received, Greste wrote, were extraordinary.

“Some wrote simple messages … Sometimes the notes were wonderful, gossipy accounts of family life, reminding us that the ordinary and mundane is as beautiful and important as the dramatic and spectacular. And sometimes they were thoughtful, almost meditative, reflections on our situation … I even got poetry.”

The letters, Greste writes, showed he and his incarcerated colleagues two vital things. First, that they weren’t alone, and secondly, they gave their imprisonment meaning.

The letters were collected by Canberra publisher Editia, a relatively new publisher headed by Charlotte Harper, that has also published 18 Days: Al Jazeera English and the Egyptian Revolution, by former Australian Al Jazeera journo Scott Bridges. Tonight in Sydney’s Berkelouw’s Paddington, the book is being launched by Greste, and three of the letter-writers — school-girl Pippa Pryor, Wendy Harmer, and Brisbane mum Paige Garland. Profits from the book will go towards the Foreign Prisoner Support Service. — Myriam Robin

Images of war. Yesterday, images of a dead Syrian boy washed up on the beach appeared on the front pages of many of the world’s major papers, and were shared widely across social media. But the images shared also sparked a backlash, with many feeling the image’s ubiquity was disrespectful to Aylan Kurdi, the drowned boy, and his family. Many felt the image was invasive, and also questioned why it was necessary for people to see the image in order to empathise with refugees. But others, including The Age, pointed out that images of war had always been controversial, but in the long run, were often crucial in shifting public attitudes for peace and understanding. War as a concept, Rick Feneley wrote, is too big to comprehend for “too many of us, until Aylan made us feel it in our hearts”.

Crikey printed the image in this section through publishing The Independent‘s front page, for which we received a complaint. Some readers had been purposely not looking at the images, and weren’t expecting us to display it in the manner that we did. 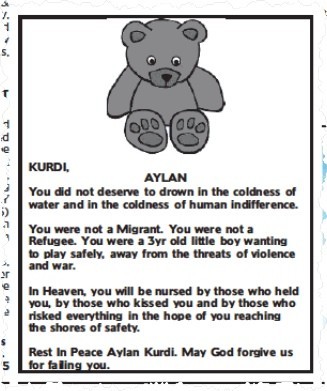 Bloomberg shed staff, rounds. Bloomberg is about to undergo a radical revamp, thanks to a major strategy change introduced by new editor-in-chief, John Micklethwait, the man hired away from the top job at The Economist earlier this year. Out goes sport, food and education, and music. In comes hard, focused business and finance reporting. An unnamed number of journalists were sacked yesterday in the US and around the world.

“This is not about downsizing; it is about refocusing our considerable resources,” Micklethwait wrote in a widely leaked memo. “Our purpose is to be the definitive ‘chronicle of capitalism’ — to capture everything that matters in global business and finance.”

He then goes on to explain how Bloomberg plans to refocus on its old strengths — business, finance, markets, economics, technology, and power (namely, government and politics) — while staying ever mindful of its core audience (“the clever customer who is short of time”).

“Bloomberg is still too focused on developed markets, established finance and the Western world (especially America),” he wrote. “By contrast capitalism is moving to private markets and the emerging world. To chronicle it, we must follow it.” — Glenn Dyer

Front page of the day. “Donald Trump is not going to be America’s next president,” The Economist‘s briefing confidently declares (despite the cover). 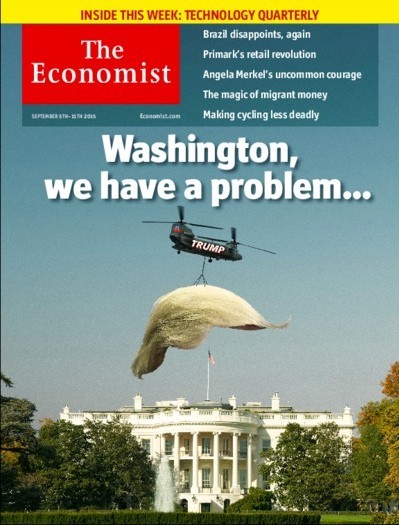