Keeping up with the Abbott era of comedy-politics is hard

The government's current performance is so appalling what were once show-stopping political moments now go by barely noticed. 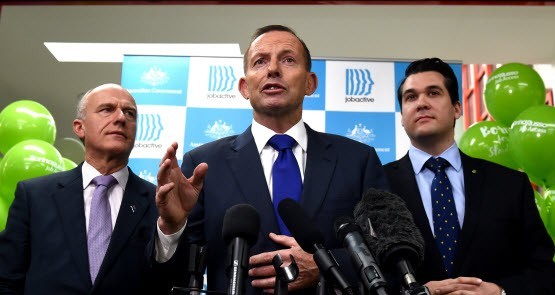 One of the characteristics of the new normal of Abbott-era politics is that remarkable political moments, of the kind that even during the turbulent Rudd-Gillard years would have halted the political media cycle for a day or two as politicians, journalists and commentators obsessed about their meaning, are now so frequent that even keeping track of them, let alone cogitating upon their significance, is difficult.

Thus, earlier this week in cabinet (it was reported initially on Sky News), Julie Bishop told her colleagues that Labor was running dead in Canning — something denied by Labor, but that is of no moment. Cabinet leaks in and of themselves used to be unusual — even for Labor cabinets with a certain former prominent trade union official in them. But the Abbott cabinet leaks like a sieve, one with the mesh removed and dropped in the ocean. There are so many leaks from the Abbott cabinet that journalists now quote the date and running order of supposedly secret cabinet discussions when they ask Abbott questions.

At his “we’re handing the banking cartel yet another big win” media conference with Treasurer Joe Hockey on Tuesday, Abbott even offered, unprompted, the news that Small Business Minister Bruce Billson’s much-vaunted effects test wouldn’t come before cabinet, then went on to outline how cabinet would be considering the rest of the Harper review response from Billson, who’d been rolled on the most important recommendation from this review of competition policy. It was almost as if Abbott figured that, given the effects test had already been the subject of a number of “cabinet split” stories, it was all going to leak anyway and he might as well get it out there.

But in the new normal, leaks are standard, almost de rigueur, so let us not tarry on them. The thrust of Bishop’s leaked comments was that Labor wants Abbott to remain prime minister, as the opposition benefits from keeping Abbott in position until the election, the eponymous Bernie in a low-rent political comedy stretching over 50 weekends until the next election. This was no-expectations management by Bishop — there’s no benefit to be gained in saying your opponent isn’t really trying, because any result then looks bad for you. Or, maybe, just maybe … was Bishop really subtly shaping expectations within the government, encouraging her colleagues to think that Abbott is the problem (which indeed he is) and that the Coalition’s chances of retaining power tend to involve getting rid of him?

That’s another aspect of the new normal — having to carefully parse every statement and every leak to determine who benefits and why they might have said it against a complex matrix of internecine fighting and sinking-ship survival strategies. Senator Arthur Sinodinos was on the receiving end of such CSI: Parliament House-style analysis on Monday when he opined — unprompted — that people backgrounding against Joe Hockey should be sacked. That of course is never going to happen, especially if it’s forces aligned with the Prime Minister himself who are undermining the Treasurer, which is the most likely scenario. But by drawing attention to something that wasn’t going to happen, wasn’t Sinodinos himself merely perpetuating an off-message yarn and thus damaging the government? And who really benefited from the Hockey stories anyway? Turnbull, the only political adult in the room? Scott Morrison, the minister who has the ear of more than a couple of high-profile journalists in the gallery? Hell, maybe even an outsider like Trade Minister Andrew Robb, who would surely do a better job in Treasury than the hapless Hockey?

Meantime there was Immigration Minister Peter Dutton declaring that the whole imbroglio over the Australian Border Force was a case of media hysteria — despite his office having had two chances to read the media release that caused the whole drama — and that, in any event, much of the media was out to get the government. Indeed, there was a media jihad, Dutton said, consciously invoking terrorism imagery, because for this government, virtually everything outside the economy is about the “Daesh death cult” or the CFMEU (and perhaps not before too long, a sinister amalgam of the two?). His embarrassed leader dismissed Dutton’s clumsy capering as “insider stuff”, despite Dutton — evidently incapable of working out when his own leader is publicly abandoning him — saying it to the media repeatedly.

Of course, in this Olympics of staying off-message, Tony Abbott himself can never be discounted, and he gave a sterling performance yesterday while straining to hype the “Daesh death cult”, in the course of which he popped out yet another Holocaust reference, which prompted criticism from Jewish groups and critical coverage from Israeli media. Logically, of course, Abbott’s comments were unexceptionable: it’s the government’s official position that Islamic State is the greatest threat to anything ever (and, no, I’m not making that up, Julie Bishop actually said that), which necessarily means that history’s greatest scourges — Hitler, Stalin, Mao, Pol Pot, Attila the Hun, the bubonic plague, The Bachelor — must be less dangerous than some Islamist militants with several hundred thousand rounds of US-issue ammo (thank you, America), a fleet of Humvees and a bunch of Twitter accounts. Fortunately, they’ll soon feel the wrath of the RAAF in Syria, making life easier for an actual genocidal butcher, Bashar Al-Assad (yeah, but at least he feels a sense of shame), on whose side we’ve decided to intervene as part of a Syrian mission that, as Defence Minister Kevin Andrews admitted last week, no one in the government had bothered “considering at the present time”.

That too passed, Rutger Hauer-style, like tears in the rain, just another day in the life of the Abbott government, an extended and elaborate comedy act at which no one is laughing. Indeed, as the economy circles the gurgler, the joke looks increasingly like it’s on us.

Border Force(Honk!)
Well said Bernard, interesting take on the Julie Bishop, Labor running dead comment. It would not surprise me if indeed that was the whole reason for saying it

The funny thing is how the viewsmedia doesn’t seem to want to obsess, let alone dwell, over Abbott’s self-inflicted wounds as much as they do or did Labor’s?
Our Curry or Maul yesterday was gushing two pages worth (“hilarious” photo-shop and all) over Shorten mixing his Subway with his 7/11 (two places he probably has no experience with?) – but “Passed” on Toady’s ISIS:Nazi percipience?