Pumping out more and more carbon emissions has never been easier than under Greg Hunt's pointless "safeguard" mechanism. 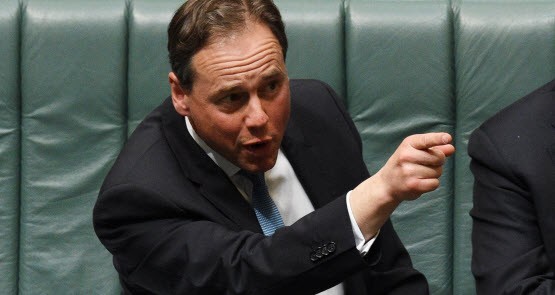 So you’re a major carbon polluter and you’ve read about Environment Minister Greg Hunt’s “Emissions Reduction Fund Safeguard Mechanism” and you’re worried the government might actually do something curb your carbon emissions.

Worry not — just follow our step-by-step guide to see how you’ll be completely untouched.

First of all — the only “safeguarding” is against your highest level of emissions of the last five years — the “baseline” is actually more like a “top line” that you have to exceed before there’s any risk that you’ll get pinged by the body administering the scheme, the Clean Energy Regulator. Here’s a picture to show this, with “time” helpfully marked on the x-axis. 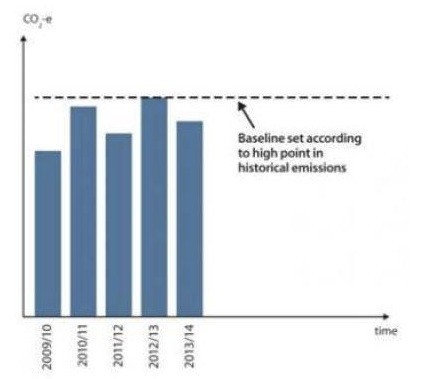 But if you actually want to use a “baseline” that’s above your highest level in the last five years, that’s OK too — just apply to the regulator for a higher baseline claiming that the last five years don’t reflect “business as usual”. And here’s the best part — when you apply, you get to say what you think the baseline should be — all you have to do is hire an auditor to “independently assess” your baseline. Cool, huh?

Of course, there’s the small difficulty that you might want to actually produce more emissions that might take you over your baseline. But that’s fine — there’s a whole array of excuses you can use to avoid getting into trouble! If you grow your business by more than 20%, just get your auditor to “independently assess” what your baseline should be under your expanded operation and tell the regulator. If you grow it by less than 20%, you can get an “independent assessment” that your emissions intensity — that is, emissions per unit of production — has fallen, and you can lift your baseline. It doesn’t have to have fallen by a lot — the tiniest fraction will do — which, let’s face it, you’re likely to do anyway if you’re merely increasing your production from existing capital and equipment.

Now you’re probably worrying that despite all that, you might still end up accidentally pumping out more carbon than your baseline. But that’s OK — because if you do that, Greg Hunt has put in a special mechanism so that you can average your emissions over three years rather than one, so you won’t have to worry for at least two years. And if you keep going over your top line, you can use the resources excuse — if you use minerals, coal, oil and gas in your business, you can claim that they made you produce more emissions, and everything will be fine.

And if you want to open up a you-beaut new emissions-intensive facility, you don’t have to worry — just provide your own forecasts of what your new emissions, and the regulator might get around to checking you actually met them some years from now.

Oh and by the way, for good measure Hunt’s thrown in a vaguely worded exemption for polluters who can claim that “natural disaster” or “criminals” have helped push your emissions up as well. Criminals! Nice one, Greg. Don’t forget that one, although you’d probably have to be a bit desperate to actually use it.

Now, if after ALL that, you still go over your baseline and can’t find a valid reason why you should be exempted, don’t panic. You can go and buy some permits from the other part of Hunt’s “Direct Inaction” scheme, where he hands out taxpayer money to companies to undertake emissions abatement or energy efficiency projects they were already going to do anyway. And most likely you’ll also be able to buy international permits, from what Tony Abbott once called “dodgy carbon farms in Equatorial Guinea and Kazakhstan.”

Of course, if you don’t actually want to spend any money to evade your emissions “obligations”, that’s fine as well. Because there is no guaranteed punishment: the sanctions for exceeding your baseline are like the “sanctions” that are applied to TV networks when they breach their own codes of practice — you’ve got to go through multiple layers of infringement notices and enforceable undertakings and breach findings before you might possibly risk getting a fine. But that’s all up to the government-appointed regulator to decide. In fact, the government’s own documents, and Greg Hunt, say they’ll never collect any money from it, and it’s a “last resort” anyway.

Got all that? Go now, and pollute in peace.

Direct Inaction: nothing much green in Hunt’s white paper

Why does Minister Hunt and the Cabinet membership that directs him . . bloody well bother?

A Policy so blatant, so cynical, so entirely irresponsible and deceitful in objective . . naught but spittle on face of Electorate!

Thank Ch*&#t it will all be over in twelve months. Surely there are not enough morons left in this country who will vote to return the likes of Hunt and his fellow travellers?

Some days I despair. Other days I see the tsunami of solar and hear better batteries are coming and know that the old will pass.

Stop..stop..please, it’s making me ill. It seems like offering children open access to the sweets jar, with extras for… excess.

Don’t worry, big polluters, Hunt’s ‘safeguard mechanism’ won’t cost you a thing. And he has loot for all to decrease emissions, yes loot, taxpayer monies. How will the LNP pay for it? Just up the GST by a few percentage points, and widen the GST net. If that’s inadequate to cover the loot to lessen the pollute, we the LNP adults in charge are now working on winding back the NDIS.