Foreign correspondents rely heavily on people known as "fixers". But what do they do exactly? And at what cost? 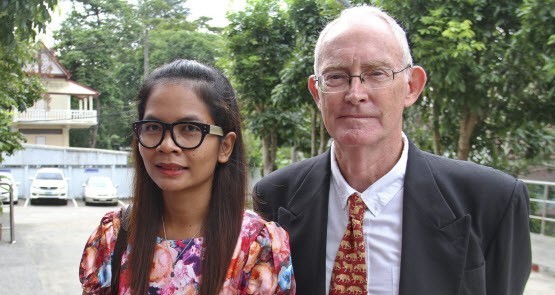 Journalists Chutima “Oi” Sidasathian and Alan Morison are now free, after a Thai court acquitted them of defamation and computer-crimes charges earlier this week.

But Reuters abandonment of the journalists as the trial got underway still grates. Speaking to Crikey earlier this week, Morison, a former news editor at The Sydney Morning Herald and The Age who now lives in Thailand and edits the Phuketwan website, made heavy reference to the way his colleague had been treated by the global wire agency.

“When Reuters engaged Chutima as a fixer in 2013, they got contacts that had been built up over three years in a matter of days, but she was never given proper credit for this,” Morison said.

But as Reuters collected a Pulitzer prize for its coverage of people-smuggling in south-east Asia, Sidasathian and Morison were slapped with criminal charges. Reuters did not comment on the case, offer aid or even contact them, Crikey has been told. The wire agency has not returned Crikey‘s requests for comment.

The case is a stark demonstration of the heavy risks taken by fixers, and the ease with which former associations can be dropped by the large news organisations who use them.

Fixers are locals in countries in which Western journalists are reporting. They are often local journalists or professionals, who translate for and guide journalists that fly into a country to report on a story there. As the ones with understanding, contacts and knowledge of an area, they often play key a role in suggesting and giving journalists stories. They provide logistical support, helping journalists navigate foreign terrain. The best fixers are often local journalists who will give foreign journalists scoops — helping them find stories no one else has done before. They are usually well compensated for this, but the role involves big risks. In areas where journalists are generally unpopular or targeted by the government, fixers are easy targets. They’re the ones who stay behind, after all.

Jose Belo is an East Timorese journalist and editor who was pivotal to many Australian news organisations’ coverage of the East Timorese independence struggle. A former resistance fighter, he has worked for the ABC, SBS, Channel Seven and Channel Nine as both a fixer and a stringer (a stringer is essentially a fixer on an organisation’s permanent payroll — both to ensure their exclusivity and to help the home operation keep abreast of developing stories).

Commenting on the Phuketwan case, Belo says he’s saddened but also not surprised at how it transpired. “When you work with big organisations, it can happen like that. They look out for themselves.” At the very least, Belo says, he’d have thought Reuters had a responsibility to put out a statement, or send a lawyer. “You have to be careful. When you’re a good fixer, they get the benefits, and then they leave. They get the awards, and you can end up in prison.”

Fixers aren’t always abandoned by the journalists and news organisations they support. “I’ve been very lucky in who I’ve worked for,” Belo says.

In 2009, he was charged with criminal defamation in a case brought by East Timor’s justice minister, after Belo, through his newspaper Tempo Semanal, published reports accusing the minister of corruption.

He tells Crikey many Australian journalists campaigned heavily to see the charges against him dropped. Australian journalists and news organisations sent petitions and lobbied East Timorese officials right up to the president, urging for reform of an East Timorese law that made defamation a criminal offence. “It helped,” Jose said. “Because of my case, defamation is not a crime any more in East Timor. Media outlets, unions and individuals sent letters urging the government to decriminalise defamation. And they did.”

Deakin University academic Colleen Murrell wrote a book on fixers released earlier this year, Foreign Correspondents and International Newsgathering: The Role of Fixers. It details how pivotal they are to global newsgathering, in ways you might not always expect.

“I spoke to ABC correspondent Zoe Daniel about being a correspondent in South Africa,” Murrell told Crikey earlier this year. “She’d take a fixer to dangerous places — not to broker interviews, but just a bit of help with safety.”

Good fixers are often in constant contact with global news organisations. They might, for example, visit a local police station every day to check on the progress of a case. In parts of the world where things aren’t widely publicised online, this can be the only way global news agencies stay abreast of certain stories.

Foreign correspondents who are permanently based in a country do also use fixers, but given their familiarity with a situation, they can often be better placed to both handle situations, including helping their fixer should difficulties arise. But as these types of positions are slashed in favour of parachute journalism, where reporters fly in to do one story and then fly out, the reliance on fixers by global news organisations is increasing, with all the associated risks that brings.

Asked what had motivated him to become a fixer, Belo said he and many fixers want foreign journalists to report accurately on their country. “We don’t want them to mislead. We all want this information to get out.”

“But when fixers get injured, or in trouble, there’s no insurance. It’s very easy for a news organisation to say there’s no contract with you — no agreement. They can just wash their hands.”

Crikey Land Denizens must be extremely grateful their Capitalist Enterprise can publish any sort of rubbish without endangering themselves.