Should Shaun Micallef be watching his back? ... rumblings in Western Australia ... turns out you can't get fit sitting on your bum watching TV ...

Greetings from the Death Cult. “Allahu Akbar, welcome to the jihad.” So said Charlie Pickering in his off-camera welcome to the audience at the taping for this year’s final episode of The Weekly. According to a tipster who attended last night’s taping, Pickering described this as a “traditional ABC greeting” — a comment bound not to be taken seriously by anyone, save for our taxpayer-funded Immigration Minister, Peter Dutton.

But the most tantalising bit of gossip came in response to a question from the audience on future production plans for the show. Crowd-man Danny McGinlay (trust the loose lips of the warm-up guy) assured the audience that not only would The Weekly be returning next year, but it would be returning with an even bigger budget and would likely go to air from February (Dutton’s backlash pending, we presume).

This leaves Ms Tips more than a little curious, given February has, for the past three years, been reserved for premiering the newest season of Shaun Micallef’s Mad As Hell, which appeared in the same 8.30pm timeslot before The Weekly took over in late April. And as Ms Tips reported at the time, The Weekly only had room to grow because Mad As Hell had been denied a second run in 2015 due to budget cuts. But now we hear Pickering’s budget has increased, and he will be nabbing Micallef’s launch date. Well, we’re sure Bob Dylan wrote a song about this …

Fire from all sides. Another week, another blistering column from The Australian‘s Nikki Sava, this time with Liberals from the West dumping on Prime Minister Tony Abbott:

“Yet in the lead-up to the Prime Minister’s visit to Perth a fortnight ago, efforts by the Liberal Party to organise a fundraiser began awkwardly and ended in acrimony. The party wanted 10 people to pay $20,000 a head for the privilege of privately meeting Abbott. According to well-placed members of the party, there were only four takers, two of whom were prepared to pay but not attend, so reluctant were they to be in the same room as Abbott — one because he was so disappointed in Abbott for not delivering the stability and confidence he had promised, and the other because despite promises of no new taxes, the government had imposed the high income levy.

“To fill the table, it was decided to halve the price. Those who had paid the full amount were furious when they found out. According to sources they have been demanding half their money back.”

It’s quite the story of a bungled fundraiser — if Abbott is putting people off handing over their dough it does sound like the party is in a bad way. Last week it looked like Scott Morrison was putting the word out that he was in the good books with media mogul Rupert Murdoch, but who is trying to get the upper hand here? A popular westerner with a penchant for emojis? Just askin’.

What’s going on at SBS? It’s been months the since the SBS ad averaging bill failed to pass the Senate (after disparate opposition from Labor, the Greens and a few independents), and while the organisation said the failure of the bill would force it to cut into content to find the $28.5 million over four years that was cut from its budget in November — no big cuts have been made yet.

The SBS board met last Thursday, but no announcement was made afterwards. When the bill failed, SBS said it would have to examine its business and report to the government before making any decisions, and it may be this process that’s dragging out now. Crikey has been told SBS is in negotiations with Abbott’s office, as the ad-averaging bill and the budget cut were announced as part of a total funding package for SBS. With ad averaging failing, perhaps SBS is arguing that the budget cuts shouldn’t happen either.

The man leading SBS’ contact with the government is now acting corporate affairs director Todd Loydell. He’s replaced Peter Khalil, the organisation’s former corporate affairs, comms and strategy director, who left on July 31. Khalil was a big fish — a former defence adviser to Kevin Rudd who regularly fronted the Senate to argue SBS’ case. His departure was somewhat curiously not announced by SBS. Loydell, who’s worked with SBS since 2013, has political experience from the other side — he’s worked for a number of NSW and federal Liberal MPs.

Gut punch. In shocking news that will no doubt challenge the abdominal core beliefs of many, the Australian Competition and Consumer Commission has forced Danoz Direct to admit that its “Abtronic X2” belt that offered to give you defined abs and cause you to lose weight without any change to diet and exercise … uh, doesn’t do any of those things. Who would have thought? Possibly the strangest part about the release yesterday is that it is very similar to another one from 12 years ago almost to the day. This was apparently a different Danoz Direct selling another product also called Abtronic, which made very similar claims that could not be substantiated.

The ACCC states that the two companies are different legal entities, but Deidre Chambers, what a coincidence!

If you’re wondering who is buying the products? Well the original model sold over 94,000 units in Australia and Danoz made $14 million.

Democracy to the people. Victorian Senator Ricky Muir, like the little V8 that could, is continuing in his efforts to be a senator for the people, updating his website to include a form where people can tell him how to vote on particular bills. It’s a nice gesture, but we especially love the answer options for “have you conducted your own research on the bill?”. How many politicians would answer either “no, but I had someone explain it to me” or “no, I have relied on a lobby group, issue campaign or political party”? 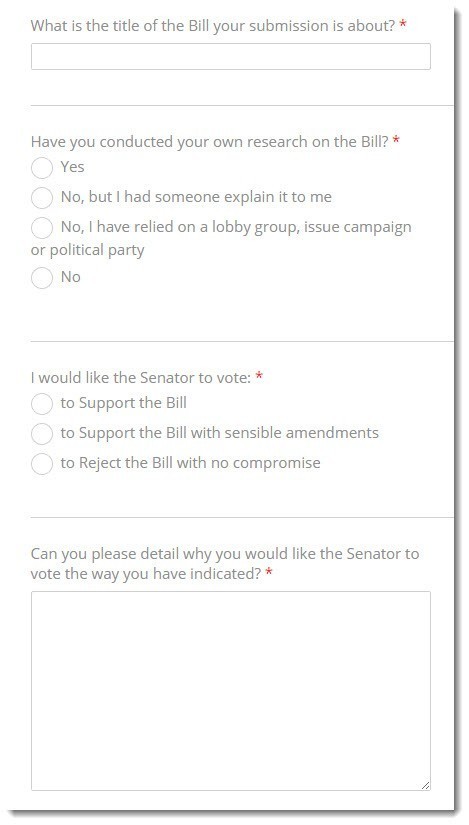 Pics or it didn’t happen. Earlier this week we reported that Crikey alum Amber Jamieson had featured in a traffic-stopping front page in The New York Post, where she was pictured in strategically placed body paint and little else. It was also noted by Strewth’s James Jeffrey, who used it as an opportunity to prod our own Bernard Keane — who promised a nudie run earlier this year, of which evidence is scant. Earlier today AJ gave the best take on the topic:

SBS gets another $9m as ad averaging failure continues to bite

I had never heard of Charlie Pickering before his his show started and it took a little bit of time to warm to him. But now I really like him, he is incisive and unrelenting in his attacks on bad government. I welcome the news that he may be back with more funding. I thought Fraudenberg or whatever his name is was brave to appear last night but it was encouraging to see him. I think he is OK and hopefully the Libs have more like him, it really is time for generational change in the Liberal Party.
Defeat at the next election should ensure that all the incumbents are thrown out of the cabinet and our democracy will be the winner.