This is Abbott’s Dubya moment

Tony Abbott seems determined to bog Australia down in another war in the Middle East, even though it is bad for Australia and even bad for Abbott himself. 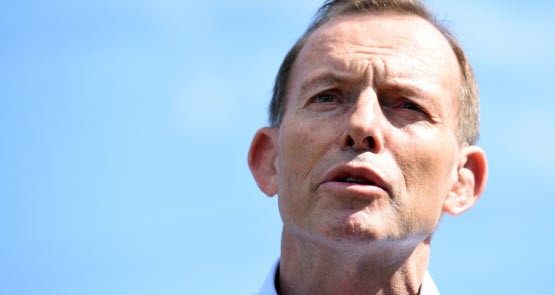 If the 2003 attack on Iraq gave invading Western nations anything more than bad dreams and blowback, it was a boost to conspiracy hobbyists. Those with an interest in both statecraft and suspicion developed an opinion on the “real” reasons for the US-led invasion, and these ranged from “blood for oil” to fantastic stories about Dick Cheney’s personal fortunes to Saddam Hussein’s fatal preference for trade in euros, instead of dollars. There had to be a reason for all those corpses.

As it turned out, there wasn’t much of a reason at all. While it’s true that petrodollars poured out of Iraq and capital flowed into Halliburton, it’s also true that the spoils of war are not always the spur for war. If you’re looking for the “real” reason for this war, good luck. Even the most clear-headed realist thinkers on the conflict are unable to determine its strategic basis.

George W. Bush was advised that this would be a long and not especially profitable bloodbath. But sometimes, leaders go to war because they’re twits who prefer to take their foreign policy from Disney’s Aladdin instead of the State Department.  Across the past decade, Bush has emerged as one of history’s notable twits — even the most ridiculous US presidential nominee publicly calls this war a mistake.  As Tony Abbott progresses in joining US airstrikes on Syria, he also inches towards the possibility of becoming a total twit — even by the low, low standards of Donald Trump.

This is Abbott’s Bush moment, and it is one he is inhabiting with such blind unreason that even to call it mission creep is generous. Against considerable advice and for minimal gain, he seems determined to be a twit.

Lowy Institute West Asia expert Dr Rodger Shanahan has told press that the operation would not be strategically significant.  Vice Admiral David Johnston, Defence’s Joint Chief of Operations, warned that airstrikes in such a complex theatre would achieve very little. In a nation even Abbott himself described as contested by “baddies versus baddies”, a Super Hornet doesn’t offer much precision in attack. It’s especially difficult to know which “baddie” you’re bombing in the multi-dimensional Syrian conflict, which is why the US maintains an Iraq-first approach in the region.

Still, Abbott maintains that he was asked to war prom by Obama. Let’s suppose that this is true and that Abbott did not, as reported by Fairfax media, plead with the hegemon for an invitation. Let’s make-believe that Obama has said Australian support would be useful or even noticed next to the Turkish Air Force fleet.  And let’s even ignore the possible strategic and legal errors of acting without Security Council approval or outside international law and ask: is Abbott really obliged by the US to dilute Team Australia’s efforts in Iraq and commit it to an even more unwinnable game in Syria?

With military analysts suggesting that his reasons are inscrutable, the answer is probably no. People like Shanahan and Johnston don’t just overlook the importance of our alliance with the US before they speak. Often, we must join the conga-line of suckholes and in 2003, our middle power presence in Iraq, however deeply unjust and falsely humanitarian the conflict, was demanded. There was no refusing Bush’s maniacal dance, and if Mark Latham had shut up enough to become prime minister, you can be pretty sure he too would have learned to move in time.

Now, though, things are different. Obama’s commitment to cleaning up his predecessor’s mess is pretty slight and he’s not going to give these final months over to history.  The guy who recently said “gun-related incidents around this country dwarfs any deaths that happen through terrorism” is not going to bully us, or anyone, into another coalition of the willing. Abbott could easily refuse the “invitation” without real risk to the loss of our most important ally.

Of course, he risks loss in Canning or in next year’s federal election. It’s very likely that Abbott is counting on a khaki vote. But perhaps even these potential votes will be the spoils and not the spur for war.

The truly terrifying thing about Abbott, like the truly terrifying thing about Bush, is his ardent belief. He believes in this war, and he seems increasingly to be unable to separate his passions from his policy. Just as Bush believed entirely that his stupid, expensive, legacy-trashing actions in Iraq were grand strategy, Abbott believes that his personal morality is the best basis for foreign policy. Or marriage equality or asylum seekers or Aboriginal Australia. He has begun to act not only against the national interest but against his own interest when he really believes.

If there is a truth to be revealed about Abbott, perhaps it is that he is, like Bush often was, very sincere. If there’s something more frightening than the thought of a leader in service to oil or even to his own re-election, it’s the thought of a leader in service to himself. That Abbott believes himself to be truly humanitarian is a “conspiracy” we’re largely unprepared to entertain. Perhaps we should, because there are few leaders more terrifying, and more guaranteed of sustained power, than genuine ideologues.

These days it cannot be about oil as the US is now a major exporter of hydrocarbons. So it must be about something else.

And the political and social wreckage of US wars in the area has led to a flood of migrants into Europe.

So what is worth all the angst and cost?

There are rumours online that the amazing early civilisations in the area were more amazing than publicly known – and that the remarkable constructions and artifacts were produced using remarkable technology. Could the technology be still there, concealed underground as done by the Nazis when their war was lost?

@Aethelstan “it reeks of cynical manipulation … but maybe he is just being a twit”. May I suggest that he is both. Worse, he is a dangerous ideologue who, as Helen suggests, puts his own peculiar and warped 19th century belief system ahead of the national interest.

They had theirs – we got ours, and we both got FUX.