Police move ABC journos on from filming outside a police barracks. Plus other media tidbits of the day.

Snub not national. Yesterday, Crikey reported that the Torres Strait’s local newspaper and radio station (broadcasting in indigenous languages) weren’t included on the PM’s media delegation to the Torres Strait, even though both asked his office to attend. In the remote Torres Strait, it can be hard to get around without a charter plane, and neither outlet would have been able to cover the PM’s visit had it not been for the generosity of local communities, which rallied together to get the Torres News’ editor to many of Abbott’s events.

While the local media wasn’t represented, the PM did extend an invitation to some of the nation’s indigenous media. NITV, which has journos in the press gallery, was invited along, but didn’t send anyone — NITV is part of SBS, and SBS sent along political reporter (and former NITV journo) Brooke Boney. Sky News, meanwhile, sent along national indigenous reporter Dan Bourchier, making at least two reporters of indigenous heritage in the delegation.  — Myriam Robin

You can’t film here. Yesterday, a group of ABC journalists filming a piece to camera outside the Victoria Barracks in Melbourne were confronted by three uniformed police officers and asked for ID.

Crikey understands the journalists didn’t hand over ID, but they did give police their names, and police took down their car registration. They were told Section 82 of the Defence Act (1903) gave police the right to stop them filming, but that this had only started being enforced recently due to the “current situation”. The act lists a fine of $200 or six months jail for filming any defence installation without authority to do so. Defence media eventually gave the ABC journalists authority to film, but they’d already moved on. — Myriam Robin 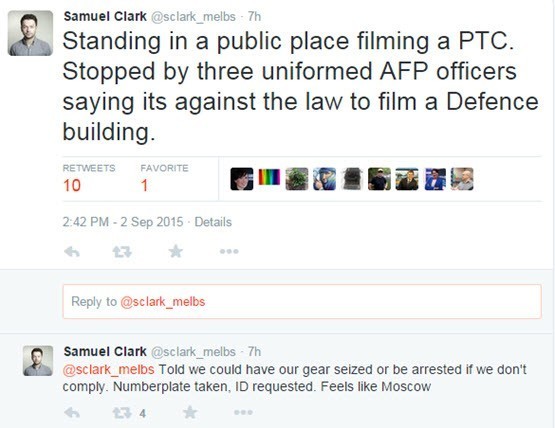 A celebrated executive. Overnight News Corp announced (though we all already knew) that Rebekah Brooks would return to run the UK operations of the Murdoch empire. She starts on Monday.

News Corp’s formal announcement of her return was a Murdochian masterpiece in avoiding the obvious.

“Rebekah Brooks was Chief Executive of News International Ltd from 2009 to 2011, during which time there was significant growth in newspaper operating profit, and The Times was a pioneer in paid-for digital subscriptions. Between 2003 and 2009, she was Editor of The Sun, and from 2000 to 2003 she served as Editor of the News of the World. She started her career at News of the World as a feature writer for the publication’s Sunday magazine in 1989.

“While she was at The Sun, the publication grew in circulation, and she supported a number of public campaigns, including Help for Heroes, a charity for soldiers wounded in war that raised tens of millions of pounds. At News of the World, Ms. Brooks spearheaded a campaign that led to the introduction of legislation combating child sex offenders known as ‘Sarah’s Law’. She was unanimously cleared last year by a jury of all charges related to investigations of various UK newspaper groups.”

Aside from the last line, there’s no mention of her time at the now defunct News of the World and its phone hacking, nor at The Sun and its claimed bribery of public officials, which forced her out of the warm embrace of the Murdochs in July 2013 and the closure of the paper at a eventual cost of more than US$1 billion in legal bills, redundancies, missed revenues and profits.

While the release paints the phone hacking as behind News Corp, it isn’t entirely. Chris Pharo and Jamie Pyatt are two Sun journalists who worked under Ms Brooks. The duo face retrial this month on charges of payments to public officials, and Britain’s Crown Prosecution Service is also considering whether to bring a corporate prosecution against News Corp. If the CPS does launch a prosecution, it will tell us that the Cameron Conservative government no longer feels beholden to the Murdoch empire. The decision will be one of the most important in relations between the UK political establishment and the media, especially with the controversial national referendum on continuing British membership of the EU. The EU is one of Rupert Murdoch’s least favourite subjects. — Glenn Dyer

Front page of the day. A Syrian toddler washed up on shore as thousands of refugees seek entry to Europe … 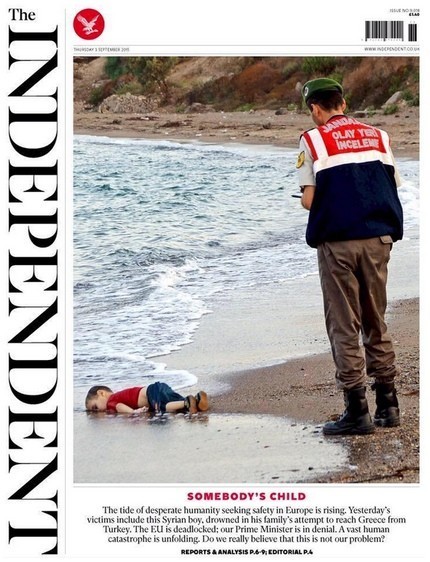 Is it too much to hope that Brooks will be a tad more alert this time around, actually aware of her staff’s activities and reporting methodology. Because, according to her sworn evidence, she previously had no clue.

Brooks is proof you can return a turd back to where it came from.

Any more evidence of the parlous state of newsmedia needed, especially at Limited News?
How much was this dim bint paid to either know nothing of what was going on under her – or be paid to be of some sort of unspecified in-house service elsewhere?

Front page of the day…
What a terrible indictment on the world.
But no one seems to care.