The Hazelwood Mine Inquiry hearings in Morwell have heard it is likely that the Hazelwood mine fire caused deaths in the area. 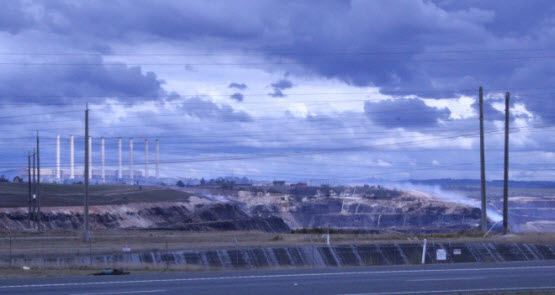 A panel of statisticians has concluded that it was likely that there was an increase in deaths in the Latrobe Valley between February and June last year following the Hazelwood mine fire, which covered the town of Morwell and surrounding areas in smoke and ash for 45 days.

The Hazelwood Mine Inquiry hearings in Morwell this week — which are looking specifically into whether deaths occurred as a result of the fire — are part of a wider inquiry, which was reopened by Victoria’s Andrews government this year. The Hazelwood mine fire began on February 9 last year, and the open-cut mine burned for 45 days before being declared safe by authorities. Since the fire, locals in the Latrobe Valley, especially in Morwell, have campaigned for answers, believing that the fire had adverse health effects about which they weren’t properly warned.

The statisticians, including Associate Professor Adrian Barnett, who has previously written a report stating that there was a higher rate of deaths last year than the average of the previous five years, looked at data from Births, Deaths and Marriages to try and determine if locals had died because of the fire. Professor Bruce Armstrong, an expert in cancer causes, told the hearing today “an increase [in deaths] was most likely due to an increase in particulate matter, most likely due to the mine fire”.

At the hearings yesterday, it was revealed that former Victorian chief health officer Rosemary Lester had sent an email in which she said she took “comfort” that deaths in the nearby town of Moe had also risen during the time of the Hazelwood Mine Fire, given Moe’s distance from the fire.

The hearing heard from Lester as well as University of Melbourne academic Louisa Flander, who was commissioned by the Victorian Health Department to investigate whether deaths had occurred because of the fire. Locals have accused Lester and the Health Department of playing down the health impacts of the fire.

In an email to Flander, Lester wrote: “One of the things which gives us comfort that this is nothing more than random variation is the the increase was greatest in the Moe postcode which is 13 km away from the fire.”

Wendy Farmer, president of the community group that pushed for the inquiry, Voices of the Valley, labelled the comment “disgusting”.

“I wonder if the families of the people who died in Moe think that way. How dare she say that?”

Lester has also been questioned about her level of involvement in the report commissioned by the Health Department, and the number of drafts that were made. In yesterday’s hearing, Flander opened her statement by emphasising that she was not a statistician.

“I am not a statistician, I am an epidemiologist,” she said. “I have no experience of doing these kinds of consultancies — this was my first.”

“We have amended the report in line with your suggestions about clarity and definitions, in consideration of the target readership.”

“We have included as well a revision to the linear regression analysis, to highlight the Morwell postcode observations that demonstrate the inconclusive nature of the LV [Latrobe Valley] mortality data.”

Farmer said the community felt vindicated by the hearings, but it was disappointing to hear the way in which the report had been handled. “They put a lot of effort and money into trying to discredit us.”

Farmer said litigation wasn’t the goal of Voices of the Valley. “It’s up to people personally,” she said. “We just wanted the truth.”

What about demanding a Report on how many deaths may have occurred because of inept Green-inspired actions which resulted in safe alternative sources being blocked by intellectually-blinkered Greens ‘elites’ galloping around on NIMBY and other metaphorical Rocking Horses?