The Prime Minister did not invite the local media to join his official delegation during his recent Torres Strait trip, but thanks to the generosity of the community the local paper was able to be present anyway. 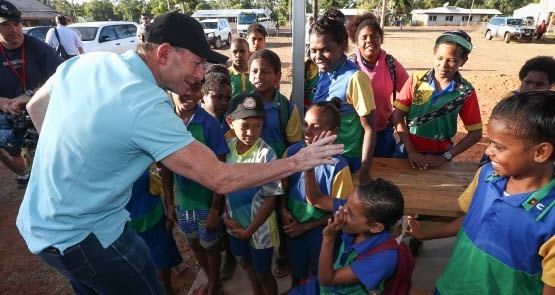 About two dozen journalists accompanied the Prime Minister last week on his five-day trip to the Torres Strait. But no local media was among them, as neither weekly newspaper Torres News and 4MW Radio, which broadcasts in the four languages most used in the Torres Strait, were included in Tony Abbott’s media delegation.

Getting from place to place in the Strait isn’t simple. One needs a charter flight to go to many of the remote places visited by the Prime Minister, so not being included in the delegation meant it was difficult to cover the highly anticipated trip.

Torres News editor Aaron Smith told Crikey that he and 4MW had been in frequent contact with the Prime Minister’s office about joining the delegation and had never got a firm “no” — they just never received a definitive response. But when the local community discovered the only newspaper in the Torres Strait wouldn’t be on the delegation, it banded together to get Smith to many of the locations the Prime Minister was visiting.

The big event of the trip was the Prime Minister’s visit to Murray Island — the  birthplace of native title. “Word got around that I wouldn’t be there, and next thing you know, people in the community made room for me on a charter flight. I was flown out the day before.

“The community put me up. We don’t have a budget for that sort of thing. The Torres News is run on the smell of an oily rag. But the community put us up, fed us, and even drove us around.”

The local member also played a part — at a welcome dinner at the Gab Titui Cultural Centre, the Torres News reported Leichhardt MP Warren Entsch personally intervened to make sure the paper’s reporter attended as his guest.

Covering the PM’s visit independently appears to have come in handy at times. One night, when Abbott was hosted by the Injinoo community in Queensland’s tip, he was served lobster — a messy thing to eat. The PM’s media minders put all the journalists back on the bus, but Smith, who was staying with one of the local elders, was able to stay. Today’s issue of the Torres News details the crustacean encounter. “Don’t take photos of the Prime Minister eating,” Smith was advised (he said he wasn’t interested in that). “I wasn’t part of the gang, so I could do as I damn pleased,” Smith told Crikey this morning.

At a local business leader’s forum the Torres News appears to have been accidentally invited to, Abbott, who was placed on the same table, asked whether there was a crayfish industry in the region (there is — it’s one of the largest). Smith says the PM’s media minder leaned over and stopped his recording, saying that comment had to be off the record — it’s reported in today’s Torres News.

Media on the delegation, Smith says, was kept to Abbott’s tight schedule, which started at 5.30am and ended late every night. The Prime Minister conducted several closed-door meetings with local councils, which, Smith says, were probably the only time the media delegation was given room to breathe and get their own stories. He notes even national media appear to have had a hard time getting on the trip — the Torres News reports the media delegation was only organised by the PM’s office after several major outlets, including The Australian, took steps to organise their own charter.

One story that was picked up nationally during the trip that certainly wasn’t part of the government-controlled media narrative was that of the Jardine Motel. The Department of Prime Minister and Cabinet had booked out most of the Thursday Island establishment, but cancelled the booking at the last minute, after the Prime Minister opted to stay at the 51st Army Barracks instead. Hotel owner Steven Mills said he was out of pocket more than $50,000, as he now had an empty motel at the height of tourist season. He says he was offered $30,000 from PM&C in compensation — the department said it was in discussions with him about a “fair and reasonable cancellation fee”.

Senate estimates show last year’s August trip to Arnhem Land cost the department at least $86,000, but this figure didn’t include flights and some other costs. The PM&C took a question on notice about the total cost of the trip, but responded to say the cost had not been finalised. In another answer to the Senate, it was revealed $24,550 was spent in putting up the media delegation at Nhulunbuy’s Walkabout Lodge during the seven-day trip — this cost was “recovered” from the media.

Crikey contacted the Prime Minister’s Office to ask whether the Torres News‘ account was accurate, as well as whether it was normal for media delegations on such events to not include local media. We also asked whether any other indigenous media was included on the delegation. We didn’t get a response before deadline.

Our MPs are embracing Asia — but one country is missing out

Bypassing the filter: Abbott snubs journos in Iraq, but will it work?

If Abbott peed in the forest and there was no media around, would anything get wet?

Klewi – possibly, but not very far from his feet.

Instead of Crikey’s usual diet of poor quality ‘humour’, today we have a serving of nonsense news which might well be dubbed “raw pawns”. That’s certainly Crikey for you, but it’s a diet of which Crikey Denizens apparently can never have too much.

Community support speaks well of the Torres News. I wouldn’t hold a door open for the Herald Sun.