Hastie relations? Prime Minister Tony Abbott is in Western Australia today to lend his support to the Liberal candidate for the seat of Canning, Andrew Hastie, the ex-SAS officer who seems to be have come from a 3D printer programmed with Tony Abbott’s dreams. In a profile in The Saturday Paper this weekend, Hastie told the Liberal Party’s Western Australian state council an anecdote about his childhood:

“‘I was born in regional Victoria in a town called Wangaratta,’ he said. ‘My father started a church there from scratch and I travelled with him in the early years around the vast parish … I have sweet memories of those times.’

“A little later in his speech, he identified himself as a regular churchgoer and spoke about the work he and his wife do with their church group.”

Mike Seccombe noted that it was only in conservative politics where job applicants emphasise their religious views, and it seems that Christianity plays quite a role in Hastie’s history. A tipster tells us that the candidate’s father is Reverend Peter Hastie, currently principal and pastoral dean at the Presbyterian Theological College in Melbourne. Peter Hastie has been published on website Creation.com, including an interview with Creationist Jonathan Sarfati and an article disputing science textbooks’ explanations of evolution. We contacted Peter Hastie this morning to ask if he was Andrew Hastie’s father, but didn’t hear back by deadline.

Mmmm, that Kool-Aid sure tastes good. Just a month ago, Australia’s Small Business Minister, the eternally cheery Bruce Billson, was lambasting Labor  for not supporting an “effects test” in competition law. That’s a recommendation of the Harper competition review that would lower the threshold for prosecutions of companies for misusing market power — currently the Commonwealth has to prove companies acted with anti-competitive intent, rather than simply that their actions had the effect of substantially reducing competition. Labor, the economics ministers within the government and the Business Council of Australia all oppose the effects test. Talking to Alan Jones (who backs an effects test) in early August, Billson lamented Labor’s opposition: “I cannot possibly imagine why, other than they have drunk the Kool-Aid that the Business Council of Australia are putting around.”

Well, yesterday the government punted Billson’s effects test into touch, or possibly out of the stadium altogether — he took the government response to Harper to the cabinet, but not, the Prime Minister admitted afterwards, the effects test — possibly because the brains trust was worried the ensuing animated discussion might leak like everything else leaks from that cabinet. The effects test is now on hold, most likely for good — maybe the PM was also worried that Hockey losing the effects test battle would add further fuel to those “Hockey for Minister Without Portfolio” rumours. But presumably, once they finished discussing the rest of Billson’s response to the Harper review, ministers slaked their thirsts with a nice big drink of Kool-Aid.

Pony up. In July we noted that a rise in the price of a digital subscription to the Herald Sun made it more expensive than a digital subscription to The Australian — like newsprint on your fingers, we said, paying more for a broadsheet was a thing of the past. Well News Corp must be listening (hi!), as this week marked an increase in both the cover price of the Oz and a digital subscription. A dead tree version of the paper will set you back $2.70 at the newsagents (up from $2.50), while signing up online only will cost $8 a week. So while we’re all moving into the brave new digital world, News is making sure its price points stay in the past.

HRC’s correspondence. Royal Commissioner Dyson Heydon isn’t the only one to be having email problems in the media this week, with Democratic presidential hopeful and former US secretary of state Hillary Clinton releasing another batch of emails sent from her personal email address about state business. Of course, not all the emails are related to affairs of state. This email to a staffer shows that while Clinton can use email, she is too busy to google things, asking to be told what time two television shows would be screening. The shows mentioned are Parks and Recreation and The Good Wife –– so at least she has good taste. 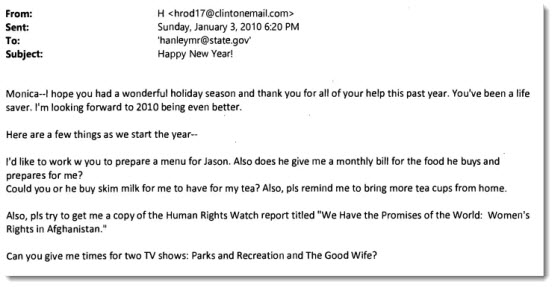 Also shown in the emails are some interesting family nicknames. Chelsea Clinton uses the psuedonym Diane Reynolds for the emails she sends to her mother, Hillary’s nickname is HRod (which sounds very high powered), and Bill Clinton is often referred to as WJC — short for William Jefferson Clinton.

Say what you like about Hilz… seems like a pretty considerate boss on the basis of that email.

Another example of what Crikey deems to be the role of a serious media entity.
Vale Journalistic standards.