‘Pervasive culture of secrecy’: how Immigration ignores abuse on Nauru

Outsourcing of accountability and poor contracts have enabled the Department of Immigration to remain ignorant of sexual and child abuse on Nauru, a senate committee has found. 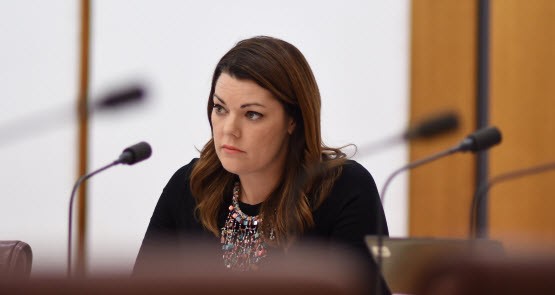 The Senate committee report into claims of child abuse, rape and sexual exploitation in Australia’s asylum seeker detention facility on Nauru, released on Monday, declined to make specific findings about individual incidents of abuse, which may account for why the report garnered relatively little media attention. The lack of specific findings are partly because, the committee says, “the volume, complexity and sensitivity of the evidence gathered during this inquiry is so great that the committee has been unable, within the time and resources at its disposal, to forensically examine all the specific claims” and partly because a Senate committee isn’t a law enforcement body. It does note, however, that facility operator Transfield has sacked six staff, removed two and suspended one for sexual and physical abuse and harassment, while security provider Wilson Security admits to 11 cases where staff have been sacked for sexual or physical abuse or exploitation of asylum seekers.

The committee concludes that “the present conditions and circumstances at the Regional Processing Centre on Nauru are not adequate, appropriate or safe for the asylum seekers detained there”. In the committee’s view, “no guarantee can be given by the department that any aspect of the RPC is run well”. The report also demonstrates, in extensive detail, are the multiple ways in the Department of Immigration washed its hands on any responsibility for this unsafe, inadequate and inappropriate facility.

The Australian government — under both sides of politics; remember, it was Labor that reopened Nauru and awarded Transfield the contract to operate the facility and provide security in 2012 — has overseen a giant open-air rape, child abuse and sexual exploitation camp on Nauru, but the department in charge of the facility has remained ostensibly ignorant of most of the dozens of reported incidents of sexual assault, and physical and mental abuse of asylum seekers in detention.

It has partly been able to do this through the legal fiction (repeatedly demolished) that what happens on Nauru is entirely a matter for the Nauru government, not the department. But the central mechanism for the department’s apparent policy of wilful ignorance is the outsourcing of the facility to private operator Transfield, which in turn has outsourced security at the facility to Wilson. The department can thus plausibly claim that it has no direct relationship with the company responsible for maintaining the safety of the facility — many of whose employees themselves were the greatest threats to security.

And the procedures involved in outsourcing reinforce this ignorance. The contract between the department and Transfield is woefully inadequate in terms of reporting requirements — and what reporting obligations there are can be evaded without penalty. As the committee notes:

“The department has been unaware of serious acts of misconduct by staff of contractors, as those contractors have not adequately fulfilled their reporting obligations.”

“A representative of the department acknowledged that ‘the current contract does not provide as strong an abatement regime as the proposed contract’, and told the committee that no financial abatements or penalties have been triggered under the current Performance Management Framework.”

So, to be clear, despite dozens of incidents of rape, sexual exploitation and child abuse on Nauru and the failure to report them to the department, Transfield still managed to meet all its contractual performance indicators.

Thus, the committee notes, “the department has effectively outsourced its accountability to Transfield Services and through them, to Wilson Security, with no penalty for non-compliance”.

Even when Wilson employees, in an extraordinary affront to Parliament and the committee itself, spied on committee member Senator Sarah Hanson-Young — actions that Immigration Minister Peter Dutton claims are “allegations which are completely unfounded”, despite the company admitting that it happened and apologising to Hanson-Young — the department managed to avoid knowing anything about it. The committee states:

“The fact that the incident was not reported to the department, and that when it came to light the department accepted at face value the contractors’ advice that it had been dealt with and did not conduct any further investigation or action, is of grave concern to the committee.”

The department takes a more active approach of non-transparency in relation to financial information. The committee said it was

“… struck by the difficulty it encountered in obtaining access to straightforward information about the costs Australian taxpayers are incurring to maintain the RPC on Nauru … For example, the department’s annual Portfolio Budget Statement (PBS) conflates spending on regional processing, providing no means to distinguish between funds spent on Manus Island and Nauru. The committee also found it very difficult to assess the full range of spending taking place in relation to asylum seeker processing in Nauru between direct RPC and settlement costs, related assistance and support to the Government of Nauru, and other Australian whole-of-government spending including development assistance.”

While this sort of financial obscurantism is par for the course for governments that want to keep embarrassing questions to a minimum, the department also had to fend off direct questioning from the committee:

“The committee wrote to Secretary of the Department of Immigration and Border Protection on 10 July 2015 to register its concern about the department’s answers to a number of questions on notice asked by the committee. In some cases, the department declined to provide substantive responses on the grounds that the matters involved ‘government deliberations’ or ‘advice to government’, without fulfilling the requirement of Senate orders that it specify the harm to the public interest that would be caused by disclosure of the information to the committee. In other cases, the department sought to avoid substantive responses by reference to matters as being the responsibility of the Government of Nauru, or subject to consultation with the Government of Nauru.”

Overall, the committee concluded, there was a “pervasive culture of secrecy which cloaks most of the department’s activities in relation to the Nauru RPC …”

And under that cloak is a litany of human misery, the result of the policies of a department that has not merely outsourced accountability, but outsourced morality and even the most basic sense of decency.

Are there aspects of international law that forbid such activities?

Electronic and physical security services, operator of security car parking facilities.This is the descriptor on their website.Substitute people for cars and you’ve got the contract on Nuaru covered with the only rider being that no doubt more care would be taken with your vehicle..

I suspect that similar accusations of abuse, cover up, and departmental lack of accountability, morality, decency and (to answer JN) breaches of international law, including the Conventions on Rights of Refugees, and Rights of the Child, could be levelled in respect of Christmas Island and Manus Island. This is on top of the revelation that we, the taxpayers, have forked out $55 million to the Cambodian government to house four (and no more) refugees.

Sustain the rage, Bernard. One question: how in the name of anyone is Dutton still in his job?

@marion.. at least the argument is made that Gitmo houses dangerous terrorists who have been captured on the field of battle.. at our Gulags we torment innocent men, women and children and apparently this is popular with the vast majority of the populace to the point where if you don’t go in boots and all your unelectable..shame on us indeed..