Rupert Murdoch has been hit with a 41% pay cut. Plus other media tidbits of the day.

Don’t cry for Rupert Murdoch. Even though the 84-year-old codger has been hit with a 41% cut to his pay packet at News Corp for the year to June, he will still be one of the most highly paid US CEOs/chairs — ditto in Australia. Thanks to a loss in the year to June and a 19% drop in the share price, Rupert Murdoch ended up “poorer” this year — at News Corp that is. But he was still paid US$5.1 million (more than A$7.2 million) for overseeing a weak year for one of the family’s two listed companies (the other is 21st Century Fox).

In the SEC filing, News revealed that Murdoch earned US$1 million in salary for the company’s 2014-15 year, and another US$4.1 million in stock awards and bonuses. In 2013-14, Murdoch earned US$8.7 million from News Corp, the home of his newspaper and publishing assets, so his pay packet last financial year was 41% lower. News Corp shares fell 19% in 2014-15, and are down another 6.5% since then to the close this morning. The shares were down 3.7% in Wall Street’s big sell-off this morning.

News Corp’s 2014-015 proxy statement for its annual meeting later in the year, released overnight, reveals that Murdoch and his CEO at News, Robert Thomson, took big pay cuts in the year to June. The filing also reveals another attempt will be made to end the company’s dual-share structure with voting and non-voting shares. The proposal nearly succeeded at the 2014 meeting. The Murdoch family control 39% of voting shares, despite only owning around 14% of all the company’s shares. Naturally, the Murdoch friendly News board is recommending that investors vote against the proposal.

Desperate times make friends of enemies. The biggest surprise in the UK newspaper industry in recent months hasn’t been the impending return of Rebekah Brooks to the helm of News UK, it has been the plunge in print ad revenues since February, with the slide seemingly accelerating through May and June.

News UK suffered a US$82 million slide in print ad revenues in the year to June, according to the company’s annual report. Analysts are watching the Daily Mail and General Trust for an expected bout of cost-cutting and perhaps job losses in coming months as ad revenues in the papers (The Daily and Sunday Mails) slowed sharply, while digital ad revenue growth slowed to a virtual crawl for the Mail Online. The Financial Times is due to start its new limited global print edition changes this month, which could end up costing casual jobs.

Given this background, most of the UK’s major publishers have united in an A$6 million-plus marketing campaign to try and encourage more advertising. The publishers of The Guardian and Observer, News UK, The Independent and Evening Standard, the Mail and Metro stable, The Daily and Sunday Telegraph and Trinity Mirror’s nationals are behind the coming campaign. The only national newspapers not involved are those belonging to Richard Desmond’s Express Newspapers. There are six ads in the campaign, which will run for eight weeks from tonight (our time) in UK papers and other media in the 18 national papers owned by the six groups. The publishers of the UK’s 33 leading magazine titles are also part of the campaign.

While fine in spirit, the reality is newspaper sales are sliding, and even though millions of people still read papers either online or the analogue copies, there are millions fewer than five years ago. And along with that slide, ad revenues are also vanishing to mobile (even from websites). The people generating the slide in advertising aren’t the ordinary everyday or occasional reader, it’s the media buyers and other analysts advising agencies and their clients, and the rise of companies running programmatic ad exchanges, which focus on online and mobile. — Glenn Dyer

Front page of the day. Sozcu columnists leave their spots blank in protest at the Turkish government’s media crackdown … 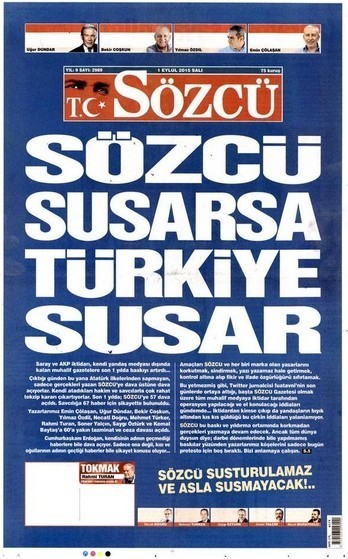