Isentia index: friendship groups, but not for reading press releases

Operation Fortitude is the least of the government's worries this week, writes Isentia's Clovelle Car

The PM said he knew nothing about the planned Operation Fortitude, which was announced, clarified, protested, parodied and cancelled on Friday in a matter of hours. Immigration Minister Peter Dutton, up three places this week into fifth spot, managed to pour fuel on the fire when he claimed Fairfax and the ABC were unfairly giving his government a hard time, after a few questions were asked as to how Border Force officials were going to choose exactly whose papers to request on the street. Nobody has taken responsibility for the media release, which the PM and Border Force  Commissioner Roman Quaedvlieg have described as “poorly worded” and has reportedly been traced to at least three different inboxes before being sent out. If nobody’s reading emails, perhaps it’s time to turn to electronic graffiti …

Treasurer Joe Hockey remains in second place this week as he agreed to front a new bipartisan political push for an Australian republic, otherwise known as a friendship group, seeking a plebiscite by 2020 followed by a referendum. Communications Minister Malcolm Turnbull, down one place this week into eighth, described the parliamentary friendship group as a biannual meeting in a MPs office with drinks (lovely!), while Foreign Minister Julie Bishop — up two places into fourth — implied Europe could solve its migrant crisis by helping to increase bomb raids in Syria, and described the China free trade agreement as “undeniably good for Australia”.

Liberal Senator Arthur Sinodinos, enters our index fifth from the bottom, after he called for a mass sacking of the “fringe whingers” found to be leaking cabinet documents, and former Victorian Premier Denis Napthine has announced his resignation and refused to endorse Liberal candidate Donna Petrovich for his former seat. 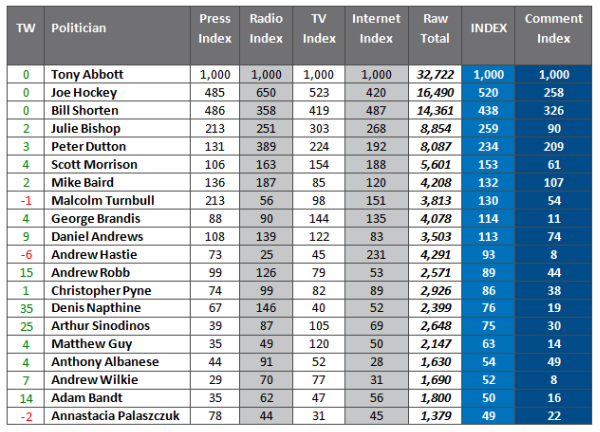 Going from Border Force to #borderfarce in less than four hours let Peter Dutton climb up the ranks on social media this week.

Operation Fortitude was announced, protested, and cancelled before talkback could even blink, while Jacqui Lambie was mentioned alongside commentary on the Australian flag and the changing political landscape, with Nick Xenophon announcing his own party for the next election.

Legendary horse trainer Bart Cummings dominated the Melbourne Cup for decades, with his last great champion So You Think finishing third in 2010.