We're not even riding the wake of the resources boom anymore; it's all but vanished. And other business tidbits of the day.

There goes the boom. The Reserve Bank’s monthly commodity price index (see below) has confirmed that the impact of the resources boom has all but vanished. In two of the three measures for the index — greenbacks and special drawing rights (SDRs are a global reserve currency created by the IMF) — the index is now at levels that pre-date not only the GFC, but the 2007-08 boom. In Australian dollar terms, it is now back to October 2009 levels, but only because of the fall in the value of the currency in the past year. Without that it would be back to 2006 levels as well. The Reserve Bank said yesterday that preliminary estimates for August indicate that the index fell by 3.1% (on a monthly average basis) in SDR terms, after falling by 3.6% in July (revised).

The largest contributors to the decline in August were the prices of iron ore and oil. The base metals and rural commodities sub-indices both declined in the month. In Australian dollar terms, the index declined by 1.0% in August. The bank says that over the past year, the index has fallen by 20.9% in SDR terms, led by declines in the prices of bulk commodities. The index has fallen by 7.4% in Australian dollar terms over the past year. It would have been much higher except for the near 20% drop in the value of the Aussie dollar. According to the RBA, the index in SDR terms hit 69.3 in August, the lowest it has been since January 200. The index in Australian dollar terms hit 79.7, the lowest since October 2009, thanks to that fall in the value of the Aussie dollar in the past year. And in the key measure of US dollars, the index hit 63.4 last month, the lowest since March 2006. Tony Abbott and Joe Hockey are ignoring the message in this graph. — Glenn Dyer 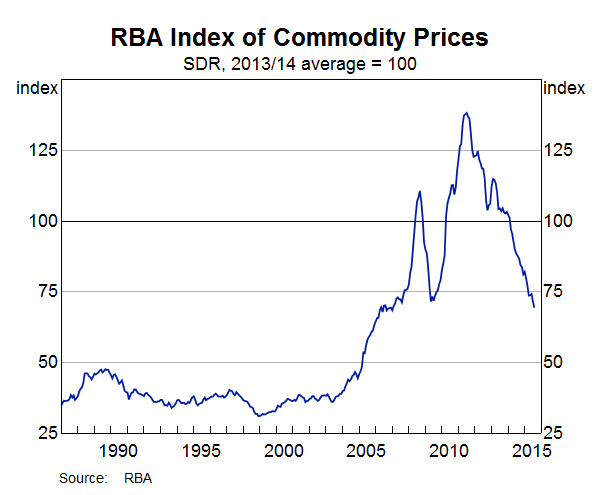 Macau’s gaming rot deepens. Another month, another 30% plunge in gaming revenues for Macau. So much for claims by the likes of James Packer and other gambling moguls (Lawrence Ho) that their casinos are good for Macau. Well, they were until China started cracking down on gambling visits to the former colony from the mainland in early 2014. Figures out yesterday showed gross gaming revenue fell 35.5% last month from August last year (when they were just starting to dip). It was faster than the 34.5% fall in July and is the seventh monthly fall in a row of 30% or more. It was also the 15th month in a row that revenues have fallen.

But unemployment hasn’t risen (it’s just under 2%) and the big casino companies, including James Packer’s 33%-owned associate Melco Crown, and the US giant, Wynn, are spending billions on new casinos and expanding others. But will gambling still be a force for growth when those new facilities are finished in the next three years? Gaming revenues have fallen by more than 30% in every month of 2015 so far. Gambling is around half the economy and about 85% of its revenues, and they are now down more than 30% from their peak in 2013. — Glenn Dyer

Oh, Canada, oh, oil shock: The Canadian economy is the biggest victim so far of the slide in global oil prices after easing into a shallow recession in the three months to June. Data out last night showed the economy contracted by 0.5% in the quarter (better than the forecast 1% slide). Statistics Canada said that on top of the contraction, the first-quarter decline in GDP was revised to a 0.8% drop from an earlier estimate of a 0.6% contraction. A rise in output in June trimmed the fall from around that 1% first estimate to half a per cent. The culprit is the fall in oil and gas prices, and a failure of the country’s manufacturing sector to follow the US economy higher in the past year, especially as the Canadian dollar has lost ground against the greenback.

The Bank of Canada reckons the recession will pass quickly and that the economy will pick up — rates were hastily cut in July. But it has already lowered its growth forecast for the year to 1.1%, down from a previous forecast of 1.9%, so there will have to be a big surge in oil prices and demand from the US (where manufacturing is slowing as well). But it’s not good news for Tony Abbott’s mate, Stephen Harper. The Conservative PM faces a tough re-election battle at the October 19 poll. — Glenn Dyer

Thanx for the snippet on Canada. I gather from the local economists that business investment has been flat for a decade and that the economy is being propped up by household borrowings. However, apparently household debt is so high it is close to dangerous, so economists are at a loss to know where the next gdp point is coming from.

“Gaming revenues have fallen by more than 30% in every month of 2015 so far. Gambling is around half the economy and about 85% of its revenues, and they are now down more than 30% from their peak in 2013”

But doesn’t the sentence discuss 3 figures? One is gaming revenues which are reported to have fallen by > 30% each month. Another is gaming revenue’s proportion of gross domestic product which is reported to be about 50%. The third is gaming’s contribution to (government?) revenue, which has reportedly fallen 30% since 2013.