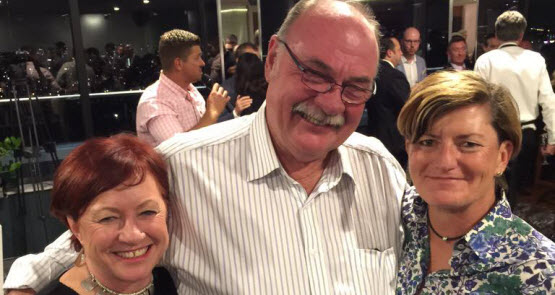 It’s not often I get to go to a party with a bunch of Hugo Boss models, a far-north Queensland crocodile hunter and Tony Abbott’s sister. Most political functions are about as stylish as an RSL, with dandruff-flecked functionaries in grey nylon. But last night’s fundraiser for Liberal MP Warren Entsch, organised by LNProud, a gay-friendly arm of the Liberal and National Parties, was full of well-dressed men. They all seemed really great, but I still wanted to ask them why they were there. Isn’t membership of LNProud a bit self-defeating, like joining Jews for Jesus? Or is it that they just like a challenge?

Whatever the reason, I have to say that it was a night that restored a bit of my faith in our political system. If a 65-year-old heterosexual, crocodile-farming, bull-catching Liberal Party politician can publicly advance the cause of marriage equality, something’s definitely working.

The first speaker of the night was Christine Forster, Abbo’s sister, who has said that she would like to marry her long-time partner, Virginia Edwards. She said “this is the last Parliament of Australia in which the members are bound to support the current definition of marriage”. The PM recently announced, after a six-hour party-room meeting, that the issue of gay marriage would be the subject of a plebiscite in the next session of Parliament, after the 2016 election.

Forster, who sits on Sydney City Council, thanked coalition MPs Kelly O’Dwyer, Josh Frydenberg, Marise Payne, Teresa Gambaro, Greg Hunt and Malcolm Turnbull for their support of the issue. Former PM Julia Gillard, freed of the shackles of the Shoppies’ Joe de Bruyn (described by Gough Whitlam as “a Dutchman who doesn’t like dykes”), is a late convert to the cause.

Forster also called on Liberals, Labor and the Greens — “all the supporters of the yes vote” — to get organised now and start campaigning. “This requires us to reach across party lines and political lines and fight for this.”

It’s now shaping up to be more of a generational issue than a party political one. On the weekend, the annual conference of the NSW Young Nationals passed motions supporting same-sex marriage, expressing “disappointment and disillusionment” with the actions of their federal leaders.

The next speaker was Lucy Turnbull, standing in for Malcolm, who had originally agreed to attend. However, late last week he gave his apologies and went off to campaign alongside Liberal candidate Andrew Hastie for the upcoming byelection in Canning, which now appears to have an Abbott-proof fence. In an understatement, the former lord mayor of Sydney said that Entsch was “not a typical advocate of marriage equality”. It was an “unexpected surprise” to discover that he was an advocate and champion of change, she said.

Warren then gave a great address, speaking from the heart. Addressing a same-sex couple with children, he said that “your children have the right to be part of a family unit and congratulations for the strong stand you have taken. Your children will always appreciate your commitment.”

His private members’ bill, which will be introduced into Parliament in the next session, has the support of two Liberal members, two Labor, two independents and one Green. Entsch said he had questioned John Howard’s proposed changes to the Marriage Act in 2004, which exclusively defined marriage as a relationship between a man and a woman. “I said to him, ‘Why are you doing this, don’t you think the people in this situation are struggling as it is?’” Entsch is now the chair of the Parliament’s LGBTI Friendship Group, which has members from all the parties.

People have been despairing at the delay of Abbott’s proposed plebiscite. As Entsch said: “If the Greeks can organise an election in two weeks, I don’t see why we can’t organise a vote. I believe that the Australian people are ready for this.”

In fact, polls have consistently shown that about three-quarters of voters support marriage equality, with resistance coming mainly from those of religious inclination. Ultra-conservative Catholic Sophie York has started up an anti-gay marriage group, the Marriage Alliance, to fight the changes. A statement on the organisation’s website says:

“Same-sex marriage will lead to more same-sex parenting. Shouldn’t children have a right to know their own biological history? Why should a child be limited in their physical, psychological, emotional and intellectual development associated with fatherless or motherless social units (as in same-sex marriage)?”

Given that decades of studies have shown that children of same-sex relationships fare just as well as children with heterosexual parents, I’m not sure what their evidence is. And I don’t think the gay community needs to be lectured by a member of the Catholic Church about child welfare, given the evidence at the Royal Commission into Institutional Responses to Child Sexual Abuse.

York has also called for a “marriage summit”, which could perhaps be held simultaneously with the “wind farm” summit, to save the flat-Earthers having to travel twice.

Anyway, Warren was fabulous, saying that “being able to marry someone who is the love of your life is the sort of issue that I want to fight for”.

“This is to protect the family,” he said, adding that legalising same-sex marriage wouldn’t also make it compulsory or contagious.

“Let’s make it happen now because it will make a lot of difference to people’s lives. Let’s keep going, I’m not going to give up on this.”

I got into the lift with a charming bloke who said he’d had a long day, including two visits to the gym. (Which is not a conversation I’ve ever had at an ALP national conference). “Nice suit,” I replied. 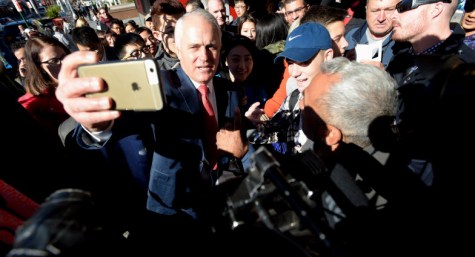 Hang on, Sophie York; are you telling me that IF marriage equality is achieved in this country that either my partner or I are suddenly going to grow ovaries, a uterus, a cervix and vagina – and all the other necessary bits a woman requires for reproduction – and suddenly be able to conceive, fertilise, gestate and birth our very own baby.

Margot repeating the Joe de B myth displays a lack of research or a willingness the to rehash other people’s slurs. JG did not believe in marriage.She didn’t support it in any form. Like many others she has changed her mind. Why not congratulate her for moving forward; not denigrate her for acting with integrity.

Because changing one’s opinion as new evidence comes to light is a weakness, not a strength.