ACMA says it's OK to call Barnaby Joyce a "wanker". And other media tidbits of the day.

It’s OK to call Barnaby Joyce a wanker. Or a gerbil. The Australian Communications and Media Authority has found the Kyle and Jackie O show did not breach its radio standards when, in May this year, Kyle abused Agriculture Minister Barnaby Joyce in rather graphic terms after the MP told actor Johnny Depp to remove his dogs from Australia (as they hadn’t gone through the mandatory period of quarantine).

During a three-minute radio segment broadcast on May 15, Kyle Sandilands told Joyce he sounded “like an absolute clown”. “You sound like an idiot. You should have reworded your statement. Sound like a classy guy. You’re a government minister, not some idiot off the street mouthing off to a news camera. Have some decency.”

Joyce responded that was interesting coming from Sandilands: “You’re the number one clown on radio.”

To which Sandilands responded: “Oh you’re a *beep*. Hang up on Barnaby. What a wanker. See ya later. What a loser.”

After the interview was terminated, Sandilands added to listeners that Joyce was “just a gerbil of a thing”.

A complainant said the segment didn’t give Joyce the respect that would “normally be afforded to a minister of the crown”, and also complained the language used by Sandilands, particularly the terms “wanker” and “gerbil”, breached the code by airing offensive language.

But the ACMA ruled that in the context, the term “wanker” was not taken to mean “someone who masturbates”, but rather, “a foolish or objectionable person” or a “self-indulgent or egotistical person”.

“The ACMA accepts the licensee’s submission that the use of the word was not sexual in nature,” the adjudication reports notes, but rather part of the Australian vernacular usage, which makes it OK.

As for the remark by Sandilands that Joyce was “just a gerbil of a thing”, the radio station argued that:

“This was a reference to a small mammal and nothing more. This did not include any depiction or description that was sexual in nature, nor any sexual connotation.”

ACMA ruled the comment “does not reach a level of offence that is in breach of the codes”.

The word “cock” was also used in the interview, but, ACMA noted, it had been bleeped out.

“In a robust interview on a subject of some political controversy, where a series of heated remarks were exchanged that escalated the tone and tenor of the language used, the phrases used by Mr Sandilands, while discourteous in terms of the conventions for political address , were not so threatening, abusive, vulgar or contemptuous that they were not suitable for broadcast,” the adjudication report states.

As for the objection that the interview treated Joyce in a demeaning or exploitative manner, ACMA ruled:

“Some of the language used by Mr Sandilands, specifically the term ‘wanker’ directed at Mr Joyce, is insulting and therefore constitutes a level of abuse. However, this level of abuse, when used within the context of a robust political discussion about strongly held views, where both participants made heated statements, does not reach the level of the test for being highly exploitative as contemplated within the relevant provision.”

Who watches (and likes) Q&A anyway? Australia’s politicians have spent hours and hours over the past few months talking about, discussing and railing about Q&A.

But what do the public think?

The figures show high viewer awareness of the program, which perhaps isn’t surprising given how it’s dominated the media cycle this year. Around 60% of the population* say they’ve tuned in to Q&A in the past.

Greens voters were unambiguously more likely to be fans, and also more likely to tune in. More than 70% of them said they tuned in sometimes, and 98% of them signalled their approval of the program. Meanwhile 64% of Liberal and National voters tuned in, and while a majority (61%) did like the program, 39% said they didn’t — by far the largest response in the negative. Overall, perceptions of the program across all demographics were largely positive, with most viewers across all age and voting brackets saying they positively rated the show. Those aged 18-34 had the most positive perceptions of the show, with 92% rating it positively, while women were also strongly in favour (85% said it was good). — Myriam Robin

Update: This brief previously said 70% where it should be 60%.

Clennell responds. Last week we contrasted NSW Education Minister Adrian Piccoli’s staunch criticism of the Daily Tele for outing Nathan Rees’ affair with the Tele‘s persistent criticism of him as a minister (including saying he should be sacked over the Gayby Baby screening last week).

“The Daily Telegraph has been accused by some of being on a mission against Piccoli because he stood up and bagged the paper in parliament for reporting on the Nathan Rees scandal in late 2013.

“In fact, Piccoli has been criticised by this paper for the entire four and a half years he has been in the job — including when I rated his performance four out of 10 in 2011.”

So there you have it. They are out to get Piccoli, but not because he bagged them in Parliament. Got it. — Myriam Robin

Can Seven comeback? September 13 and 14 are vital dates for the struggling Seven Network. That’s its last chance to stop the rot in its ratings for 2015. On Sunday September 13, the network returns the 2015 season of The X Factor to the screen, and follows that with the first episode of its mini-series on the life of Peter Allen (it’s a two-parter, as the INXS series was). The Allen series was due to go to air next February to kick off the network’s 2016 ratings battle. That’s how concerned Seven is about the loss of its 2015 ratings share and momentum since House Rules was ambushed by Nine’s Reno Rumble and Seven’s Restaurant Revolution flopped (and Nine revised the flagging Voice).

Then on Monday, September 14, Seven makes another attempt to revive its 5-6pm performance, and with that the 6-7pm news. It has bought the local rights to the ITV format The Chase (one of the Chasers on the program looks suspiciously like a comedian from The Big Gig 20 years ago). If these programs don’t stop the rot, then heads will have to roll. Don’t know about The X Factor (which flopped badly in 2014) or The Chase (it replaces Million Dollar Minute, a Seven format, and repeats of Deal or No Deal), but from what I have seen and been told, the Peter Allen series is a cracker.

Seven and Nine are also thinking seriously about a late night talk show — I think they all want to clone Jon Stewart or John Oliver or Bill Maher. Good luck, they are one offs and extra special, and very American. Shaun Micallef and his team at Mad As Hell are the closest to those US programs. Then there are the traditional tonight-style programs that David Letterman dominated until he retired this year. That has been tried. Graham Kennedy did the comedy/comment style program on Nine in the ’80s with Coast to Coast (with Ken Sutcliffe as his sidekick). Kennedy, of course, set the standard with In Melbourne Tonight. Hard to match that. — Glenn Dyer

Video of the day. Peter Dutton told Radio National and Sky this morning that Fairfax and the ABC are trying to bring down the government.

“The reality is that there is a bit of a jihad being conducted by Fairfax at the moment,” he said.

“They aren’t supposed to be political players, they’re supposed to be objective reporters of the news and I think many of them have morphed into frustrated politicians themselves … They’re being helped by the ABC as well, there’s no question about that, some elements of the ABC.” 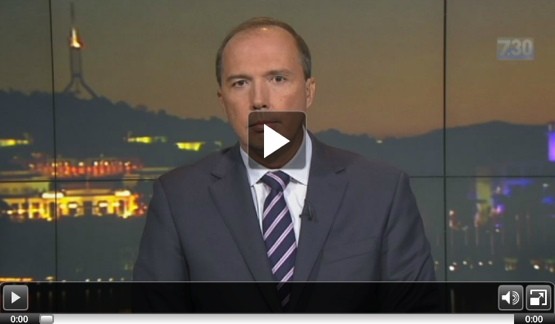 Front page of the day. Courier-Mail tries out booger points … 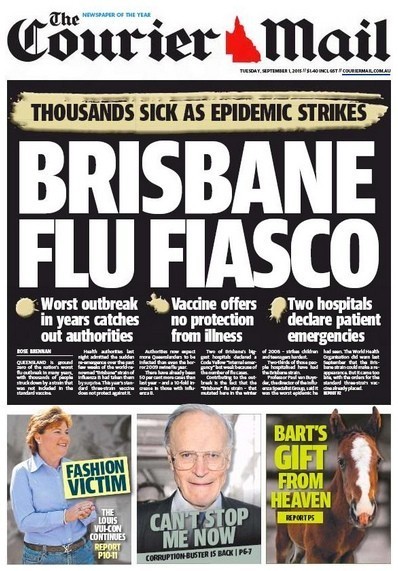 Media Briefs: It’s OK to call Barnaby Joyce a wanker. Or a gerbil.

Re Dutton’s comments on Fairfax & the ABC conducting ‘a bit of a jihad’ on the government – he should treat it as a training exercise.

Any perceived bias from those quarters is merely a warm-up for when Murdoch opts to get offside with Abbott & Co & applies the blow torch.

re the wanker. That’s a bit like my old nan saying, Oral Sex!! what’s wrong with talking about sex

D’oh nuts. Homer Dutton – the crusty clown that dragged Emerson’s affair with Gillard into a debate on Lateline when he was under pressure?
The bloke’s a flat-foot buffoon – a loyal one, who looks kept on, to make everyone else look competent?

We are often abjured not to judge but looks but, …FFS!