Is the City of Melbourne carrying out its own Operation Fortitude? ... an odd solution to tracking visitors ... maybe can bomb away a refugee crisis? ...

Papers, please? Late on Friday, as the protesters who thwarted the Australian Border Force’s Operation Fortitude dispersed around the city, photos appeared on social media of City of Melbourne officers fining pedestrians for littering, and they were heard to be asking people “how long have you been in the country?”. While the City of Melbourne isn’t among the agencies promoted as part of the ABF’s failed operation with Victoria Police, Yarra Trams and Metro Trains, locals were on high alert after the Australian Border Force press release stating “ABF officers will be positioned at various locations around the CBD speaking with any individual we cross paths with”. 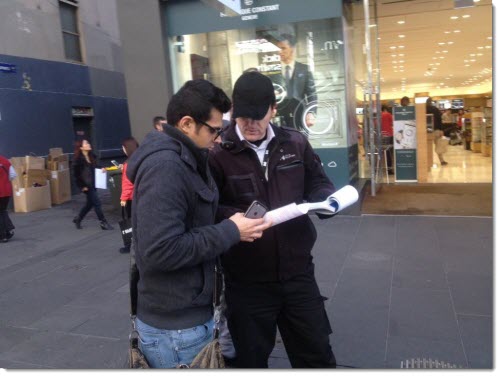 We asked the City of Melbourne about the pictures and were told that it was a standard question for officers to ask people how long they had been in Australia to make sure they were aware of local laws. We also asked if the council had been made aware of Operation Fortitude, and were told that the council found out from the same press release that started all the controversy.

Barcode everyone. Speaking of governments’ new moves to track visa overstayers, US Republican presidential candidate Chris Christie has promised voters that if he were in the White House he would track foreign visitors in the same way courier company FedEx tracks its packages:

“At any moment, FedEx can tell you where that package is. It’s on the truck. It’s at the station. It’s on the airplane.

“Yet we let people come to this country with visas, and the minute they come in, we lose track of them.”

“We need to have a system that tracks you from the moment you come in.”

Christie is not one of the main players in the Republican race, and didn’t give any further detail on how visitors could be tracked like the packages, which use a barcode system. Somehow we don’t think tourists and immigrants will take well to being fitted with barcodes, so it doesn’t look like this one will fly.

Holiday in Cambodia. It hasn’t been a great weekend for the Immigration Department, with Cambodian Interior Ministry spokesman Khieu Sopheak telling the Cambodia Daily that the country didn’t have any plans to continue accepting refugees from Nauru. Just four refugees have been settled in Cambodia since a deal signed almost a year ago, at a cost of $55 million to the Australian government. It’s an expensive price tag for four refugees, even when measured by the price Australia pays to keep asylum seekers in detention centres offshore. It’s unsurprising that the high price has yielded little in results — as we reported in June, a Cambodian government representative told a panel that he had no idea what the money was being spent on.

Bombs away. While the editorials at the in-house journal of prostate clinics across the country, The Australian, are frequently indistinguishable from the froth-mouth ranting of some mad old guy on the bus, today’s Warning Of The Tsar deserves special mention. Ostensibly about how it is time for the world to act on the Syrian refugee crisis, the editorial instead devotes itself to attacking the United Nations for condemning the Iraq War in 2003 and being too anti-Israel.

What’s this got to do with Syrian refugees? Well, good question. And more to the point, what exactly does the Oz propose as a solution re: Syrian refugees? “A solution, however, will demand resolute action by the UN, the EU and the US to deal with the problem at its source.” OK, yup, sure, but what is the solution? Well, the only possible hint is earlier in the rant. “Australia is doing its part, with the RAAF involved in the coalition campaign against Islamic State in Iraq and the government considering a US request to extend the airstrikes to Syria.” Yes, you read that right — Australia (which has significantly reduced the number of refugees it takes in under its humanitarian visa program) is “doing its part” to address the Syrian refugee problem by blowing shit up in Iraq and, the Oz hopes, Syria. For the deluded old white men of News Corp, not merely can be bomb our way to victory in Syria, but we can bomb the refugee problem away. Still, at least they’re not calling Syrian refugees an “invasion” like their colleague, Andrew Bolt.

The kids are all right, again. While NSW Education Minister Adrian Piccoli banned Burwood Girls High from showing the film Gayby Baby during school hours last Friday after a tantrum from the the Daily Tele, it looks like the students at the school might have the last word. The Facebook Page “Students of Burwood Girls” has announced that the film will be shown at the school this afternoon at 3.30 after classes finish for the day.

Clutch your pearls! On Friday Crikey reported on the recent changes at University of New South Wales student magazine Tharunka, including the publication’s history of scandal. Journalist Allan Hogan tells us that the magazine has a long history of pushing boundaries, with this cover from 1969, featuring a photo taken at the University Ball:

“Richard Carleton and I preceded Wendy Bacon as editors of Tharunka and followed Richard Neville. This was the photo that graced the front page of our first edition — something that the then UNSW Vice Chancellor Sir Philip Baxter deemed so offensive as to require our presence in his office for a bollocking and a threat that if anything like it was to happen again we would be expelled.

Needless to say, he adds, Bacon pushed things rather a way further — she spent a week in jail after publishing a raunchy (and then illegal) poem on women’s sexual subjugation.

Got your own student media war stories? Do get in touch. 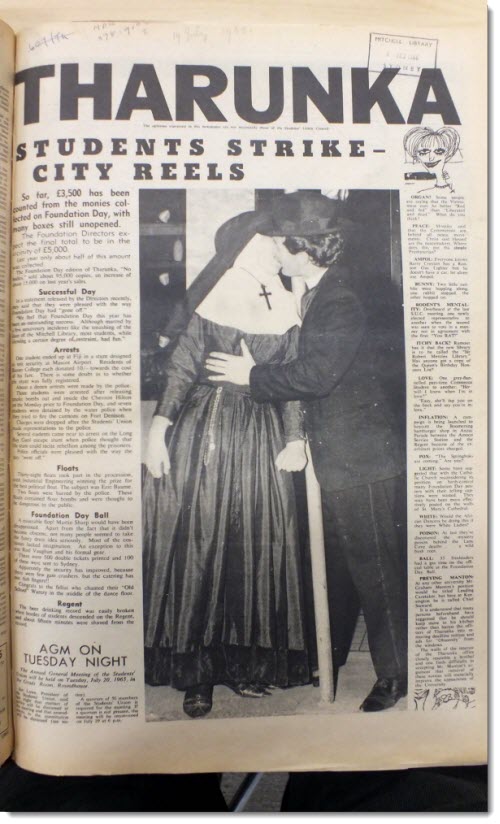 Our new refugee ‘dumping ground’: what Cambodia thinks of the request

The lies our government is telling refugees about Cambodia

For Christie – wouldn’t that be a bridge too far?

Re stories about Tarunka, in 1971 I agreed to appear naked on the front cover of Lot’s Wife to counter the increasing appearance of female nudes in the papers. Not surprisingly, the printer only agreed to allow it if my ‘bits’ were shaded out.
PDF is here –
http://arrow.monash.edu.au/vital/access/services/Download/monash:7909/DOC

Maybe Christie assumes that, because he can be seen from space, other people are equally easily trackable.