The rise of cleaner energy sources adds a structural element to the ongoing downturn in demand for coal. 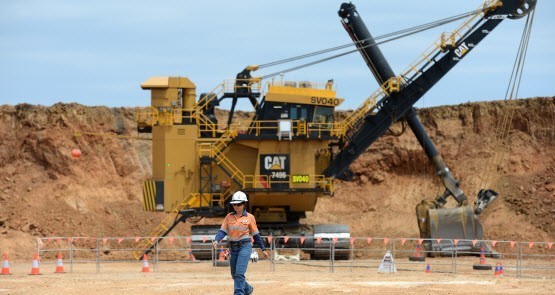 They say that bad news comes in threes, and nowhere is that better illustrated than in Australia’s struggling coal sector.

It has been hit squarely from three sides: the global commodities bust that has caused prices to collapse; environmental issues that cover the rapid rise of clean energy, carbon emissions schemes and more locally based issues; and the fact that the biggest markets for coal, China and India, have their own vast supplies in-country and, in China’s case, neighbouring Mongolia.

While the focus is on the ongoing downturn in China and the concomitant global commodities rout, in Australia it has been on its biggest export, iron ore — and no one has yet come up with decent alternative for steel.

Coal faces a far grimmer future, and that’s already playing out in Australia. Production at major mines, including those run by major global coal players, have been put on ice, and the planned sales of distressed assets is escalating. Jobs have been cut, and major new projects — headlined by the $16 billion Galilee Basin Carmichael venture from India’s Adani — are on the ropes.

First up, it’s important to note that there two types of coal: thermal coal, which is used for heating and power generation; and metallurgical (or coking) coal, which is used in steel-making and has been Australia’s second-most valuable export and along with iron ore, gold and aluminium is one of the four pillars of the Australian mining sector.

While metallurgical coal does not generate the same climate change concerns of thermal coal, its fortunes are more closely linked with iron ore, and the portents there are worrying, at best: China is close to maximum steel production at current levels of only about 780 million tonnes a year, according to Chinese government forecasts. This number falls well short of the 1 billion tonne-plus estimates of major Australian miners Rio Tinto, BHP Billiton and Fortescue Metals Group.

But its thermal coal where the pain is most acute and the sector is now in throes major restructuring based on the forecast long-term downturn in the market for seaborne or imported coal by major coal consumers.

“Almost every major coal mine owner in Australia is trying to sell coal assets, and most have excessive financial leverage and are incurring repeated net losses in recent times,” director of energy finance studies at the Institute of Energy Economics and Financial Analysis (IEEFA) Tim Buckley said in recent report.

The group is hardly alone in questioning whether any company — and the big players are all global — has pockets deep enough to fund multibillion-dollar greenfield coal projects.

“The Australian thermal coal sector is a buyer’s market with no buyers,” said Buckley.

China’s coal imports were down 34% year-on-year to July 2015. Perhaps of even more concern, the great white hope of the Australian coal market, India, is suddenly giving every appearance of being a chimera , at least for now. After six years of 20-30% annual growth in coal imports into India, they were flat in the June 2015 quarter and then declined 11%, year-on-year, in July 2015.

The signs in the world’s other major markets are consistent with this: US coal demand is down 10% in 2015 alone, and down 30% since coal demand peaked in 2008.

But it’s the rise and rise of cleaner energy sources that adds a structural element to the ongoing cyclical downturn. In recent weeks, Japan restarted its first nuclear reactor after the country’s nuclear power plants were all closed down as the government instituted strict new safety protocols following the Fukushima disaster triggered by the March 2011 earthquake and tsunami. China quietly restarted its own nuclear program earlier this year — close to 100 new nuclear reactors are either being built or are on the drawing board across Asia, the world’s fastest-growing energy market.

“When Australian coal exporters point to Japan as our largest coal export market, it is worth considering the combined impact of the August 2015 nuclear restart, the US$30 to US$40 billion annual investment Japan is making in solar and the five years of declining demand in Japanese electricity consumption,”  Buckley said. “With falling demand and rising alternative sources of supply, Japanese thermal coal demand is likewise set to decline.”

But the resources pain is hardly restricted coal and iron ore: every commodity Australia sells has been pummelled by China’s reeling economy and sharemarkets. Following the Chinese market’s “Black Monday” on August 23, its commodity index of 22 raw materials has plummeted to its lowest level in 16 years. The US NASDAQ index suspended futures trading after its futures index dropped more than 5% in one day.

The one bright spot, given the surging activity in the nuclear sector, is uranium — a resource for which Australia is still the third biggest miner (behind Kazakhstan and Canada), despite an ebb in production in recent years. But the radioactive mineral has its own unique set of problems that means being able to successfully exploit it is by no means certain.

Some upbeat analysts believe that China’s market for commodities is finding a bottom (in light of the carnage of the past 12 months, buy that story at your own risk). But for coal, particularly thermal, even a levelling out in China will not be enough.

So why is the Chinese mine in the Liverpool plains still going ahead? Or is it?

Small point – one does not mine aluminium but bauxite .
Oz exports 70m+ tonnes of bauxite worth about $250M but 16M tonnes of alumina for $70M and about 2M tonnes of aluminium for $5B which seems cheap given that they are basically bottled electricity.