Melbourne was ablaze with fury on Friday afternoon, but sniffy Sydney barely noticed. Plus other media tidbits of the day.

Sydney-centrism. On Friday, Melbourne’s CBD was brought to a standstill as protesters disrupted a planned Australian Border Force briefing to explain that press release.

While the story was prominently covered in the Melbourne papers, we were amused by how (little) prominence some of the Sydney media gave it. The Weekend Australian covered the story briefly on page 5. And here’s the Tele’s entire take on the story — down the lower-left-hand side of page 9 … 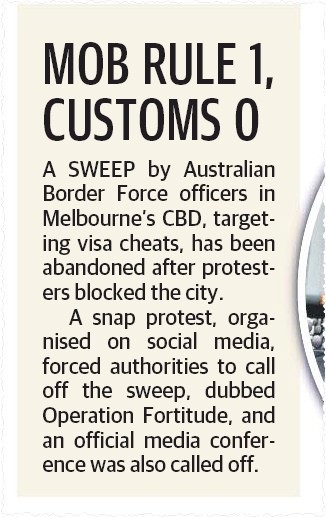 But maybe it’s a News Corp thing — the Sydney Morning Herald did put the story on its front page.

Brooks back at News UK. Back in April, Crikey reported on stories emerging in London media circles that Rebekah Brooks was on the way to returning to the bosom of the Murdoch clan’s warm embrace at News UK. There were continuing stories about how Brooks, who was acquitted on phone-hacking related changes, was talking to the Murdochs about a possible role at the company, where she started as a secretary and rose to become head the UK arm of News, only to leave when the phone-hacking scandal erupted in July 2011. On Saturday, the Financial Times and The Times reported her return to the Murdochs, a year after she was acquitted after an eight-month trial.

But her brush with the law may not have ended as there are now reports that News UK could face charges over the phone-hacking at the News of the World and the illegal payments to public officials at The Sun — Brooks would be a major witness in any case brought against news UK.  And in a more a significant development, the hard paywall adopted across the News UK and Australia (but not at The Wall Street Journal), forced on News UK by Rupert Murdoch, has been relaxed at The Sun (from June) by the about-to-depart editor David Dinsmore.

The hard paywall had caused The Sun’s online presence to collapse to almost non-existent. The first figures for the paper’s online audience since the ending of the total paywall at the end of June revealed The Sun to be trailing all its major competitors and peers in the UK national daily market. Part of the relaxing of the paywall involves making some content free and useable on social media, especially Facebook and Twitter. Brooks will have to continue that because Facebook in particular is grabbing a greater share of ad revenues (especially mobile) and is now bigger danger to News and other publishers than Google. — Glenn Dyer

Video of the day. Kevin Rudd guest-hosted CNN’s Amanpour over the weekend. But he wasn’t all serious journalism — here he tries his hand at a run of sports jokes. The question is, how many landed? 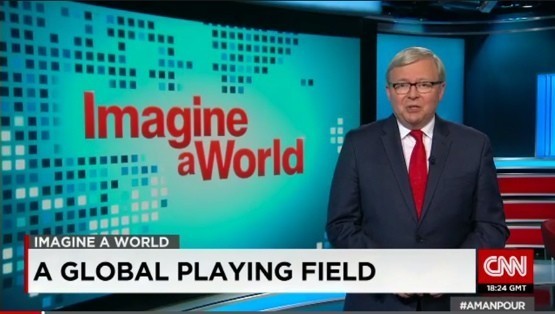 Front page of the day. Crikey alumna (now New York Post journo) Amber Jamieson spends a day in the headdresses of the embattled topless performers at Times Square, and comes out firmly on their side. We’re not sure she’ll ever top this front-page splash … 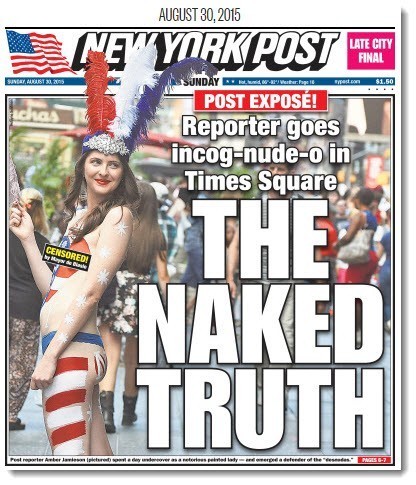 A role for Brooks? Has Rupert got a paper called “The Hay”?

The best follow up story on Border Farce is on the Age website today – clearly an SMH story parading as Melbourne news, it asks the question ‘has this sort of operation happened in Sydney’ – as if the rest of the country doesn’t matter.

Amber went from crikey to mudorc’s NY Post, under the fearsome Col Allen? What did you do to her?