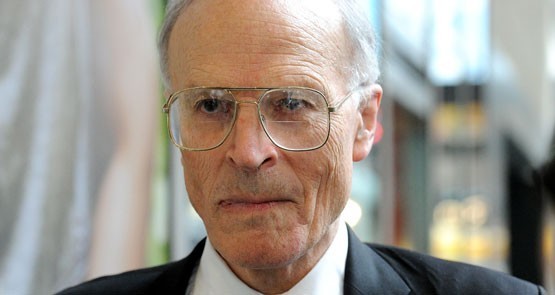 Dyson Heydon has decided against recusing himself from the Royal Commission into Trade Union Governance and Corruption, deciding that a speech he was due to give at a Liberal Party fundraiser would not lead some to believe he was biased against the Labor Party.

In a brief ruling handed down at 2pm on Monday, Heydon dismissed applications from the ACTU, the CFMEU and the AWU for the commissioner to disqualify himself on the grounds of apprehended bias for agreeing to speak at the Sir Garfield Barwick address.

Heydon rejected the argument because the event was a “legal address in memory of Australia’s longest-serving High Court chief justice.

“It could not rationally be concluded that a person who merely agrees to give a legal address at such an event, albeit organised by the lawyer branches of the Liberal Party, believes in, supports, or has any relevant associated with the Liberal Party,” Heydon said.

Despite rejecting asserting of apprehended bias, Heydon said he decided to pull out of the fundraiser “for sensible reasons of risk management and self-preservation wishes to avoid the attacks of the suspicious and the malicious”.

“It is notorious among the legal profession that I am incapable of sending and receiving emails. The consequence is that I read emails only after they have been printed out for me.”

Heydon said that the unions had failed to prove that a fair-minded lay observer would conclude that Heydon, “a highly experienced lawyer and former judge”, could not put out of his mind “any extraneous or irrelevant matters and deal with the issues” before the commission impartially.

“If it was enough to disqualify a person from a role before the fair-minded observer might conclude that the person held political views, there would be no one who could occupy the role,” Heydon said.

“Further, whether those political views are publicly stated or known or not cannot make a difference. Otherwise, those who hide their political views and may be more likely to be biased would be allowed to sit, but those who were open and honest would be disqualified.”

He also dismissed claims from the unions that the commission was politically charged. He said former prime minister Julia Gillard and Opposition Leader Bill Shorten had been called before the commission for issues related to their work in the trade union movement, not as Labor politicians. He said being members of a union also did not mean being associated with the Australian Labor Party.

Heydon also decided that by agreeing to speak at the event, which was due to be held last week, he was not helping to raise funds for the Liberal Party.

The commissioner admitted in his reasons he did not own a computer and did not use email, which could account for why he might have “overlooked” the Liberal Party logo on the invitation.

“It should be noted that there is evidence that I have no computer and that all email correspondence is sent and received by my personal assistant,” he said.

“Indeed, it is notorious among the legal profession that I am incapable of sending and receiving emails. The consequence is that I read emails only after they have been printed out for me.”

The commission will continue under Heydon, but Labor and the unions have already indicated they will not accept the authority of the commission under this commissioner.

The “sensible reasons of risk management and self-preservation … to avoid the attacks of the suspicious and the malicious” do not extend to recusing himself, then. What a trooper.

His logic also seems to suggest that *only* those with expressed political views should be considered for these lucrative roles, given that those with no expressed views may simply be hiding them and so, “may be more likely to be biased”.

Apparently a man who, by his own admission, cannot read or send emails is competent enough to lead a Royal Commission which routinely grills people about minute details from years or decades ago.

He must be taking the piss.

Wow. He’s proud to be a troglodyte. What world is he living in?

Is “I didn’t read the attachments” a t-shirt yet? And will any witnesses at the RC be offering it as testimony?

“Indeed, it is notorious among the legal profession that I am incapable of sending and receiving emails. The consequence is that I read emails only after they have been printed out for me.”

If this was so well known then possibly the invitation was sent by snail mail.

His assistant is also incompetent by not printing the attachments