The debacle of Operation Fortitude is the bureaucratic consequence of the Abbott government's deliberate trampling of basic rights. 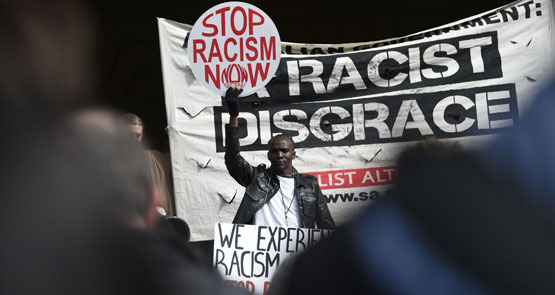 In all the confusion created by senior government figures running as fast as they can from last Friday’s Operation Fortitude fiasco, two things remain clear.

First, a Victorian police operation to address crime in Melbourne was derailed by the inept actions of a federal agency.

Second, Roman Quaedvlieg, the bemedalled bumbler who heads the Australian Border Force, either lied or was speaking from a remarkable position of ignorance when he claimed the document at the centre of the whole debacle — a particularly cack-handed (or particularly honest, take your pick) media release from ABF — had not gone to the office of Immigration Minister Peter Dutton. It turns out it went to his office not once but twice, where it allegedly sat unread. Tony Abbott says his office knew nothing at all about it.

Quaedvlieg’s claim was always absurd: anyone who has spent five minutes in the public service knows that, long before the arrival of a government as anally retentive about spin and control as this one is, no media release would ever see the light of day without being sent to the minister’s office. And this is a government where the Prime Minister’s Office dictates what TV programs even senior ministers can and can’t appear on. Yet we’re expected to believe neither the PMO nor Dutton knew about a major ABF “announceable” (in fairness, Peter Dutton doesn’t appear to know much, making the narrative fairly plausible).

Quaedvlieg has not, to this point explained, how he managed to get it wrong (and, incidentally, embarrass his minister); nor has Dutton explained why the media release sat in his office for days and was ignored.

But let’s take Abbott and Dutton at their word and accept, for the moment, that politicians had nothing to do with a media release  issued by “low-level” officials (this is the first time I’ve heard two Senior Executive Service officers — the now famous-for-all-the-wrong-reasons Don Smith and the head of the Immigration media area — called “low-level”, but it’s all a matter of perspective I guess). Regardless, it is Abbott’s debacle. He owns it.

This is true not in the anodyne sense that Abbott once insisted, as part of providing “adult government”, that the “buck would always stop with me”, that he would take “full personal responsibility for every mistake that the Coalition makes”. That’s mere political cant, and can be disregarded. Rather, it’s true because Abbott has deliberately fostered a political culture in which national security has trampled all over some of our most basic freedoms.

Under Abbott, already-draconian national security laws have been extended, in two cases in ways directly contradictory to the recommendations of the Independent National Security Legislation Monitor. A mass-surveillance scheme has been (clumsily) imposed. An internet-censorhsip scheme has been established. Parliament has contemplated segregation for people based on clothing. The Muslim community has been attacked by the Prime Minister himself for failing to promote peace; a backbench MP and favourite of the Prime Minister has attended Islamophobic rallies without criticism.

And Abbott, with no other political cards to play, has pushed national security politics to the point of parody with an ever-expanding line of (Chinese-manufactured) flags at media conferences, a reflexive invocation of “the Daesh death cult” at any opportunity, an attempt to take over state law-enforcement issues like drug enforcement, a request for a list of weekly national security “announceables” and a brazen begging of the United States to be allowed to play a greater (not in the sense of military effectiveness, but in the sense of politics) role in attacking Islamic State.

As part of this endless national security chest-thumping, the Prime Minister established ABF as his very own new security agency, transforming Customs and Immigration into a gun-toting, uniformed paramilitary outfit with a suite of draconian powers, including laws for jailing people who reveal rape, child abuse or other crimes committed against asylum seekers. A proposal from Abbott to hand powers to compulsorily collect biometric data to ABF was only defeated after a sharp-eyed Labor MP spotted it in security legislation last year.

Don’t think this doesn’t have an effect on bureaucrats. In their implementation of policy, bureaucrats very much take their cue from the government of the day. As the Cornelia Rau and Vivian Solon cases demonstrated, Immigration is an agency that is prone to this more than most. The Howard government’s demonisation of asylum seekers and ever-stricter approach to the handling of “non-citizens” created the environment in which Australian citizens or permanent residents were deported or detained by the department. It’s unsurprising, then, that ABF bureaucrats expressed themselves in a manner that was truculent and contemptuous of civil liberties. After all, that’s the tone of the government they serve.

And it was that tone that provoked a rapid and immediate backlash, one so severe that first ABF had to rush out a “clarification” that was more accurately a contradiction of its first media release, then Victorian police had to cancel the operation amid chaotic scenes at the location of the proposed media conference.

Aggressive media releases, ministerial offices that ignore emails, an agency head who can’t get his facts straight, clarifications that are anything but, politicians running a mile from the embarrassment while furiously downplaying it, and a cancelled state police operation: it was an absurd mix of rank incompetence and an aggressive disregard for basic rights in the name of political opportunism.

Tony Abbott doesn’t just own this debacle. It is Tony Abbott, and his government.

I like the black-shirts – it suits them.
Pity they couldn’t get brown?

Bernard, you excelled yourself today. I”m still wiping the tears from my eyes. Thanks for making me laugh at this government instead of shake with rage. Mockery is always the most cutting.

Its not so much that we await the next policy announcement now from this government, rather the next stuff-up.

Exactly right – I’ve worked in a Minister’s office, and there is no way that this didn’t get cleared by at least a senior adviser.

As soon as I heard that Queadvlieg presser, I thought “How long til it gets leaked that this did in fact go to the Minister’s office”?