The Croakey project initially began as an intervention into public debate with the aim of encouraging a wider, deeper discussion about health. It will continue that legacy. 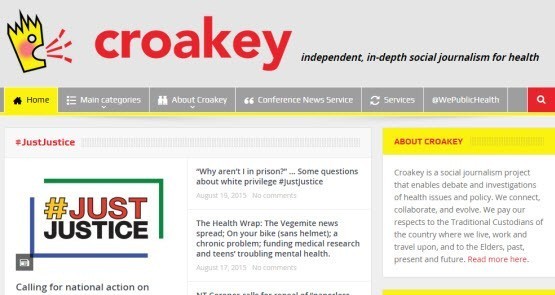 After several years of being hosted by Crikey (thanks, Crikey!), the public health news service Croakey has launched as a standalone platform.

We are calling ourselves “social journalism for health” because when I read an explanation of this emerging field of journalism last year, it rang an immediate bell: that’s what we do at Croakey.

In the article, US journalism academic, innovator and author Professor Jeff Jarvis argues that social journalism broadens the role of journalists from being reporters, and content creators and producers. He wrote:

“… it can also mean connecting the members of the community to each other to share information themselves. It can mean sharing data and tools rather than developing narratives. It can mean helping a community to organize itself to take action (yes, that’s community organizing). It can be education. It must be collaborative. Social journalists will judge their success instead by whether the public they serve and its members accomplish their goals, meet their needs, improve their lots and their communities  —  and whether they connect with each other to better understand each other through discussion and information.”

The Croakey project initially began as an intervention into public debate with the aim of encouraging a wider, deeper discussion about health — as outlined in this 2009 article in The Medical Journal of Australia, describing it as “a novel collaboration between public health and the media”.

Since then, we have continued to evolve and adapt, in response both to the digital dynamic and our funding constraints. Readers have become collaborators, working with us on projects like @WePublicHealth, #IHMayDay, The Health Wrap, the Gavin Mooney Memorial Essay Competition, and the Naked Doctor column, as well as crowd-funded initiatives like The Koori Woman columns, #WonkyHealth, #JustJustice, and #CripCroakey.

We have needed the flexibility of our own platform for some time; winning a $5000 journalism innovation grant from the Walkley Foundation earlier this year was a game-changer.

What hasn’t changed, however, is our approach to covering health. We do not approach health reporting through a narrow clinical or disciplinary lens, but take a holistic view that recognises the health of individuals is connected to the health of communities, societies and the planet.

Our work is underpinned by an appreciation of the importance of equitable access to health-producing environments as well as to healthcare, particularly primary healthcare. We look for health in all policies, not only from the health sector or health portfolios.

Croakey is not an organisation in the conventional sense. We are a lean outfit with a small budget and no full-time staff, and are probably best described as “a connective” of people who work together on different projects.

We will also continue to be transparent in declaring our funding arrangements, including a consortium organised by the Public Health Association of Australia (PHAA) and the Croakey Conference News Service. We also plan to launch a range of services that align with our core mission in order to help fund the platform.

With core funding of $24,000 per annum, we rely on our engaged and contributing networks.  This week Summer May Finlay, a Yorta Yorta woman, public health practitioner and a member of the #JustJustice team, will be presenting on this project, which is investigating ways to stop the over-incarceration of Aboriginal and Torres Strait Islander people, to the Mayo Clinic’s first international Healthcare and Social Media Summit.

As well, Melissa Cadzow is live-tweeting the conference, which starts tomorrow in Brisbane, for @WePublicHealth from a health consumers’ perspective. Follow #MayoInOz for news from the conference. And you might also like to follow the new account @CroakeyNews — which was launched today by this week’s Croakey editor, Marie McInerney.

While Croakey has operated with financial and editorial independence from Crikey since 2009, we are grateful for the support and collaboration of the Crikey team since 2007.

*Melissa Sweet is an independent journalist, the founder of Croakey, and a PhD candidate at the University of Canberra.

Congrats on the move! How may I subscribe for email updates?