With the grown-ups in charge, are student rags going soft?

UNSW's Tharunka is no longer going to have an elected student editor. Is this the end of it as a boundary-pushing voice for students? 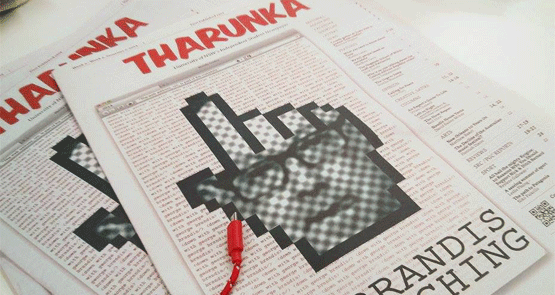 In 1970, acclaimed investigative journalist Wendy Bacon spent a week in Mulawa Women’s Prison, after appearing in court wearing a nun’s habit with the words “I have been fucked by God’s steel prick” sewn into it.

She was in court in the first place because, while editing University of New South Wales student paper Tharunka, she published a poem on the sexual repression of women, particularly Catholic nuns. Here’s an extract:

“But soon you will realise,

That you have been getting fucked all along.

For there is no cock as big and rough

As the one your church has thrust into you.

The subsequent scandal helped reform Australia’s censorship laws and showed the role student rags could have in helping shift the public debate. But a lot has happened since the 1970s, not least at Tharunka, where big changes are planned.

In the wake of voluntary student unionism, many student publications collapsed, or underwent radical shifts in style and frequency. The ones that replaced them have, more often than not, been the creation of the new, more corporate student unions that replaced the free-wheeling ones dominant in the days of easy money provided by compulsory student unionism. Many of Australia’s oldest and most prestigious student publications, like the University of Sydney’s Honi Soit and Melbourne University’s Farrago, did survive, and are still a rowdy part of the student elections that clog up campuses around this time of year. But elected student editors are a dwindling breed — and at the University of New South Wales, there’ll be one less election this time around.

Earlier this month, UNSW’s student union board decided that Tharunka, the publication Bacon edited in 1970, would no longer have elected student editors. Instead, student editors will be appointed by a panel comprising of someone from the student representative council, the outgoing editor, another student, someone from the union’s marketing team and (possibly) someone from the university’s journalism faculty. It’s hard to see a burning desire to overturn Australia’s obscenity laws playing well to such a panel.

Earlier this year, one of Tharunka‘s editors resigned in disgrace after it emerged that he’d been deleting articles from the Tharunka archives relating to student elections without telling anyone. But Brad Hannagan, the CEO of the student union, says that didn’t really play into the decision to remove elected editors. “If anything … this new model wouldn’t necessarily negate the opportunity of that happening again,” he told Crikey. The changes seek to limit tension within editorial teams by having a managing editor chosen by the selection panel sitting over subeditors and other contributors — the dominant model in student media is to have several coeditors sharing the load, which can lead to problems if the editors disagree.

“The board has made a decision that to position a paper for the future, and ensure quality and readership, it would be better served by having those positions open to an application process, where students would apply for the role and have to demonstrate a capacity to write,” Hannagan said.

“That’s really the only significant change. There’ll be no change to independence, no change to the charter … The selection panel will be dominated by students.”

“We don’t have any fears that it’s the death of Tharunka or that the student voice will change. We just want to make sure there’s quality,” he said, adding that it’d also be good to make sure the managing editor has access to professional development opportunities.

But former and current student newspaper editors are worried.

Former Tharunka editor Osman Faruqi told us that, if anything, the scandal earlier in the year highlighted the need for “stronger protections around independent student journalism”. “The union — as the body with overall governance and resourcing responsibility — has a responsibility to protect that. But instead of responding in ways to enhance and protect the independence of Tharunka, they’ve decided to remove it altogether.”

Across town at the University of Sydney, the 10 editors of Honi Soit, the second-oldest and last remaining weekly student publication in the nation, have been keeping a close watch on events at UNSW. When Crikey approached them for comment on the situation, and on elected student editors more broadly, they issued us with a joint statement. “In all honesty we’re a little cynical about the reasons behind the change,” the statement reads, describing it as a power-grab by the union.

“We have little faith that the people who get to choose who’s appointed won’t just pick their factional mates … At best it’ll end up coddled by PR and exist as little more than a promotional leaflet for [student union] Arc, which is shame.

“Honi’s rival publication at USyd, The Bull has taken the latter route and is basically run by the student Union’s PR people — it’s no coincidence that most Bull editors end up jumping ship and editing Honi the year after their term expires.”

Speaking more broadly on the desirability of elections, the Honi Soit editors say student politics is “truly awful”, and there are “undoubtedly people who’d make good editors but don’t want a bar of it”.

“[But] the difficulty of elections goes some way to weeding out people who don’t care about the position.”

In Melbourne, current Farrago editor Martin Ditmann was similarly sceptical of the decision. “This is a very important and historic student newspaper,” he said. “If the appointment came with strings attached or if the mandate came from the union’s communications department and not from students, there’s a risk it would change the way it was framed and the legitimacy we had.”

The current editor of RMIT’s Catalyst, Finbar O’Mallon told Crikey he finds it difficult to believe Catalyst could publish independent reporting on things like the National Union of Students, and the university and student union closer to home, if he and his co-editors had been appointed. Even if students were given free rein, he said, “having a PR whiz breathing down your neck would affect anyone’s editorial [decisions] whether they know it or not”.

At the University of Adelaide, the winning On Dit editorial team scandalously ran on a ticket endorsed by the Liberal club. On Dit editor Leighton McDonald-Stuart told Crikey this morning the election has proven useful in proving a mandate for changes the team has wanted to make. Commenting on Tharunka, he said despite problems with one of the editors this year, he didn’t think appointment was the answer. “The answer will come at the next election,” he said. “Elections are the ultimate accountability measure.”

“Ultimately though, for me, this comes down to the fact that student publications are largely funded by the Student Services Amenities Fee.” The fee, the previous Labor government’s half-hearted attempt to bring back compulsory student unionism, allows universities to collect funds from students and then distribute them to student unions or decide to provide on-campus student services themselves. “It’s important for students to have a say in how their money is spent,” McDonald-Stuart said. “I think that’s one of the biggest reasons to have elections.”

Putting aside the democratic concerns of student editors, it’s clear that the range of student rags with appointed editors — like the University of Western Australia’s Pelican, the University of Tasmania’s Togatus, and now, UNSW’s Tharunka — are a more professional breed, less likely to wildly fluctuate in quality and reputation from year to year. As student unionism’s character changes, this impacts the types of publications it funds. Student publications, which have launched the careers of many of the country’s top journalists, lawyers and politicians, are now less likely to fuck up, but also less likely to take risks.

“[But] who’d want to read a student paper that didn’t take risks. It’s kind of the point of student journalism.”

Media briefs: Sydney Uni privacy row … Could you get a cadetship? … Greenslade baits …

As far back as the 1950s when I first began reading student ‘newspapers’ regularly they were poor quality pseudo-intellectual trash. The Bacon Family provided one of the first examples of Anti-ALP Marxists who cosied up to Far Right NCC elements to advance careers. The Maoist/NCC partnership between Wendy’s brother and the NCC’s Lennon in Tasmania saw them both become Premiers of that State.
Crikey could provide its readers many interesting stories if ever it wanted to do so; but I wouldn’t place money on them taking such steps, because they’re after a different sort of clientele.

10 points, minimum, for the last line.