Want economic reform? Here’s someone who could deliver it

Effective implementation of an economic reform agenda requires voter trust and a capacity to communicate effectively, Only one Liberal possesses those qualities. 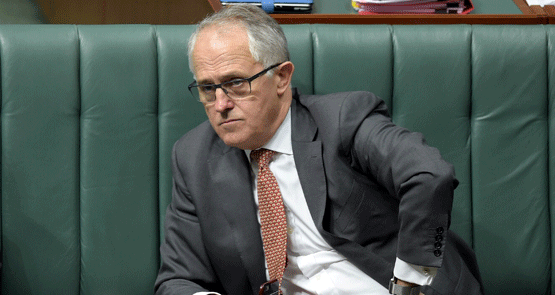 This week’s national reform summit, when it wasn’t a talkfest of political and economic elites pushing their own agendas, was strongly focused on policy, rather than the mechanisms of successful policy implementation — securing voter support, securing parliamentary support, securing key stakeholder support, defending against opposition.

But if the political class wants to significantly improve the chances of serious economic reform being implemented, the answer is less complex than they think. There is one politician in government ranks who could effectively prosecute a case for reform, one politician who could build trust with a sceptical electorate, one politician who wouldn’t fear to take on vested interests on all sides who would try to derail reform that doesn’t suit them.

The only problem is, he’s currently stuck in the relatively quiet portfolio of Communications. If you want reform, Malcolm Turnbull is the only Liberal who can deliver it, from the prime ministership.

Turnbull’s strength is his effectiveness at communication. He is not merely a powerful set-piece orator — Parliament’s best — but he talks to voters as though they are adults capable of rationally considering issues, while possessing a knack for reducing complex issues to their basics and getting them across. He also has that rare quality of unforced authenticity that only Anthony Albanese in Labor ranks has, the sense — however manufactured — that you’re getting the actual person, not a politician reciting dot points.

Turnbull also has a stronger basis on which to build voter trust than either Tony Abbott or Joe Hockey. He is considerably more popular than Abbott among the wider electorate, and is rated as one of the Coalition’s most competent ministers (despite the increasing debacle surrounding the government’s cheap’n’cheerless version of the NBN) while Hockey is rated as its worst. Popularity doesn’t equal credibility, but it’s a good start toward it, and one that Abbott has never been able to contemplate given the electorate’s long-running dislike of him.

But Turnbull’s popularity is important in another way. It is Abbott’s unpopularity that has directly helped wreck any chance of meaningful reform — the best example is how a desperate Abbott forced Hockey to abandon his work on fixing superannuation tax concessions explicitly in order to use the issue against Labor. A prime minister constantly looking over his shoulder at his own backbench and hostage to every poll is never going to be a strong reformer and won’t back ministers who are. With a stronger political position (and, perhaps, some initial goodwill from the electorate), Turnbull will have more political flexibility on reform.

With greater trust, a more open-minded electorate and a greater capacity to explain to voters a more coherent economic narrative — not to mention a capacity to monster rentseekers and special interests — Turnbull would stand a far greater chance of securing voter support for hard reforms. Where he may struggle is in negotiating with the Senate crossbenchers — Turnbull is famously intolerant not merely of fools but of people who disagree with him generally. However, he couldn’t be worse than Abbott, whose capacity to pass legislation is so poor parliament is now essentially on a go-slow due to his reluctance to bring forward legislation that may not pass.

This is also what Turnbull offers right-wing Liberals who can’t stand his moderate social views or his acceptance of the scientific reality of climate change. In terms of implementing a neoliberal economic agenda, Tony Abbott has been a failure. For every achievement such as repealing the carbon price, privatising Medibank or dumping the mining tax, there’s been a disaster to replace it: the budget deficit has doubled, the tax:GDP ratio is surging, government spending remains higher than it was under Labor, net debt has skyrocketed, industrial relations reform has been abandoned, meaningful tax reform has been abandoned. Turnbull offers the hope that a reform agenda could be implemented with greater success than the exploding-cigar act that Abbott and Hockey have offered.

No one else in Liberal ranks has anything like these qualities. For all the hyping of Scott Morrison by the press gallery and Morrison himself, he barely registers with voters as a leadership figure. Julie Bishop’s stint in the Treasury portfolio in opposition was famously a disaster, and she hasn’t had to trouble herself with domestic politics since the government was elected. Andrew Robb has that softly damning “safe pair of hands” image — he projects substance and competence and he’s prepared to make unpopular arguments (whether right, as on foreign investment, or howlingly wrong, as on the TPP), but he lacks cut-through and voter recognition.

Forget about what Turnbull might do for the Coalition’s chances of surviving beyond one term: its chances of leaving any meaningful reform legacy behind also depend on him. The basis for a strong, competent, reformist Liberal government lies with him.

Sigh… Dream on Bernard. You’re not getting a pony for Christmas and Turnbull as leader of the Libs just isn’t going to happen

I’m not sure you’re right about Turnbull’s competence, either. OK, he’s done a bang-up job of destrying the NBN as per his riding orders, but he displayed extremely poor judgement over the Godwin Grech thing. Senator Aidsan Abets outsmarted him, after all.

I wouldnt trust Turnbull after his performance with the NBN rollout. He promised the job would be done cheaper and faster under his stewardship.He lied.

You forgot to mention, as one of his strengths, his capacity to prosecute a case he does not believe in; the National Fraudband Network being a prime example. You are right to point out his inability to suffer people who do not agree with him, but your comment that “…he couldn’t be worse than Abbott” is so utterly obvious I’m not sure why you mentioned it. Whilst not disagreeing with the main thrust of your article, that Mal has the capacity to build consensus within the wider community, I think a far greater challenge for him will be to build consensus within his own party. As you rightly point out he is intolerant of fools.

So Bishop’s time as Shadow Treasurer rules her out, but Turnbull’s disastrous run as LOTO isn’t even mentioned in the article?