Ben Eltham locked out, but we still have the goss from Brandis' chinwag ... Groundhog gay ...

On-platform matters. The Australian Border Force, Australia’s newest security agency, is ostensibly all about protecting Australia’s borders — boats, customs, immigration. But now they’ve found a new way to keep our borders secure — by patrolling the streets of Melbourne this weekend. In a release this morning, the ABF said that Operation Fortitude would join Metro Trains, Yarra Trams, the Sheriff’s Office and the Taxi Services Commission to “support the best interests of Melbournians, targeting everything from anti-social behaviour to outstanding warrants”. The release says the operation will focus on people travelling to, from and around the CBD.

ABF regional commander for Victoria and Tasmania Don Smith said: “ABF officers will be positioned at various locations around the CBD speaking with any individual we cross paths with.” Good luck approaching all the Collingwood supporters who will be in the city tonight. While the release says it’s aimed at anti-social behaviour, it also quotes Smith warning visa over-stayers — “You need to be aware of the conditions of your visa; if you commit visa fraud you should know it’s only a matter of time before you’re caught out.” So now the ABF is trying to get queue jumpers and fare-evaders all at once. We asked Border Force Media what people would be targeted, what activities would take place and whose idea this whole operation was, but didn’t hear back by deadline. Either way, Melburnians need their Mykis and their papers tonight.

Brandis’ arts fiesta. On Wednesday we reported that Minister for the Arts George Brandis would be in conversation with Liberal MP Kelly O’Dwyer at an arts forum, held yesterday, but O’Dwyer herself told Crikey‘s Ben Eltham he wasn’t welcome, because having a journalist present could stifle the opinions of her constituents. But Crikey‘s excellent tipsters delivered the goods. It was quite a high-powered room, with industry stalwarts like Tom Gutteridge, Alison Richards, Daryl Buckley and Michael Gudinski putting questions to Brandis. Director of Regional Arts Victoria Esther Anatolitis also live-tweeted the meeting, and while it didn’t reveal too much, her feed did tell us about Brandis’ attitude. The Minister for Dark Arts told those assembled that the National Program for Excellence in the Arts would allow for more ministerial discretion, and that funding big companies like the Australian Ballet and Australian Chamber Orchestra would allow for those companies to tour internationally: “For Australia to be known in the cultural capitals of the world … we have to assist our flagship companies to tour.”

Brandis thinks we will all thank him eventually: “‘People who have been critical will — possibly reluctantly– eventually come to say thank goodness we had a government — and an Arts Minister — who had a vision’.”

Our tipster says those present weren’t convinced by the vision:

“Oddly enough, his audience did not appear to have been convinced — nobody stood up to congratulate the Minister on his foresight and vision. Tom Gutteridge (Polyglot Theatre), Alison Richards (Black Hole Theatre) and Daryl Buckley (Elision Ensemble) pointed out in turn that a mounting body of evidence showed that SMACs (Small to Medium Arts Cos) toured more internationally and domestically, produced more new work, had better international reputations and built domestic audiences more effectively, including in regional and remote areas, than the majors – this was already doing what the NPEA claimed as its goals so why were they being starved of funds? Michael Gudinski (Mushroom) queried the lack of support for popular contemporary music, other speakers complained about the NPEA’s restrictions on applications from individual artists. Gallerist Robert Gould made a point about the impact on the secondary art market of taxes on sales and restrictions on ownership of artworks by SMSFs. Esther Anatolidis (RAV) noted the lack of comprehensive data on sector activity as a basis for policy-making and asked how this could be remedied and what the Arts Ministry will do as a result?”

“On the question of evidence, Kelly O’Dwyer volunteered that the ABS was now part of her portfolio responsibilities as Assistant Sec Treasury and that with the extra $250m recently allocated, it may be in a position to once again collect arts and cultural data — watch this space. She independently volunteered that she thought that maintaining an Australian cultural voice was critical for national identity — and that back in the day she had been a performer in the Melbourne Fringe Festival, in a show with Angus Cerini!”

“There was very little to indicate a substantial change in Brandis’ fundamental position on cultural value and the established arts hierarchy (including the news that his next appointment was a visit to ANAM). Except for applauding the quality of Torres Strait dancers he had just seen (he came straight from the PM’s stint in Bamaga), his references were overwhelmingly to major companies as examples of the kind of arts organisations that deserved further support. He was however more conciliatory in his answers to qs about the impact on the small to medium arts sector than in previous public statements – and after today he most certainly could not continue to claim that in all the many conversations he has had with ‘his interlocutors’ he hasn’t heard any substantial criticisms of his actions in establishing the NPEA.”

While Eltham was metaphorically on the outside looking in, he told Crikey this morning: “In the age of social media the idea that locking a jounro out of the room will somehow prevent scrutiny or make people in the room feel more comfortable is pretty silly.”

Groundhog gay. On Wednesday The Daily Telegraph splashed with the headline “Gay Class Uproar”, telling us that the most disgraceful thing would be happening at Sydney’s Burwood Girls High School today, when students would have the option to watch the film Gayby Baby, directed by a former student, during school hours. Quelle horreur! Over on page 5, the Tele was also fighting the other big scourge of the week, an offensive Twitter handle that appeared on Q&A on Monday night. In the early edition of the paper, it quoted Communications Minister Malcolm Turnbull as saying that calling ABC managing director Mark Scott was a “groundhog gay moment”. They really just can’t stop worrying about the gays at the Tele, can they? 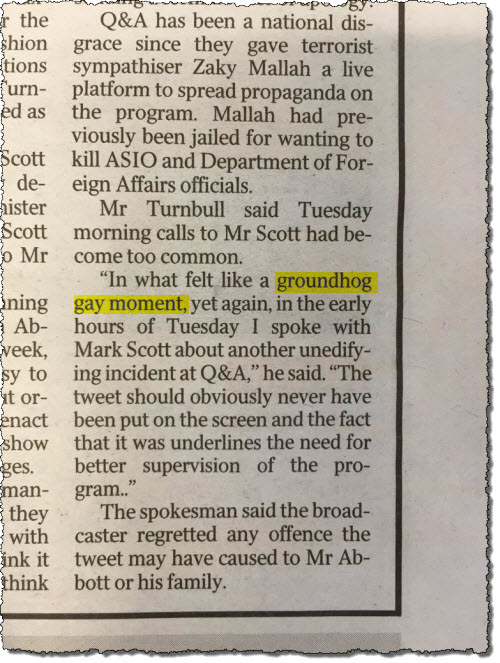 On the topic of the film Gayby Baby, Dendy  Cinemas Newtown has announced that when the film opens next weekend, students who present their student card will get discounted tickets. Usually student tickets are $16, but they will be $12 for all of opening weekend.

I sure hope I have the correct ‘papers’ for my commute home from Melbourne tonight……its been nice knowing you all….

AFAIK, police can only ask for your name and address when they have a reason, you don’t have answer any other questions and you’re not legally required to carry identification.

So what’s the ABF reason? You look a bit ethnic?

And what’s next, the ATO seeing if you’ve done your tax? Wait, they’re rolling-out facial recognition tech, so they can ambush you on the way to the ATM.

“Infinite Monkey Theorem” – how many does it take to get the Teletrash out?

I just went to the Border Force Facebook page, made a post and then called the media phone number.There was a bullet point thing there and the last bullet pint said that these operations had been carried out before with the Immigration Department. A flustered young woman couldnt tell me when this had happened in the street previously.
I then called Dutton’s office and spoke to Alex.Just like the Border Force person he asked for my name, I often ring politician’s offices and they never ask for my name.I asked Alex if this was Dutton’s idea and he told me that he didnt like my tone! I then suggested that he needed thicker skin if he wanted to be a staffer, that I didnt appreciate Gestapo tactics in the street and that he should go and get fucked!
Can this government get any worse?

This is Crikey Land, so it’s hardly surprising people can’t see the excellent obvious reasons for making use of resources in this manner is it.