Rundle: Abbott should back the Kurds and their ranks of foreign fighters

Before we talk airstrikes, Abbott needs to be held to account on the greatest hypocrisy to date: the prosecution of Australian people willing to join and fight with the Kurds. 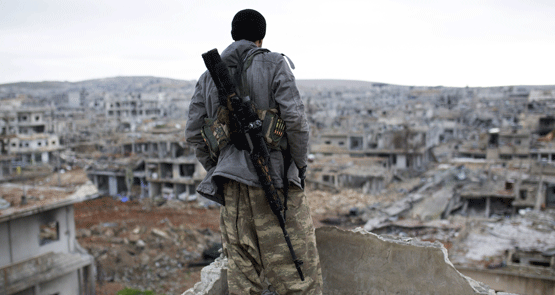 Revelations that the Australian government had engineered a US request for assistance with airstrikes in Syria aren’t. Revelations, that is. By the time Tony Abbott announced with gravitas that it was his melancholy duty to inform us, etc, etc, that six Aussie planes would be bombing targets in Syria from above the clouds and this was a serious struggle for civilisation, etc, etc, we had already been warmed up by backbencher Dan Tehan, independently calling for airstrikes there, and let slip the dogs of war, and for evil to prosper all this is required, etc, etc …

This is like the bad magic acts they used to put on between the strippers at Leagues Clubs. It’s one thing to watch the same lame routine over and over, it’s another matter entirely when they can’t even get the trick right despite multiple attempts. It was, one assumed, the last rabbit available to be pulled out of the hat — until Joe Hockey started talking about the republic.

As with same-sex marriage, one gets the impression that this government is so weak on policy and a program that their numbers actually benefit from the appearance of division and furious internal debate, because it distracts from the obvious point that they can’t do anything when united.

All the greater pity then, that they’ve lit on the conflict in Syria as another cynical political exercise — because the issues it raises, as were raised with Libya, are complex and important. Extending the war into Syria is probably illegal by international law and will kill civilians, as m’colleagues Keane and Sparrow pointed out this week.

Regarding the border as unimportant, as Tony Abbott did, is handing a victory to Islamic State. It’s genuinely frightening that the only smooth and competent action the government has performed over the last six months is to change how it refers to IS (now Daesh) — since the caliphate state IS has established in that colonially divided area draws strength from being bombed as a single entity. It gains recognition from being bombed that it does not get by any other means.

The exaggeration of IS’ power and evil — by the focus on the stagey and spectacular nature in which it has killed about 5-10% of the number of people Bashar al-Assad has murdered in the same period — has by now become an exaggeration of an exaggeration. This is another expression of Abbott’s sycophantic bombastic style. This religious terror group is now more radically evil than the Nazis or the Khmer Rouge. Those groups had state apparatuses with which to kill millions. ISIS has some swords and a laptop with Final Cut Pro (the name of a standard software editing suite, I should add) on it. The rest of their equipment is US gear looted from or sold to them by the allegedly democratic Syrian forces we were supporting.

Yet for all that, there remains a case for US airstrikes in the region — because the armed wing of the government of Syrian Kurdistan, the YPG, has officially requested them, relied on them to liberate Kobane and that region of the Turkey-Rojava border(a Syrian Kurdish area), and to help establish an independent Kurdish entity in the region. This really is the progressive alternative that requires military support, getting it now from the Turks behind them, as well as IS in front of them.

With women occupying 50% of their leadership roles, playing a huge role in their armed forces, and with processes of land reform and redistribution underway, and the creation of a set of interlocking self-governing cantons, the Kurdish movement has created an enormous progressive surge in the whole region, with the possibility of a genuine secularism and expression of human rights grounded in material change, not in abstract slogans attached to corrupt regimes.

There seems to be little question that, for the left, this is an even bigger challenge to automatic rejection of such US actions than was Libya — and that statements like “bombing always makes things worse” are untrue. That’s a de facto pacifism that sections of the left have slipped into, and when it becomes so untenable as a positive statement, a great silence descends — you’ll notice there were no protests against US airstrikes in Kobane, though that city was pounded for weeks.

But such dilemmas should be owned as part of a wider political attitude — that there are some times when not supporting such involvement would be a refusal of solidarity. The Kurds are not fooled; they know that the US could turn on them in the future, and has allowed Turkey to bomb Kurdistan Workers’ Party targets. But at the moment they are in active alliance with the US, and if you support the Kurds, you can’t simply ignore that real relationship.

That’s all the more reason why Abbott should be held to account on the greatest hypocrisy to date: the prosecution of Australian people willing to join and fight with the Kurds. If Abbott really believes that IS is a group of radical evil, then how can such brave men and women be condemned for making what we allege is the supreme sacrifice against violent religious fanaticism and moral nihilism?

Not only are such troops doing as much as airstrikes are, they are doing more than the official Australian involvement. For we all know, the Australian contingent is simply duplicating jobs that could be done by US forces, with greater coordination and purpose, being under a single armed force. The political maneouvre is actually militarily counter-productive, but is done anyway. The degree of superfluity in our presence there is unparalleled. It is Abbott’s tragedy/farce that he can’t recognise a significant moment even when it lands on him. He would rather fake seriousness where the real thing is in demand. No reason why we have to follow him down that bombing path.

IS or whatever they are called this week have a lot of killing to do before they measure up to the Khmer Rouge! Yet the West supported the Khmer Rouge for at least ten years and helped inflict even more misery on the poor Khmers by prolonging the war with the Vietnamese. And most of the millions of mines were laid in this period when we were supporting the wrong side.

The West seems to have a habit of white-washing their out-houses.

When did we pass the end of Civilisation as we know it?

A report in the SMH that Canada was already bombing Syrian targets and they they were now down to about 1 raid per week because finding targets in Syria just isn’t that easy, and will often involve substantial civilian casualties.

So the whole debate about bombing Syria is both illegal in international law, and also moot!

I totally agree Dogs breakfast. What a lousy distraction this has been from Abbott, who failed primary school homework up north. Fighting for Kurds is good. I thought we went to Iraq to stop Sadam killing them. NBN, deploying 6 bombers, Republic, Indigenous housing donation, Gay marriage, and Ruddick at one of those pathetic conventions with 15 in attendance just shines a bright light on this government and they are all heading for the shadows where their puppet masters sit.
Meanwhile the deficit and GDP are going to get smashed, China FTA is basically selling our soul and when I try to see vision from this government I see a kindergarten of kiddies finger painting.