Poll Bludger: is Abbott setting himself up for a fall in Canning?

Bill Shorten has set the bar to claim Labor victory very low for the Canning byelection. But the Prime Minister may well be grasping at straws. 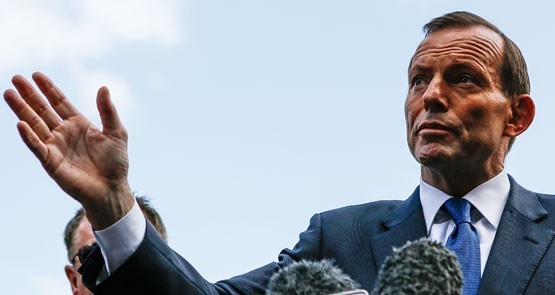 With three weeks to go until the most important byelection in recent history, both sides are preparing the groundwork to spin the result, whatever it might prove to be.

Labor’s tactics ahead of the Canning poll on September 19 are easy enough to understand. Opposition Leader Bill Shorten reportedly put it to caucus a fortnight ago that a swing to Labor of a mere 2.5% was the benchmark by which his performance should be judged, based on the supposed record of byelections brought on by the deaths of sitting members.

Should the result fall short of expectations for Labor, Shorten at least will clearly have his lines rehearsed.

The Prime Minister, however, took a less intuitive tack on Tuesday when he told reporters that if they were in the market for a gauge of his government’s standing in the electorate, the Canning byelection would be “real in a sense that other indicators aren’t”.

Facing what is being hyped as a test of his immediate job security, it seems more than a little odd that Abbott should risk setting himself up for a fall in this way.

One all-too-possible explanation is that a tough line of questioning about yet another bad opinion poll had him grasping at whatever straw happened to be available.

If so, one need only look to the historic relationship between polling and byelection results to get a sense of the danger of such an approach.

Based on observation of 45 federal and state byelections over the past 25 years that were contested by both major parties, a government can ordinarily expect an adverse swing of 2.3%, even if polling suggests no change on the previous election result. On top of this, an extra 1.4% can be anticipated for every percentage point of swing indicated by the polls conducted at the time.

Given that most of the federal poll aggregators currently in business find the Abbott government staring down the barrel of a swing of around 7%, the implied swing for the Canning byelection is around 12% — almost exactly equal to the late Don Randall’s winning margin in 2013.

It should be noted that this model only explains about 46% of the variability in the observed results, leaving plenty of room for byelections to be influenced by their own unique circumstances.

The 26.1% swing that buffeted Barry O’Farrell’s government in New South Wales at the Miranda byelection of October 2013 was fully 14% higher than what the model would have predicted, while the slight swing in the Abbott government’s favour last February when Kevin Rudd pulled the plug in his Brisbane seat of Griffith went 9.5% the other way.

These results might respectively reflect the self-indulgent manner in which Miranda MP Graham Annesley pulled the plug on his political career to take up a job as chief executive of the Gold Coast Titans NRL club (and perhaps also the inspired campaign tactics of emergency services unions), and the dissipation of Kevin Rudd’s strong personal vote.

A parallel for the latter circumstance has been widely noted in Canning, with Senate and state election results suggesting that Don Randall was punching above the Liberal Party’s weight to the tune of around 6%.

Countering this is Bill Shorten’s point about the distinctiveness of byelections caused by the deaths of sitting members, which was presumably informed by the weak 3.7% swing to Labor in the Melbourne seat of Aston in July 2001, triggered by the death of Liberal MP Peter Nugent. The Libs held the seat, providing a welcome morale boost for the Howard government after the 9.7% swing that cost it the Brisbane seat of Ryan the previous February.

Long-range analysis by psephologist Kevin Bonham fails to find much evidence for such an effect, but changes in politicians’ career patterns in recent decades mean there are precious few modern examples to go on.

A more direct measure of the state in play in Canning has been provided by three polls that have emerged over the past fortnight, each of which appears to show the result going down to the wire.

The most recent was a ReachTEL poll conducted for the United Voice union and published in The West Australian on Tuesday, which credited Labor with a razor-thin lead of 50.1-49.9 on two-party preferred.

Most media outlets were happy to run with the headline two-party figure, a close game being a good game from a journalistic perspective. However, the primary vote numbers from the poll had the Liberals with a formidable lead of 14%, which Labor was able to close due to an 85% share of all minor party and independent preferences — not something you should ever expect to see replicated in a real-world election.

If Liberal candidate Andrew Hastie can indeed score the 47.3% primary vote the ReachTEL poll credited him with, Tony Abbott will be breathing a very deep sigh of relief come the evening of September 19. And if the Liberal Party’s internal polling is giving him cause to think such a result might be plausible, his eagerness to be judged by the byelection rather than Newspoll becomes a lot easier to understand.

Randall was a moron and they kept voting for him so I dont expect much to change. That area is a pretty sorry part of WA, Armadale township is a hotbed of bogans and ice and petty crime.

Any truth to the rumour that Border Force officers are out in Canning spruiking for Hastie..

Achtung William, those Reachtel primary figures are pre-extraction of “undecideds”, while the 2pps take “undecideds” into account, and they mostly lean to Labor.

Peter, ReachTEL also had a follow-up question which directed the undecided to jump off the fence, and these responses are included in the numbers I’m going off: Liberal 47.3%, Labor 33.0%, Greens 9.6%, Palmer United 2.7% and others 7.5%.

Tricky. It may come down to a show of hands.