More students flock to journalism courses — but jobs are another matter

Students are enrolling in journalism courses in greater numbers. But they may find themselves writing snappy slogans for soft-drink companies rather than breaking front-page news.

As media outlets cut back on journalists, subeditors, photographers and other staff, more students are enrolling in journalism courses, despite a small and shrinking jobs market.

The continued growth in those studying journalism is a curious contrast to the number of jobs in the sector, which has been rapidly shrinking as advertising revenues drop across almost all forms of the media. While many online newsrooms have sprung up in recent years, offering journalists many new outlets to work for, they generally employ far fewer staff than traditional outlets.

But numerous academics Crikey spoke to said journalism degrees were changing to reflect this, equipping students for degrees in fields that use similar skills to journalism, like content marketing or online campaign management.

For example, James Cook University, a key provider of journalism graduates to rural television and radio stations in Queensland, has recently revamped its journalism degree, after a sharp 50% drop in enrolments this year led to a rethink of what students were after.

Professor Nola Alloway, the dean of the university’s college of arts, society and education, told Crikey that 84% of the graduates of its multimedia journalism degree have found jobs four months after graduation. But the university has axed its journalism degree, instead encouraging students to take up journalism courses as part of a broader field of study. “It’s always smart to be responsive and nimble — journalists who do hedge their bets to improve their prospects are displaying street-savvy in a contemporary world,” she said. The university’s contact with a wide variety of employers, she says, has revealed that media skills are highly valued across a diverse range of fields.

It’s a sentiment shared with the University of Canberra’s Glen Fuller, who told Crikey that the university’s contact with the Canberra federal bureaucracy had found many departments within the government were after graduates with the ability to approach things like a journalist — being able to craft a snappy tweet, or anticipate the media’s needs and reactions, for example.

“We had a course advisory group meeting in 2013 with the heads of communications of the various government departments,” he said. “The key takeaway was someone saying, ‘We want people who know how to use social media like a journalism graduate’.”

To that end, the University of Canberra has broadened its journalism degree, offering courses in content marketing and digital campaigning for interested students.

Australian Bureau of Statistics data confirms the economy’s increasing need for journalism skills, if not for journalists themselves. Between 2006 and 2011, employment in journalism as classified by the ABS actually increased — from 15,573 total jobs to 16,125 total jobs. While employment in print and radio journalism fell (TV was largely steady), it’s the “journalists and other writers — not elsewhere classified” that has ballooned, growing 50% (or roughly 10% a year) over the five years between the 2006 and 2011 census. As Fuller has detailed on his blog, the jobs projection by the ABS for the category, which includes those in many forms of marketing and professional writing, is even rosier — the ABS last year projected growth of 28.7% over the two years to 2016, and growth of 37.8% over the five years to 2019. The average projected growth for all occupations was around 1% a year, showing non-journalistic writing roles comprise one of the fastest-growing sectors of the economy.

What this suggests is that those with journalism degrees should have little difficulty getting jobs. But whether graduates who had hoped to be the next Adele Ferguson will be happy with copywriting for a bank is another question entirely. 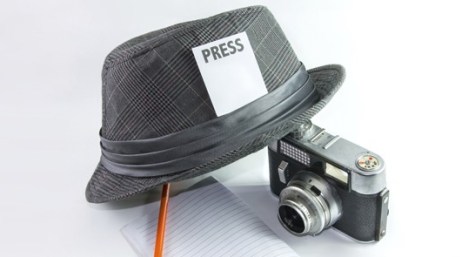 Students are “flocking” to all sorts of courses in which employment opportunities are negligible, and many are doing so knowing this. I was chatting today to a senior Physicist from one of our best universities who talked about students who lack the ability to handle the material in their simplest Physics Courses, but are enrolling for other reasons and nothing can be done to stop the consequent waste of scarce valuable resources.
That’s what has become of ‘education’ in our absurd P.C. world.

Nothing to do with a largely innumerate student body with no discernible skills in the real world?
Hate to sound like gNormless but, y’know, stopped clock an’all that.

Damn and blast the delay – I did not realise that gNormless had already posted his usual tripe.
Soreee!

Thanx for this perceptive report. Of course some students may enrol in journalism subjects or programs to seek to understand a pervasive social phenomenon. Large numbers of students continue to enrol in humanities and experimental sciences despite employment prospects being weaker than other fields, presumably out of intrinsic interest.

Gavin, the underlying problem with student enrolments is that so many enroll in ‘university’ courses with no interest in finding work in subjects they believe may be interesting or even finding work at all. When I was working as a Commonwealth Scholarship and Teachers College Scholarship Guidance Officer at Sydney University in the 1960s, many students, mostly girls, enrolled in Arts/Humanities subjects without any plan to use them for employment, but the cost to the taxpayer was minimal to what is now the case.
Far too many of our ‘university’ courses nowadays are useless for preparing students for actual work in the fields they cover, and the less intellectually-challenged students realise this. Those not bright enough to know it often become embittered. Surely must be an outcome society shouldn’t encourage?
Those Public Figures who understand the folly of what’s passing for ‘education’ at all levels also understand the dangers of pointing this out, so most remain quiet. The occasional academics who raise the issues are given short shrift by their employers and colleagues who benefit from the fraudulent waste of Taxpayers’ moneys.
Crikey, if it were a genuine investigative journal pursuing important social issues would be at the forefront of the campaign. Instead it censors contrary perspectives while giving easy runs to gormless twits who, for example, never show an ability to do more than prattle on with Infants School level jibes about others allegedly being gormless.