Guess what, Miranda Devine is not a fan of Gayby Baby. Yawn.

Authoritarian democracy. The Catholic Weekly has taken aim at many of the nation’s leading journalists, accusing them of one-sided coverage and abusive social media accounts amid the national debate on same-sex marriage.

The coverage relies heavily on the reaction to Monday’s Media Watch segment, which accused the media of not displaying balance in the coverage of the same-sex marriage debate. Many journalists took to Twitter to accuse Media Watch of promoting “false balance”, leading the Catholic Weekly to ask, in its editorial, “Is Australia slipping into authoritarian democracy?”

“As the debate over same-sex marriage continues, it becomes clearer by the day that many Australians do not understand or accept that the outcome is about more — much more — than whether two people of the same sex can legally pretend to be married …

“This has produced a disturbing picture of religious groups and individuals, overwhelmingly — but not exclusive — Christian,actively targeted and silenced …

“What is happening is perfectly clear: the final stages of the decay of liberal democracy and its replacement by authoritarian democracy. For the time being it’s still legal to point this out and talk about it. But now, we ask, for how long?”

Gayby Baby drama continues. The Daily Telegraph has defended its Gayby Baby screening coverage, taking aim at the Education Department for supplying The Guardian with a statement saying no parents had complained about the screening.

“Yesterday the department confirmed the school had indeed received complaints after earlier telling The Guardian none had been made by parents,” a piece today states.

An accompanying comment piece by Miranda Devine accuses the department of “telling lies” about the controversy. It also revealed the Press Council had received complaints about the coverage, while the Tele itself had received “vituperative emails and a planned protest outside our office”:

“Yet the department pretended there had been no complaints from parents, thus portraying our story as inaccurate and, worse, muzzling those concerned parents…

“In true Orwellian fashion, the word ‘complaint’has been redefined by the department. Apparently it’s not a ‘complaint’ unless it’s logged at the school, or if it’s couched in polite language, or if it isn’t rubber-stamped by departmental bureaucracy. Rank sophistry …

“Ostensibly designed to stamp out homophobia, the Proud Schools program aims to eradicate the idea that heterosexuality is the norm in human relationships. When parents complain about this propaganda, their concerns are airbrushed out of existence. And when this newspaper reports these facts we are subjected to a campaign of intimidation.”

Front page of the day. The Northern Territory is suffering from a very particular skills shortage … 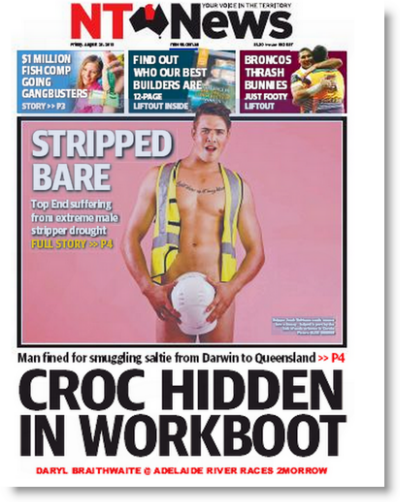 Crikey continues to report trivia instead of dealing with these issues on what Crikey deems to be their merits.
Does it see itself as an investigative media entity or is it merely an entertainment show?

As the debate over same-sex marriage continues, it becomes clearer by the day that many Australians do not understand or accept that the outcome is about more — much more — than whether two people of the same sex can legally pretend to be married …

No, it’s really not.

The State’s only interest in marriage is as a legal contract.