Did he or didn’t he? Heydon plays hard to get with unions, with hearing delayed again

Even more evidence has emerged that Dyson Heydon knew the event he was due to speak at was a Liberal Party fundraiser. But he's not in any hurry to recuse himself ... 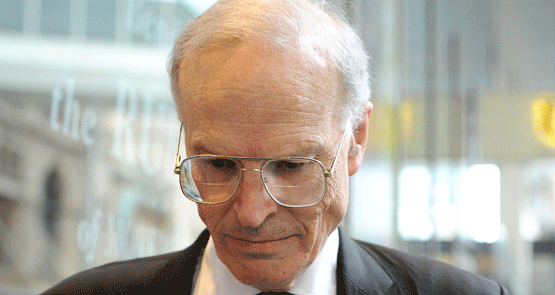 Dyson Heydon was due to decide his own fate as the commissioner investigating corruption in the trade union movement at 10am this morning, but more revelations over his planned speech at a Liberal Party fundraiser have caused the judge to delay his decision, for a second time, until Monday.

Last Friday Heydon heard evidence from the Australian Council of Trade Unions, the Australian Workers’ Union, and the Construction, Forestry, Mining and Energy Union on why he should recuse himself from the highly politicised royal commission because he had, for over a year, planned to deliver a speech for the Sir Garfield Barwick lecture organised by a lawyers’ branch of the New South Wales Liberal Party.

Initial emails released by the commission revealed Heydon had known about the event for a year, but only pulled out in August after asking the organiser, Gregory Barton, whether the event could be considered a Liberal Party fundraiser. This came despite numerous emails prior mentioning it was a Liberal Party event, including an invite with the Liberal Party logo on it.

It was initially unclear what had prompted Heydon to question Barton on whether the event could be considered a Liberal Party event in August, but yesterday The Australian reported that Heydon sent the email following an inquiry by former Labor staffer Marcus Priest to the NSW Bar Association’s Chris Winslow on August 12 about the nature of the event. After sending Priest a copy of the invite, Winslow then emailed Jeremy Stoljar SC, the counsel assisting the royal commission, alerting Stoljar to the potential conflict.

The email, released by the commission yesterday evening, reveals Winslow asked Stoljar if Heydon was “aware that the Garfield Barwick Address, which he is due to deliver, is a Liberal Party fundraiser?”

Stoljar said he would raise it with Heydon.

Accompanying the email was a personal diary note from Stoljar of the conversation he had with Heydon at 9am on August 13, shortly before Heydon pulled out of the event and the story made it into the news. The note says that Heydon showed an email to Stoljar from Greg Barton, in which Barton said it was not a fundraiser. In the same note, Stoljar says Heydon said Burton would know more than Winslow, and it would be fine to go ahead if Heydon got clarification from Burton.

Solicitor assisting the royal commission James Beaton justified the exclusion of these documents by stating that these documents were not part of the original request for documents by the unions, and Heydon was under no legal obligation to produce any documents.

The emails cast doubt on the CFMEU’s assertion that a person could consider that the original emails had been doctored, but they do suggest that Heydon’s email on the morning that news broke could be related to concerns that it was about to get leaked to the media. Winslow does not, however, tell Stoljar that journalists had been asking about the invite.

Heydon is expected now to make a decision on whether to stay on as commissioner on Monday, but the government is already preparing the ground for a potential change in commissioner.

On Thursday, Prime Minister Tony Abbott said that the commission must go on:

Cleaning up aka “shirtfronting” the Labor party was the primary reason for this ill advised and poorly managed inquiry. You bet you are – you bet I am.

Keep holding out long enough and Tony will declare war on Syria and/or round up some noisy kids from western Sydney and nobody’s going to be interested in who knew what when any more.

I wonder if the comms between the commissioner and the PM’s strategy team during this period can be FOI’d?

The subject was “Conservative Hubris”?

Heydon knew there was a problem with this speaking engagement when he was first invited. He said he would be able to do it as long as the RC was over, (and, presumably, as long as the invitation remained secret until then). No matter how he looks at this (whether from “over”, under, or alongside) nor how long he looks at it, there was a problem, there is a problem, and there always will be a problem. To preserve his much-vaunted principles about the law, he has to recuse himself. His delay can only mean he is considering abandoning those principles.

Regardless, the inquiry into union thuggery must continue.