It's on! Now it's off! Now it's on again! Oh wait, no... the Border Force operation planned for Melbourne today was not the most well-executed plan. Crikey journalists Sally Whyte and Josh Taylor were on the ground. 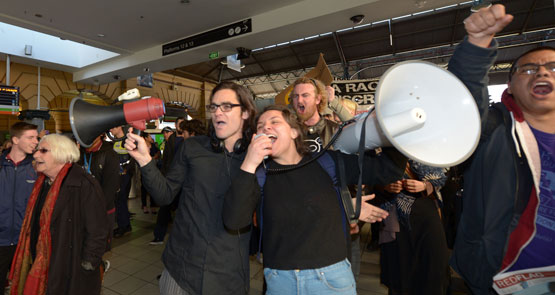 Operation Fortitude was called off this afternoon after protesters descended on Flinders Street Station, blocking a major intersection and streaming into the train station. Australian Border Force officials were nowhere to be seen, with Victoria Police’s media officers informing the media the planned press conference was postponed, back on again, and then cancelled. About 300 protesters chanted that the Australian Border Force was not welcome in Melbourne, comparing them to the Nazis and Gestapo. The protesters focused on the concern that the operation would involve racial profiling.

The Australian Border Force’s press release this morning said that Operation Fortitude would be a joint operation between ABF, Victoria Police, Metro Trains, Yarra Trams, the Sheriff’s Office and the Taxi Services Commission to “support the best interests of Melbournians, targeting everything from anti-social behaviour to outstanding warrants”. ABF regional commander for Victoria and Tasmania Don Smith said in the release: “ABF officers will be positioned at various locations around the CBD speaking with any individual we cross paths with.” While the release said the operation was aimed at anti-social behaviour, it also quoted Smith warning visa over-stayers –  “You need to be aware of the conditions of your visa; if you commit visa fraud you should know it’s only a matter of time before you’re caught out.”

But a “clarifiying statement” released early this afternoon said “In this operation, ABF officers will assist partner agencies by conducting background visa checks on individuals who are referred to us. To be clear, the ABF does not and will not stop people at random in the streets.”

“The ABF does not target of the basis of race, religion, or ethnicity.”

The peaceful protest ultimately ended when word spread that the Victoria Police had decided to cancel the event — for the second time.

“We’ll be back,” protesters shouted.

After the operation was cancelled, Victorian Police Minister Wade Noonan slammed the Australian Border Force, calling the announcement “unfortunate and inappropriate charatcerisation” of what he called a “standard police operation”.

“The State Government was notified this month that Victoria Police would lead a joint-agency operation this weekend in the CBD aimed at keeping Victorians safe.

“We were advised it would target anti-social behaviour and commuters to ensure people got home safely. The community’s safety and wellbeing is always the government’s priority.

“Operation Fortitude was intended to be a standard police operation.

“We fully support the decision by Victoria Police to cancel the operation after the unfortunate and inappropriate characterisation by the Australian Border Force today.”

The operation has been criticised by many corners of politics. In a statement, Liberal Democrat Senator David Leyonhjelm said “either the Border Force are doing racial profiling, in which case they should stop it, or they are harassing everyone, and they should stop that as well. We do not need any more uniformed goons. This indicates that the Border Force should be radically downsized and its workers allowed to do something useful for a living.”

Labor immigration spokesman Richard Marles said: “There is no question that there is an appropriate role for the government’s newly established Australian Border Force to be playing in cracking down on visa fraud.”

“We support those efforts — but what we have witnessed in the last six hours has been a complete debacle on Peter Dutton’s watch.”

The Greens’ Sarah Hanson-Young said: “There’s questions now by lawyers as to whether this has been a breach of human rights. It’s definitely overreach by the minister, but overall it’s border farce.”

Ugh. “we need to ensure that people are behaving appropriately”. (From another report).
Out without a clean hanky – inappropriate.
Protesting sweeps of the citizenry – appropriate.

Fortitude just isn’t what it used to be.

In other countries, they would have fired on the crowd. Lucky for us that didn’t happen, Australia would sink rapidly.

Note the expected mealy-mouthed half condemnation by Labor. Well done the Greens.

Seems like people just think they can do whatever comes into their tiny minds. Those tiny minds should resign from Canberra before they take us so far down we can’t recover. I’m over it!!! We didn’t vote for a border force anyway.
We could check one ID. Maybe we should cancel one dual citizenship and send the mad monk back to EnglandQ