Geelong Grammar in the hot seat ... Canning election material, with no Tony in sight ... Leyonhjelm fires up on Twitter ...

Geelong Grammar in royal commission crosshairs. Revelations of sexual abuse at prestigious Geelong Grammar are set to have a big impact on the school, according to a letter to the past and present parents of the school from principal Stephen Meek yesterday. Meek warned in the letter that upcoming hearings at the Royal Commission Into Institutional Responses to Child Sex Abuse would be “confronting for the School community”. Hearings start on September 1 and are expected to proceed until September 11, covering issues dating as far back as 1956 at the prestigious school.

“It is expected that a number of significant issues will arise in the course of the hearing which will be confronting for the School community and, particularly, for victims of abuse. I have no doubt that providing evidence to the Royal Commission would be a harrowing experience for every victim and I commend their courage in coming forward.”

The letter implies that the hearings will reveal that the school did not react well to allegations of abuse. “I greatly regret that not all of our students received the care and support to which they were entitled,” Meek wrote.

Meek said he would attend each day of the commission to hear directly from victims, but that the school would not be commenting to the media during the proceedings. “The school absolutely condemns any form of abuse, feels deeply sorry for, and profoundly regrets, the abuse that has occurred at the School in the past and continues to co-operate fully with the Royal Commission,” Meek said in the letter.

Abbott AWOL. The people of Canning are getting a lot of attention at the moment, with the byelection following the death of Liberal MP Don Randall set for September 19. This means that they are lucky enough to receive election paraphernalia while the rest of us only get catalogues and bills in the mail. A tipster received this from Liberal candidate Andrew Hastie and promptly sent it to us. The front page of Hastie’s missive features many photos of the former SAS commander, but not a single woman. In the letter (which helpfully also includes a postal vote application — we know where they are going), tells voters:

“My first priority on overseas army missions was always the welfare of my troops and their families back home. If given the honour my first priority in Canning will be to deliver on the needs of local people to help them get ahead.”

The back page of the letter does feature a few photos of women, including Hastie’s wife and Foreign Affairs Minister Julie Bishop. There’s no mention of Prime Minister Tony Abbott, or that Hastie would be part of the Abbot government if elected. It’s already been reported that Abbott has so far been MIA during the campaign — although Bishop, Scott Morrison and Malcolm Turnbull are all expected to campaign in the electorate.

Fibre to the No. As NBN this week announced that the “Fast. Sooner. Affordable” NBN policy implemented by Communications Minister Malcolm Turnbull was actually going to be slower, would take longer, and be more expensive, we discovered that Turnbull has apparently not been discussing use of the message destroying app Wickr with NBN’s CEO Bill Morrow. No results were found in response to a freedom of information request filed by Crikey. While much of NBN’s work is often exempt from FOI under the banner of being “commercial-in-confidence”, it was interesting how quickly the company responded to this request.

The company’s annual report also revealed that NBN has a formal whistleblower policy that allows employees, directors, and suppliers to raise concerns “regarding actual, unethical, unlawful, or undesirable conduct without fear of reprisal and with the support and protection of NBN”. That’s good to know, but NBN still refuses to confirm whether it has ever tried to access the metadata of journalists for the purposes of investigating a leak.

The kids are all right. While the NSW government took just hours to cave into The Daily Telegraph yesterday and ban the screening of documentary Gayby Baby at Burwood Girls High School tomorrow, which no parents actually complained about, a tipster tells us that primary school students from across the state were taking part in the semi-finals of the NSW Education Department’s Multicultural Perspectives Public Speaking Competition. Our tipster’s own child is taking part, “though I’m not going to mention the names of any of the competitors because I don’t want Piers Akerman telling them how abnormal they are in a newspaper column”. The topics to be debated by grades 3 and 4 include “the same but different”, “kids can make a difference” and “every family has a story”. Grades 5 and 6 could choose to speak on “respect”, “team Australia” and “words can hurt”. Just in case we needed a reminder that nine-year-olds can be more accepting than adults.

Leyonhjelm fires up. While we know that Senator David Leyonhjelm cares nought for what people think about him and believes he can say what he wants to anyone on the internet, it seemed a good time for a reminder of what this means in practice. A tipster sent us these tweets, in which Leyonhjelm swears at one user, and in reply to another who says she doesn’t agree with his position on guns uses the acronym “DILLIGAF”, which means “do I look like I give a fuck?”. While Leyonhjelm’s term in the Senate is not up for a few more years, we wonder if swearing at voters will help him get re-elected. 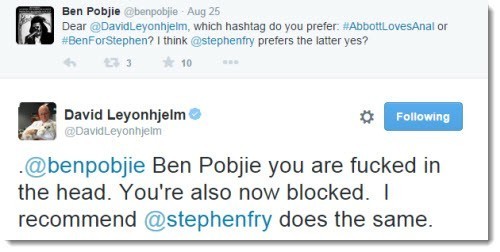 Dramatic arts.We hear from a tipster that the problems at the Art Gallery of New South Wales continue, and that the budget cuts are starting to have an impact on the pieces of art in the gallery’s care. A tipster is concerned about the state of the Brett Whiteley Studio: “The artworks in storage on site aren’t being correctly cared for. The AGNSW is suppose to be looking after the collection.” It was reported earlier this year that the gallery was looking for savings after of around $800,000. We asked the gallery if cuts to the budget were affecting the storage of artworks, and were told by spokeswoman Simone Bird: “Artworks stored at the Brett Whiteley Studio are well preserved with no deterioration. The Art Gallery of New South Wales is presently looking to upgrade the air-conditioning system at the studio.”

Dog days are over. Yesterday was National Dog Day, which Labor MP Stephen Jones used as an opportunity to post this photo from the archives of his springer spaniel, Louis. The dog is a cutie, but we’re not sure what to say about the mo and haircut. 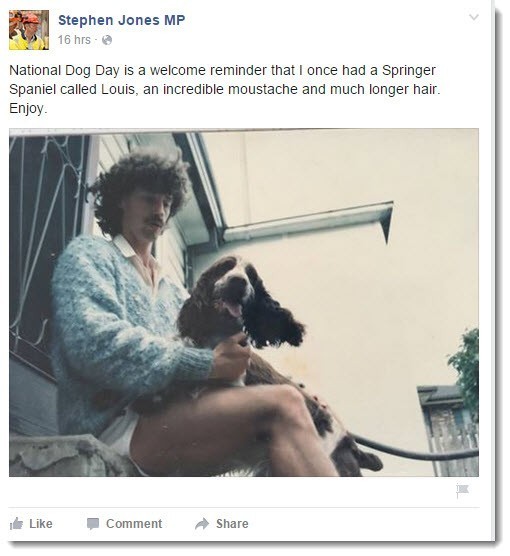 For someone who was accidentally elected (by nomenclature-challenged Liberal voters), Leyonhjelm has a pretty big mouth.

The voters of Canning must be canny or stupid. The Liberal option is a very junior military officer who seems to have done nothing but time in SAS. Has he attended uni or some college of education? The libs have wasted the opportunity to get a well credentialed professional. But WA likes its cowboys.

If Hastie gets in, he will be able to form a coven with the loathsome Nickolic and other drooling warmongers.

David Leyonhjelm certainly does not look like he gives a fuck about his constituents’ opinions.

Which is quite embarrassing, given that his lifestyle is financed by us-the-tax-payers in return for him representing his constituents – which would require him to give a fuck about their opinions.

Seems like he’s just one of those leaners who feed off others people’s work and think they are entitled to something for nothing.