The Tele's war on Clover continues. And other media tidbits.

Fairfax to let go two-thirds of newsroom. Fairfax’s multi-award-wining Newcastle Herald is set to lose two-thirds of its editorial staff, according to journalists at the paper. Management has suggested 37 job losses as part of the NewsNow rollout, according to Herald journalist Rosemarie Milson on Twitter.

She adds that the Maitland Mercury is being cut from five days a week to three, while the Singleton Argus will go from two days a week to only one. Fairfax has confirmed the job losses. The Newcastle Herald, through its Shine the Light campaign, was pivotal in helping expose the child sex abuse scandal in Australia’s Catholic churches.

Last week, Fairfax confirmed it was cutting 25 full-time-equivalent positions across its Sydney suburban papers, along with another 16 positions slashed from The Land. — Myriam Robin

Vanity publishing. The City of Sydney is looking for a new photographer with photoshop skills (an industry standard these days). Here’s how the Daily Tele presented its “exclusive”, um … job application? 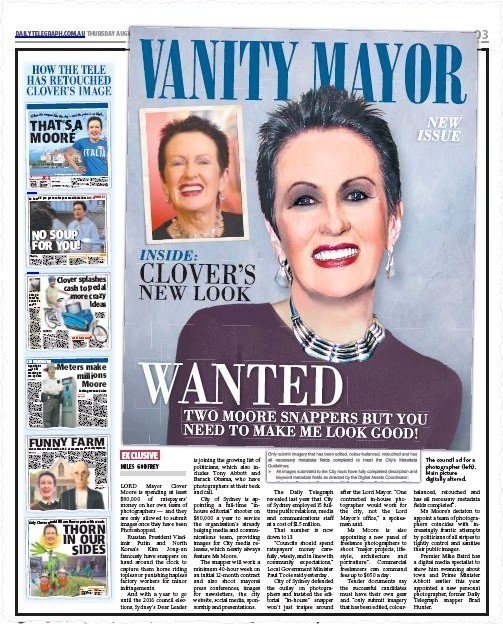 In the regular “The Truth the Telegraph Won’t Print” section of Sydney mayor Clover Moore’s website, she has (again) accused the Tele of “deliberately contorting the facts” — which, in this case, appear to be that the photographer will work on council projects, and not be personally tasked to the Mayor (as we would have assumed based on what the Tele published). “The City has advertised for a photographer to help promote and provide a record of City events and projects– from park openings and building projects to citizenship ceremonies and community events. He or she will be contracted by the City to take photos for the whole organisation, to appear in publications, newsletters, online, historical documentation, sponsorship submissions including proposals and tenders, and internal and external presentations. This is standard practice,” the Mayor (or her media team) writes. As for needing to be handy in photoshop, the Mayor writes that it’s industry-standard for photographers to be able to balance colours and edit photos, now most commonly done using the Photoshop editing software.

There’s only one solution to this, your correspondent thinks: the City of Sydney should hire the Tele’s best photoshopper out from under them. No more Tele photoshops, and a clearly very creative individual on staff, to boot. What’s the downside? — Myriam Robin

This one’s on Max “The Axe”. Southern Cross Austereo has joined its bigger rival, Seven West Media in another round of impairments.

Southern Cross, under a new CEO in former Ten boss Grant Blackley, this morning revealed impairment losses of $361 million for 2014-14, against $392 million the year earlier. That pushed the company into a big loss for the year of $285 million (3.7% under its loss for the previous year). Underlying full-year profit fell 18.6% to $64.8 million as revenues fell 4.6% to $611 million.

Blackley got his managementese on track in this comment from this morning’s statement: “Whilst the financial results have been disappointing, I am excited by the opportunities that the group presents and have begun implementing a number of strategic and operational initiatives that are focused not only on delivering short term improvements in financial performance, but positioning Southern Cross Austereo for long-term success.”

Under the spin, the real story is that the loss for 2013-14 was the doing of the old management regime, as well as the chairmanship of Max Moore Wilton. They left earlier this year and the new team led by Blackley hasn’t been in charge long enough to make a difference, but decided to add another $361 million to last year’s pile of red ink and blame it on the old mob. Southern Cross will be saved from itself if the federal government changes the reach rule for TV audiences, which will lead the company to get a takeover bid. And remember much of the problems in its radio business were self-inflicted, with various atrocities at 2Day FM in Sydney, the London nurse prank call and then allowing the high rating (but atrocious) Kyle Sandilands and his sidekick Jackie O to depart 2Day FM for a Sydney rival and take millions of dollars in ad revenues with them. — Glenn Dyer

Nine writes down Sky. Poor David Gyngell. Last year, he made $19.59 million, boosted by just on $10 million of shares and other benefits (including a big fat cash bonus) as part of the float arrangements. This year, he’s down to $4.48 million — a flat $2 million a year and other short and long-term incentive payments. The $19.5 million made him the highest paid Australian CEO for the 2014 financial year, but this year it’s around the middle of the pack (though he’s still getting over $80,000 a week, or well over $11,000 a day).

This morning Nine joined rivals Seven West Media, Ten and Southern Cross in writing down the value of its TV licences and goodwill. Nine’s totalled $847 million all told in impairments and other charges (offset by a tiny profit on the sale of a small business). In that, there was a very small, but very intriguing write-down — $25 million against the value of Nine’s 33% stake in Australian News Channel, which owns Sky News, the dominant pay TV news channel on Foxtel. Nine said the write-down was necessary because there was no certainty the carriage agreement the channel has with Foxtel will be agreed to by the end of 2017. That’s because News Corp wants to buy Australian News Channel and has threatened to start a rival channel if there is no deal. News also owns 50% of Foxtel and controls the management. The write-down should lead News to announce a successful offer for Australian News Channel in the not-too-distant future. — Glenn Dyer

Video of the day. Only 70? We guess there must be a part two on the way.