Greg Hunt's failure to do adhere to legal requirements for the approval of the Carmichael mine explicitly broke a commitment Hunt made to parliament in 2013. 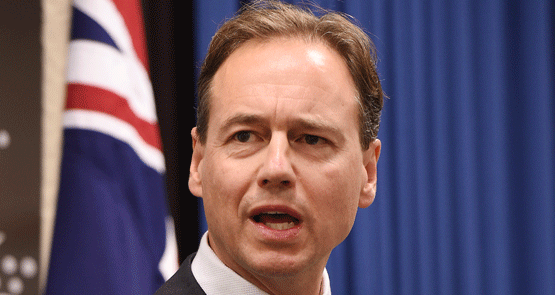 Greg Hunt’s bungled approval of the Carmichael coal and rail project broke an explicit guarantee the Environment Minister made in Parliament during the government’s first, failed attempt to gut the Environment Protection and Biodiversity Conservation Act.

Within days of coming to office, the Abbott government introduced a bill to remove failure to consider conservation advice — i.e., exactly what Hunt would do in the Carmichael mine case —  as a basis for overturning an approval of a project. Hunt said he would have no need of the legislation, because as newly minted Environment Minister he would never fail to consider conservation advice when ruling on a project. Except, of course, that is exactly what Hunt just did.

In a remarkable anticipation of exactly how Hunt and his bureaucrats in the Department of the Environment would fail to observe the requirements of the EPBC, Hunt told Parliament in December 2013:

Hunt’s guarantee in Parliament, “subject to all the strictures which apply to ministerial statements on the floor of this House”, turned out to be worthless: his July 2015 approval of the Carmichael project was, by the government’s own admission, made without conservation advice in relation to two endangered species. As the Australian Government Solicitor told the Federal Court about Hunt’s approval,

“While the Minister had some material before him setting out the impacts of the proposed action on the Yakka Skink and Ornamental Snake at the time he made the decision, he did not have before him copies of the approved conservation advices for either of these species.

In deciding whether or not to approve the proposed action, the Minister did not have regard to the approved conservation advices for the Yakka Skink and Ornamental Snake as they were not included in the material before him at the time he made the decision.”

An approved conservation advice is prepared by an independent committee and provides information about an endangered species, including current status and threats. Under the EPBC, they must be considered when approving projects that may affect an endangered species. Hunt’s bill was intended to “fix” the overturning of a decision by then-environment minister Tony Burke to approve the Shree Minerals mine in the Tarkine are in Tasmania. The bill would also have prospectively prevented the overturning of future approvals on the basis that conservation advice wasn’t considered — exactly the basis on which the Commonwealth eventually agreed it needed to withdraw the Carmichael approval.

As Environmental Justice Australia CEO Brendan Sydes, who spotted Hunt’s comments, wrote at the time, this would have had the effect of keeping the obligation for the minister to have regard to conservation advice in the EPBC, but removing any legal consequences of not doing so. Hunt’s comments were in response to a challenge from Greens MP Adam Bandt. And appropriately, Bandt used the example of Abbot Point, the Adani-operated coal terminal to which coal from the Carmichael mine will be transported, the expansion of which has been highly controversial.

Given both the Tarkine and Carmichael decisions were overturned because of a failure to consider approved conservation advice, it raises the question of just how bad things are within the Environment Department that the implementation of its long-standing bread-and-butter legislation, the EPBC, keeps going off the rails so badly.

Hunt must resign. But in a government so dysfunctional this is probably seen as a minor blip.

And he would’ve gotten away it entirely if it wasn’t for those pesky greenies!

Hunt can’t see the wood for the trees. And as such, when it comes to the concept of “endangered species”, he is one.

And to think, that kind of mistake – with attendant poor publicity and such – would see a lesser public servant fired.

The worst minister in the worst cabinet since federation..

What a moron he is, but is he any worse then the rest of the Cabinet?