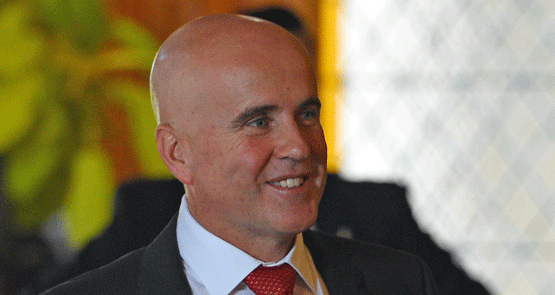 Education Minister Adrian Piccoli veered off-topic to condemn The Daily Telegraph for outing an affair former Labor premier Nathan Rees had had with a constituent. “I take this opportunity to express my sympathy to the member for Toongabbie and to his wife for the appalling way they were treated in The Daily Telegraph yesterday,” he said.

“The way that Nathan Rees and, in particular, his wife have been treated is utterly appalling. I suggest there would be very few members of Parliament, or indeed members of the media, who could put up their hand and say that they have a perfect personal life. I express my sympathies to Nathan and to his family. In my humble opinion, it is a personal matter and should remain that way.”

This adds a curious dimension to the now-infamous Gayby Baby splash the Tele ran yesterday, which was highly critical of Piccoli, placing him at the centre of the controversy.

Yesterday morning, the paper revealed that Burwood Girls High School had sent a flyer to parents last week advising them that it would be screening, during school time, the award-winning documentary Gayby Baby, which was directed by a graduate of the school.

Gayby Baby focuses on same-sex families raising children and the challenges this involves. The paper quoted religious youth-group leaders slamming the documentary, saying it “promoted a gay lifestyle”. The paper said parents were outraged by the screening (though The Guardian contacted the Department of Education yesterday and learned the school had received no complaints from parents about the documentary).

The coverage drew widespread criticism from gay groups and rival outlets. Many have written this up as an example of the paper over-egging a moral panic in a bid to sell papers to its conservative readership (though it’s worth noting the splash appears controversial even within the Holt Street clique — Tele journalist Vicky Roach has written an opinion piece on News Corp sites backing the screening). But some Sydney media insiders are seeing a deeper pattern, viewing the coverage as another run in the paper’s regular critical coverage of Piccoli.

As Education Minister, it was Piccoli who was forced to respond to the scandal. An accompanying opinion piece in the Tele yesterday by Piers Akerman called for his sacking. “Piccoli has permitted [Burwood principal Mia] Kumar to install this agenda into her curriculum,” Akerman thundered. “If this is the best he can do in the face of a deliberate flouting of the rules by a principal who has institutionalised a political campaign in her school’s agenda, he should be sacked.” 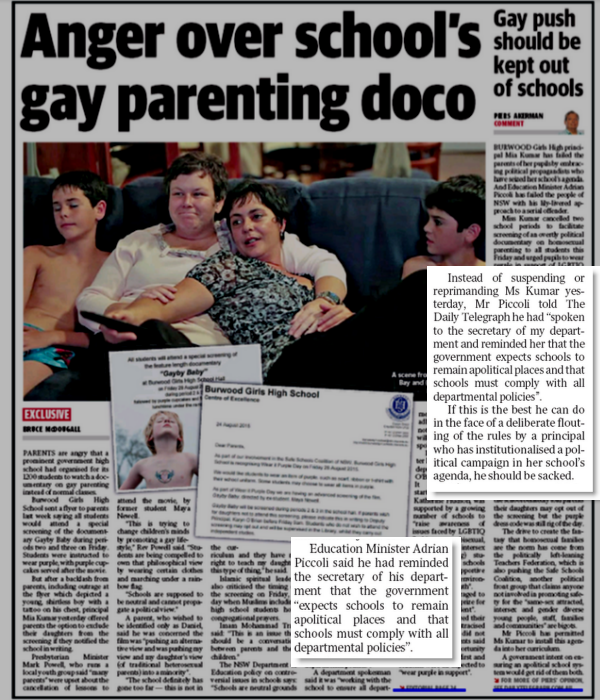 The Tele has been after Piccoli for months. In June 2014, when Piccoli told the ABC he would, in the party room, argue against Premier Mike Baird’s signature electricity sell-off policy, the Tele ran a front-page splash calling him a “dimwit”. It illustrated the highly critical coverage with a list of “Piccoli’s blues” since April 2012, listing the Education Minister’s many supposed faults. That day’s editorial called him “not the Coalition’s brightest” and accused him of playing “socialist politics”, in case the front page was too subtle for readers.

Earlier this month, the paper accused him of playing “truant” when he missed the first day of Parliament after the winter break — his office said he was on “annual leave”, but the Tele found out he was in Italy. In January 2014, the paper sent its European correspondent to tail Piccoli on a taxpayer-funded research trip to Finland — they papped him dining, arriving, and beanie-shopping, after earlier coverage criticised him for taking the trip at all (part of a European trip to present a paper to the World Education Forum in London).

If Piccoli, one of the more left-leaning members of the Baird government, thought issuing a memo banning schools from showing the documentary during school hours would get the Tele off his back, he’s singled out again today on the front page — the star of a story on politicians of both sides taking taxpayer-funded “study tours” to “the world’s best holiday hotspots”.

For New South Wales parliamentarians, the lesson is clear — criticise the Tele at your peril.

The Australian cricket team is usually the NSW team so maybe the Australian Liberal government should be the NSW team. If they are pissing off the Tele and the loathsome Akerman they must be doing a good job.
I want to know how to get the Tele off my Facebook feed, can anyone help?

I can’t make out how showing the film is beinbg political. Unless it is the old 60s saw that the personal is plolitical but that would be too complex for the terrorgraph’s … I can’t call them readers… buyers? audience?

NSW & fed pollies might be understandably scared of the Tele thanks to its reputation, particularly under current editor Whittaker, for relentless, vicious, obsessive bullying of those it doesn’t like. But the sooner they realise the Tele doesn’t control votes the better. Full credit to those pollies who are willing to speak up and realise that the Tele’s power is overstated, and it only gets its way by terrifying pollies, not by convincing the sensible public.