You can’t sit with us. We are often accused of being impolite, but even Ms Tips knows that uninviting someone from an event after they had kindly RSVPed is quite rude. Member for Higgins and parliamentary secretary to the Treasurer Kelly O’Dwyer made quite the faux pas yesterday by calling Crikey arts correspondent Ben Eltham and informing him that he could not attend the arts forum that she would be holding with Minister for the Arts (that he likes) George Brandis in Prahran tomorrow morning. The event is billed as “an opportunity for Minister Brandis and me to receive your feedback on the Government’s policies in relation to the Arts sector and to update you on recent changes,” and Eltham signed up to hear what Brandis would have to say. But then O’Dwyer herself rang up our intrepid arts journo and asked him to stay away. “I got a call from Kelly herself saying ‘we’ve done a lot of these things, and we always ask for the media not to turn up because we want constituents to have their say without the media being in the room’. She did offer to put me in touch with Minister Brandis’ office, though.” Brandis has cut more than $100 million from the Australia Council and funneled it into a new National Program for Excellence in the Arts, but little information has been provided about who will get funding under the new program. When more than 60 members of the arts community met with politicians in Parliament House in June, Brandis and other members of the government were nowhere to be seen. The event invite is here, if any Crikey readers are in O’Dwyer’s electorate and want to let us know how it goes — but be warned, attendees are being screened by a staffer. Yay for democracy.

Stop trying to make Fetch happen. Not even a day after TPG got the all-clear to buy rival internet service provider iiNet, and already the assimilation has begun. Yesterday morning iiNet informed its customer service staff that they were no longer allowed to sell the IPTV product Fetch TV to new customers. This service is a bit like a DVR and Apple TV in one. You can use it to record TV, watch a few of its own channels, and access other on-demand video like Netflix and iview.

In a very TPG-like manner, but very unlike iiNet, there was no official announcement of the end of the Fetch product, just a notice on the company’s website.

No reason was given by iiNet as to why the product was withdrawn. TPG does have its own IPTV product, though. Previously iiNet, and its subsidiaries Internode, Adam, and TransACT, were some of the Fetch’s only customers outside of Optus, so Fetch may end up being the second IPTV service to bite the dust after the arrival of Netflix in Australia.

She doesn’t even go here. It’s one of the oldest tricks in the book, a member of government trying to claim responsibility and kudos for funding made by the previous government, and member for Corangamite Sarah Henderson was caught out this weekend.

Henderson claimed that the Liberal government had provided $1.5 billion worth of funding for the Regional Rail Link Project in Victoria, which opened in June this year. While the funds were “provided” by the Abbott government, they were part of a $3.2 billion Labor government commitment. While Henderson was right that the government was honouring a previous commitment, it’s not like it enjoyed it — Abbott has long said he is against federal funding for public transport infrastructure.

The Prime Minister also held to the principle this year, saying that he would not support the Victorian Labor government’s plan to invest the federal money intended for the East West Link into the Melbourne Metro Rail project.

“We do not fund urban rail projects; we fund roads of national significance and we fund nationally significant freight rail projects but we don’t fund commuter rail.” He told Melbourne’s 3AW radios station.

So they won’t commit any money to rail projects, but will take the credit when they hand over the money of someone else’s promise.

The dumbest passwords you will ever meet. As if those who put their personal details in the hands of Ashley Madison haven’t already been through enough, an American researcher has now found that many of the users on the site are inept at picking decent passwords. Dean Pearce spent five days and three hours to reveal a total of 4000 passwords registered to accounts that were exposed in the hack, with unsurprising results. He found the most popular passwords were very basic, with 202 of the 4000 cracked using “123456” and 105 using “password”. He’s published a list of the 20 most common passwords he managed to crack accounts with:

On Wednesdays, we wear lavender. During their press conference in Bamaga this morning, the Prime Minister decided that Social Services Minister Scott Morrison was looking a bit unkempt. With ultimate concentration, he proceeded to pick at ScoMo’s lavender polo, while Morrison spoke to reporters. Only a really close friend could get away with that (or maybe Abbott was placing tracking devices on ScoMo in case he tries to instigate a spill, as The Australian seems to be agitating for?). The shirt is quite a fetching colour, and since it was pointed out by BuzzFeed yesterday, we can’t help but notice how fond the Social Services Minister is of the many shades of the colour. Is it part of the mission to soften his image? We did some very investigative searching about the psychology of the colour purple and found this very scientific and reliable answer: 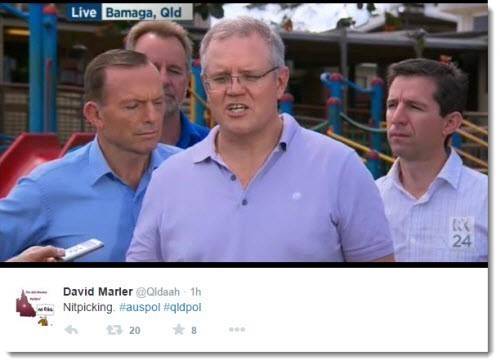 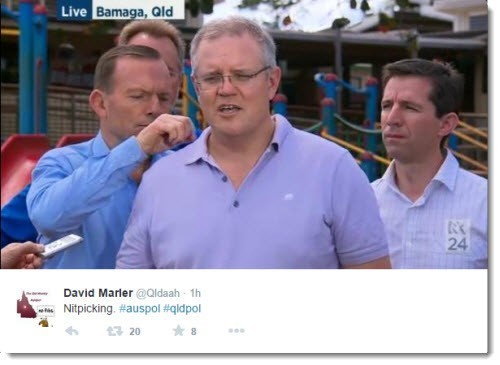 As an iinet customer of long standing, I looked at their website just now -nothing about the takeover going through. Have received no notification either. Poor communication.

Bimbo O’Dywer’s idea of “feedback” – like that “listening tour” of Ruddock’s – when he had a go at that young Muslim woman about airing views that the government didn’t pass?
[Someone should tell them “Being Right isn’t necessarily the same as being correct”?]

O’Dwyer, big one fool. But that shirt, that sort of thing must, repeat must be blue!!!

Abbottrocious is simply aping (sic!) the behaviour of most mammals in grooming an Alpha in the hope of ingratiating himself.