What will become of Greece's ruling Syriza party? 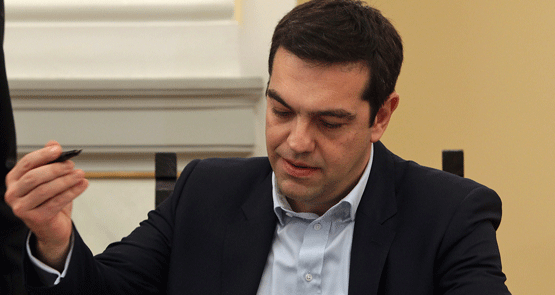 When a left-wing breakaway party calls itself Popular Unity, you just know it’s tempting fate. Following the passage of the third bailout/deal proposal through the Greek parliament, the ruling Syriza party has split, with 25 members of the “Left Platform” group leaving to form the new outfit. The split leaves Syriza with 124 members in the 300-seat parliament, prompting PM Alexis Tsipras to resign and request fresh elections from Greek President Prokopis Pavlopoulo. Prior to that occurring, the next two parties have the right to try to form a government — the centre-right New Democracy first, and then either Popular Unity (if it is ratified as a party) or the neo-Nazi Golden Dawn outfit. None will be able to. Syriza remains in alliance with the nationalist ANEL group (#Tsipraslovesanel), which has 13 seats. ND is pro-deal, but only has 76 seats, and support from Pasok and centrist mob “The River” wouldn’t do it. Neither Popular Unity nor Golden Dawn would go near each other, and there aren’t 151 anti-bailout votes anyway. So an election it is.

With PU departed, polling at 8%, Syriza is polling at 28%, down from 36%, with ND at 25%. Should those proportions hold, then a new election would simply reproduce existing parliamentary numbers — always recalling that Syriza’s 124 seats include the 50-seat bonus gained by the largest party in each poll. The election campaign might well create movement, and it might not go well for Syriza. More could depart to PU, and some might also return to Pasok and New Democracy, now that Syria has done the dirty work of getting a deal. But Syriza may also get voters from centrist groups such as “The River”, since they have basically fulfilled what such voters wanted. The movements may well cancel each other out.

To a degree, the split offers voters a chance to make their intentions explicit — since Popular Unity can now argue openly for a default and an exit from the euro. Their anger was provoked by Tsipras’ decision to accept/capitulate to an EU deal, following a referendum on an earlier deal. The third bailout offer had a larger component of debt repayment cash, but included stringent conditions on switching taxation to VAT, raising the pension age, and embarking on a round of privatisations. Tsipras has been widely assessed as having capitulated after hours of heavy threats from EU leaders in a marathon meeting — but it may also be that he got something of the deal he wanted. Quite aside from significant debt relief, it may well be that Tsipras wanted some of the structural “reforms” to be imposed by the EU, including relatively petty stuff, such as the opening-up of pharmacies — currently run in a licensing system, said to hike drug prices — to generalised competition.

Tsipras and others (including former finance minister Yanis Varoufakis) have argued that exiting the euro is too risky, with the prospect of hyperinflation and a collapse of the import-export sector in the weeks following any such move. That’s one reason why Varoufakis has stayed with Syriza — though he has spent his time making helpful comments, such as branding Tsipras “a new de Gaulle or Mitterrand”, trying to become a figure of national compromise. Varoufakis argues that Syriza leaders have become transformed into the very people they set out to oppose, he who fights too long against dragons, etc, and he was reported to have had a cunning plan to issue a parallel payments currency, seize the Greek central bank (metaphorically — only about 8% of the country’s euros are in actual cash) and dare the EU to chuck them out. Tsipras vetoed this as too risky — or whatever the Greek phrase for “too clever by half” is.

Varoufakis is currently proposing a system of ECB bonds to swap out unmanageable debt, in which the ECB guarantees the part-servicing of the bond but not the … no I don’t get it either, but it’s here if you want to have a look at it. His slightly addled fanbase don’t seem to realise that he too is committed to debt repayment — a fictional process, but with real interest payments — rather than a Grexit and a hard default. That latter position is the one held by former Syriza economist Costas Lapavitsas, who has departed with Popular Unity, and who believes that such a transition would be far more straightforward than is being made out.

Maybe, but there’s a difference between opposing austerity and ending the worst of imposed poverty, and therein lies the difference between many in Syriza’s left — formed when the party had 3.5% of the vote — and its new voters, who swelled its vote to 36%. Most aren’t willing to take the risk of a Grexit, and appear willing to back any scheme that makes things less worse than they would otherwise be, while offering the possibility of some sort of path upwards and out. To what degree that split follows class lines is less clear: the anti-euro, anti-EU KKE (Communist Party) takes 6% of the vote, but it’s a self-selecting group, not a solid class base. The desire to stay in the EU and eurozone, and get the least worst deal possible appears to be a pretty broad front.

Nevertheless, should even this compromise process falter and push Greece deeper into the recession underway — the hope is that having the deal signed, and releasing some liquidity and market confidence, will turn that around — Popular Unity may gain a sudden jump in its fortunes over the next 18 months or so, as occurred with Syriza itself. But with competing narratives within the new party, it will be hard-pressed to avoid further splits, and a drift into that terrible trap of the left, where the name of the party comes to be: two words, two lies.