Who is Bill Shorten? Or rather, who do voters think he is?

In the course of a prime ministership that will shortly chalk up its second anniversary, Tony Abbott has become all too accustomed to alarming opinion poll results.

Yesterday’s result from Essential Research offered some sort of respite, but it was unmistakably at odds with the broader trend of polling over the past six weeks, which has signalled a dissipation of the Coalition’s gains since the Liberal leadership spill motion in February.

Nor has this been the first time the government has experienced a false dawn. In the months that followed the MH17 disaster in July last year, it appeared for a time that the public was moving on from the backlash that followed the government’s first budget the previous May. However, these gains had ebbed away by the time the year came to an end, and new depths were to be plumbed when Abbott got the new one under way by awarding a knighthood to Prince Philip.

This time around, the government’s deteriorating position is all the more troubling for being accompanied by something it wouldn’t have been factoring in to even its most pessimistic assessments — actively good news for Bill Shorten.

However irretrievable the public image of the Prime Minister may appear to be, the Coalition has clearly been hopeful that voters might be reluctantly persuaded back on board come election time by a campaign targeting doubts about the bona fides of the Opposition Leader.

An idea as to how such a campaign might look was provided by a video the Liberal Party put together for its Federal Council meeting in late June.

Whatever else might be said about the video’s crude assemblage of unflattering photos, scary music and booming-voiced Aussie bloke voiceover, it undoubtedly stands testament to the accumulation of raw material for attack ads provided by Shorten’s eight-year career as a parliamentarian.

Better still, the video suggested the Liberal Party had put its focus group research to good use by identifying a unifying theme to match the presumed three-word attention span of the television-viewing swinging voter: namely, that Bill Shorten has “too much baggage”.

While this can be largely taken to refer to his role in successive leadership putsches, the video makes it equally clear that voters haven’t heard the last of Shorten’s famous declaration of unconditional support for whatever it was that Julia Gillard might have been saying about Peter Slipper’s speakership in 2012, or his recent admission to Melbourne talk radio host Neil Mitchell that he had lied to him when he claimed not to have been involved in leadership talks shortly before Gillard was deposed in June 2013.

Viewers were invited to draw the conclusion that Bill Shorten was doomed not to learn from the hard political lessons of the Rudd-Gillard years, as he was “too weak” to stand up to the unions, the Greens and the left in general.

As of the end of June, it appeared that voters were drawing such conclusions without any help from the Liberal Party.

This point is illustrated by the chart below, which shows trend measures of both Tony Abbott’s and Bill Shorten’s net approval ratings (meaning approval minus disapproval) from all polling conducted since the 2013 election. 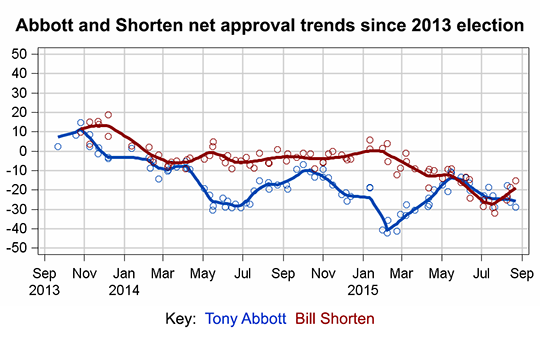 After performing respectably throughout 2014, Shorten spent the first half of this year with his ratings in a steep decline, before plunging to a new low in early July — so low, indeed, that he fell below Tony Abbott for the first time since he assumed the Labor leadership.

Some insight into the attitudes underlying this trend was provided when Roy Morgan conducted a survey of perceptions of the leaders in late July, in which respondents were invited to briefly state why they felt the way they did.

Out of 114 negative responses for Shorten, 23 invoked his union background, which included 16 that in some way cited his appearances before the trade union royal commission.

While some such responses were quite specific (“lied about taking donations from a big business”, “he gets amnesia when it suits about the expenses”, “they made a billion dollars for the shareholders but the people that did the work should have benefited”), others were rather more impressionistic (“the union business with that money”, “his inquiry thing is a bit dodgy”, “I thought he was all right until all this latest publicity came out about the unions”).

It would appear that the controversy over the past fortnight surrounding the trade union royal commissioner, Dyson Heydon, has left a similar range of impressions both vague and clear, but on all counts favourable to the cause of Bill Shorten.

Since news of Heydon’s scheduled appearance at a Liberal fundraiser broke, two polls have been published gauging leadership approval — yesterday’s Newspoll in The Australian, and last week’s Ipsos poll in the Fairfax papers — both of which showed Shorten’s net approval rating improving by 10%.

However it might be that the royal commission’s difficulties end up being resolved, the findings suggest that voters who had hitherto perceived it as a judicial exercise are now seeing it through the lens of Tony Abbott’s aggressive and divisive brand of politics.

That’s certainly not to say that voters’ doubts about Shorten have been dispelled. With Newspoll and Ipsos both recording Shorten’s disapproval rating at around 50%, it’s clear that the other recurring themes of the Morgan poll responses — that he is “ineffectual”, “has no policies” and “stabs other people in the back” — remain substantial hurdles on his road to The Lodge.

But to the no-doubt considerable extent that the royal commission was conceived with political objectives in mind, Shorten’s recent recovery suggests it could well end up proving to have been an expensive flop.

If “Lucky Bills” streak holds Abbott will scrape home in Canning and bumble his way to oblivion..