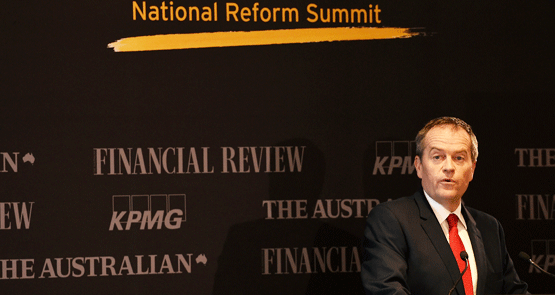 There’s one significant group missing from today’s National Reform Summit, indeed, the most significant group of all — voters. They’re present only in the vague sense as a recalcitrant mob who must be convinced, persuaded, gulled or bribed into accepting economic reform by their representatives and the political class — politicians, most directly, but also business groups, NGOs, unions, academics and the media. Essentially the summit is a quest for better techniques for persuading voters to accept reforms they don’t like, a marketing conference for the policymaking elite.

There’s a certain irony in the sponsorship role of the two national newspapers, The Australian and The Australian Financial Review. Until the last couple of years, Fairfax Media’s history is a prime example of how not to conduct reform — it has been a tale of missteps, multibillion-dollar losses and write-downs, while News Corp has written off billions of dollars in value from overpriced newspaper assets in Australia, the US and UK (and is now quitting online education after wasting US$1 billion on that venture). The Oz itself loses tens of millions of dollars a year, rendering any advice it has to offer about the need for greater economic discipline hollow.

But both organs are part of the reason why economic reform is so difficult, and economic debate is so poor. The Oz rarely lets appreciation for good policy get in the way of its agenda to promote the interests of the Coalition (admittedly, its News Corp tabloid cousins are even more blatant and hypocritical in supporting the Coalition no matter what the issue) and runs a stable of right-wing commentators like Judith Sloan and Henry Ergas, who mechanically rehearse the same tired neoliberal cant. And that’s before you get to the paper’s rank denialism when it comes to the most important long-term economic reform challenge facing Australia, climate change — a subject that is, astonishingly, absent from the summit agenda.

And the deregulationist, business-uber-alles narrative that’s the stock-in-trade of the Fin also systematically ignores reality. Look no further than the industrial relations debate, where the Productivity Commission’s draft report establishing the effectiveness of the current IR framework was barely a blip in the endless promotion of a narrative of inflexibility and over-powerful unions.

If it’s to be effective, the summit should acknowledge what we’ve been doing well. Not what the Hawke, Keating and Howard governments did, but what the Rudd-Gillard governments did (or, crucially, didn’t do): low inflation, a flexible IR system that enabled low wage growth in a weak employment market, falling unit labour costs, low industrial disputes and a change in the mindset of millions of Australians about their finances, which has had them save furiously and de-leverage (and all without an Accord in sight!). Acknowledging these successes, rather than sticking to the “we’ll all be rooned” dogma, will enable the lessons of their implementation to be learnt.

But while attendees might hope the summit uncovers some magical formula to gird the loins of voters for reform, the fact that the Fin carried the likely recommendations of the summit suggests the outcome will be unsurprising — a mishmash of policy positions carefully phrased so that a disparate group of lobbies can all agree (“you let us mention flexibility, we’ll back higher super taxes”, etc). About the only attendee seemingly willing to acknowledge the need for meaningful engagement with voters was Reserve Bank governor Glenn Stevens, who noted “”reform” is a term that excites the intellectual elites and the various interest groups (including those who feel they have something to lose from reform) but doesn’t do much to excite the general public. And getting buy-in from them is ultimately critical. To be sure, they have to be led. But they have to be convinced too.

If voters were actually present, the outcome would be less predictable: participants would have the chance to ask them how they could be convinced and why, currently, they appear to unconvinced. Voters might tell them that they often see the benefits of economic reform flow not to the community, but to the rich and corporations (which is only partly true; we’re all richer from decades of economic reform, but some have benefited disproportionately). They might explain their unease at the decades-long shift from a more interventionist, communitarian economic model to a market-oriented, individualist one in which they’re told that they’re on their own, and why safety nets like Medicare and the pension are important, and how they worry that their kids won’t be able to afford a home (even as they themselves profit from rising house prices).

And voters could even explain why they supported a strong reformist like NSW Premier Mike Baird in droves, while Tony Abbott is one of the least popular politicians in the country. They might note that Baird was upfront with voters before an election, and argued the merits for an unpopular policy, detailing how electricity privatisation would benefit the community via greater infrastructure spending. They might note that Baird presents as sensible, moderate, competent, willing to compromise and debate; in contrast to a rabid ideologue like Abbott, whose only talent is for fighting. They might note, above all, that they prefer politicians who treat them like adults versus politicians whose tactics revolve around manipulation of the electorate and the media and who change their message every five minutes.

Australia is still capable of economic reform. Mike Baird showed how it’s done. And the grisly secret is that it involves respecting the electorate more than a lot of members of the political elite — both within and outside politics — currently do.

Agree in general Bernard…err, but not so sure about the old Aussie consumer deleveraging.
Your average punter out there is still up to their eyeballs in debt. Indeed, if they want to buy a house, they have to borrow 8-10 times their income in Melbourne and Sydney.
We won’t see how sustainable all this really is until the mining boom jobs/car industry jobs are all gone by late 2017.
We’ll see how deleveraged we are then

Even my most mediocre students from Tertiary to Primary School levels could comprehend that Australia, unlike such tiny States as Ancient Athens, needed to rely on representative democracy if Governance wasn’t to become a chaotic shambles, so why the Crikey Duumvirate can’t see this is difficult (apart from influences such as emotive blinkers) to explain.
But I’m sure most analytically capable readers would wish them well should they decide to make an effort to come to grips with the major differences between direct and representative government.

Err.. “a recalcitrant mob who must be convinced, persuaded, gulled or bribed into accepting“.. you missed ‘bullied’, ‘bludgeoned’, ‘battered’, ‘bashed’, and ‘belaboured’ (not sic!).
And that’s just the ‘B’s.