The Chaser boys are branching out ... into print media. Plus other media tidbits of the day.

A Chaser revival. Sixteen years after they got together, the Chaser team have turned to Pozible to crowdfund $50,000 to start The Chaser Quarterly, a print newspaper that harks back to the group’s early days, before all that TV nonsense they got up to.

“There’s not enough content in this world,” Charles Firth told Crikey when asked why they would do this. “We’re utterly bereft of content. The way to solve that is to create turgid, long-form essays.”

“We’re expecting to be as popular as Robert Manne, as cheerful as Gerard Henderson, but as coy and shy as Annabel Crabb.”

Given this, the return to print was obvious. The Chaser boys, you see, are pushing 50. “We just thought it’s the perfect time to get back into print and tell everyone what we think is wrong with the world, because that’s what you do when you’re middle-aged. And there’s no better way to be pompous and middle-aged than in print.”

As well as the print edition, The Chaser Quarterly will operate a paywalled website, because it is 2015, after all. Like all successful media companies they’ll also be using a tax haven, with Firth assuring us that a plan to use a “double-Dutch Irish sandwich”, a la Apple, is no joke. “We’re going to track, each edition, how much money we aren’t paying to the Australian government,” he said. “We’re planning to spend a few million on accountants, and $50k producing the actual publication.” Firth, who also launched the short-lived Manic Times, said he hoped his efforts would bag him a knighthood. “There’d be no complaints about a Sir Charles Firth!”

Meanwhile, the Chaser’s archives have today been made available on Trove through the National Library. Firth told Crikey he was very much looking forward to the National Library shouldering the defamation liability of the earlier editions. — Myriam Robin

Stealing their thunder. The entries for Walkley Awards close on Friday, and those entering the bitterly fought headline journalism category might have even more competition than usual this year.

The Walkleys have broadened the award to recognise “the art of witty and succinct journalism that grabs attention across all media” in 10 words or fewer. “It is open to all journalists, sub-editors and digital content producers whose job it is to attract readers and viewers with clever use of language,” the Catagories Explained section of the Walkleys website states.

Could this mean gongs for clever tweets, or neat headlines on non-text media? Crikey asked the Walkley foundation but we have not yet heard back. — Myriam Robin

“These latest members of the Council reflect both the increasing globalisation of the media as well as the continuing importance of local newspapers serving their communities,” Council Chair David Weisbrot said in a statement. — Myriam Robin

Trump v Kelly continues. Are we about to see a shifting of the tectonic plates in the Republican nomination campaign as loudmouth Donald Trump does his best to ruin his run for president? Take these portents.

On Monday night Trump returned to the firefight with Kelly, lambasting her after she returned to the host’s chair at Fox News after a brief break. He and his camp fired a string of tweets at Kelly questioning her competence, and retweeted other tweets from supporters calling Kelly a “bimbo”. Overnight Fox CEO Roger Ailes (who would normally feel at home with a candidate like Trump, who appeals to Fox’s core Tea Party audience of older white males and females) fired back in a statement, calling on Trump to apologise and saying: “Donald Trump’s surprise and unprovoked attack on Megyn Kelly during her show last night is as unacceptable as it is disturbing.”

But Trump ignored Ailes (which can be a crime in itself) and fired back in a counter statement saying he did not think Kelly was a “quality journalist.” “Hopefully in the future I will be proven wrong and she will be able to elevate her standards to a level of professionalism that a network such as Fox deserves,” Trump was quoted as saying. Will Rupert Murdoch try and save the Party from Trump and itself? — Glenn Dyer

Front page of the day. This Saturday, Kevin Rudd will guest-host CNN’s Amanpour program, where he’ll interview Stan Grant and UN envoy Christiana Figueres. Hence this from The Courier-Mail … 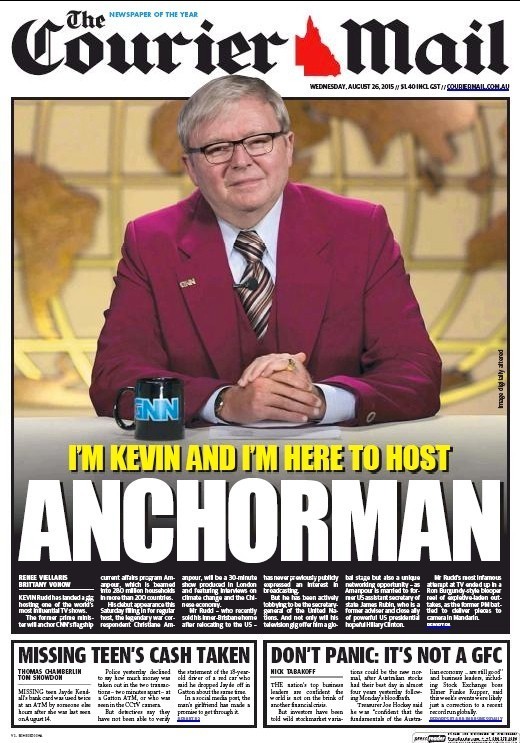 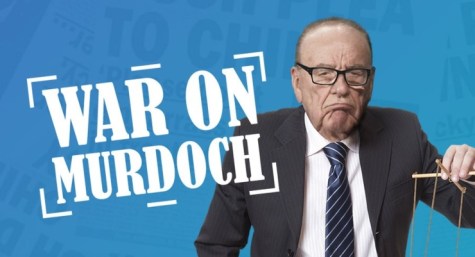 The tangled Chaser chain of responsibility

How can Murdoch’s GOP win with Trump? Maybe Kelly was sent in to bait him?

It is surely impossible that even the Repugs can be so stupid as to give a glancing blink at the Donald so, without getting all looking-glass wars here, what is the reality behind this bizarro world nonsense?