Sex, lies and peanut butter all got people talking about Aussie politics.

Ah yes, taxes. The only thing, other than death, that is certain. And they certainly got Federal Treasurer Joe Hockey up six places this week into second behind the PM, as Hockey pledged to address bracket creep caused by wage inflation. Some media were bemused that within 18 months the budget crisis has become a fertile environment for tax cuts. Opposition Leader Bill Shorten sat unmoved in third place as Justice Dyson Heydon further delayed his decision on whether he will step down from the Royal Commission into trade unions, and Senator Jacqui Lambie, entering our index in eleventh place, accusing Shorten of breaking a $200,000 funding promise for a ferry feasibility study in Tasmania.

Foreign Minister Julie Bishop called on Shorten to show leadership after WA Labor politicians retweeted “appalling” jokes about former SAS soldier and Liberal Party candidate in the Canning by-election, Andrew Hastie, and described using fighter jets to drop aid, rather than bombs, to Syria as a “terrorist picnic” after the US asked Australia to take part in air strikes. Minister for Employment Eric Abetz, in fourth place this week, labelled colleagues responsible for Cabinet leaks as “gutless”, after talking points emerged two days in a row encouraging MPs to describe the Cabinet as functioning “exceptionally well”. There’s nothing like a leak or two to suggest otherwise, as Shorten pointed out in Question Time last week.

Immigration Minister Peter Dutton revealed seven Australians stopped on their way to allegedly join terrorists in the Middle East tried to leave the country twice, and faced some criticism after a Wilson Security guard admitted he falsified a report of being assaulted by an asylum seeker. PUP Leader Clive Palmer returns to the index in seventeenth place this week after releasing a bizarre video of him wearing a rabbit onesie and smearing peanut butter over someone that slightly resembled the PM. Was anyone surprised? 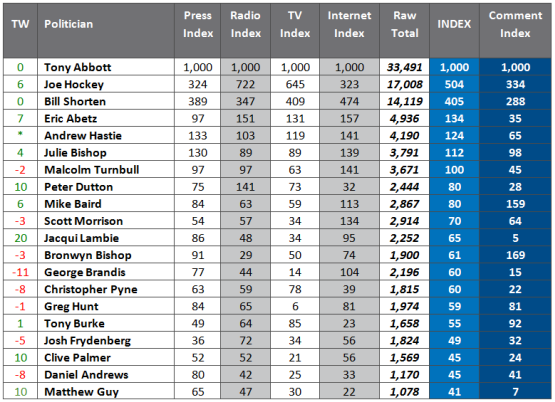 An explicit twitter handle about Tony Abbott accidentally aired on ABC’s Q&A on Monday night, and a ‘smiling activist’ was fined $500 for calling the PM a rude word via a street sign in Sydney.

NSW Premier Mike Baird was mentioned alongside Auburn Deputy Mayor Salim Mehajer throwing that wedding, as well as the prisoner that escaped Goulburn’s maximum security jail, with the last remnants of #choppergate still making the rounds on talkback.

“Life is short, have an affair”? More like ‘don’t use your work email address to sign up to anything even remotely questionable online’, after it was revealed close to 700 Ashley Madison accounts were linked to .gov.au emails.