PM&C stiffs motel. The owner of the Jardine Motel on Thursday Island is claiming that the Department of Prime Minister and Cabinet owes him $53,000 in cancellation fees, after it cancelled a booking for 33 rooms at short notice over the weekend. PM&C  booked 44 rooms, almost the whole hotel, but told manager Steve Mills on Saturday it only needed 11 for the PM’s trip, which started yesterday. Mills says he has only been offered $37,000. Mills has described the Prime Minister and Cabinet bureaucrats who cancelled almost all of the 44 rooms that were booked at his hotel as “totally callous” and said they had little sympathy for a situation that has left him facing a significant loss and the possibility of laying off staff. The news made the front page of The Torres News, but the Department of Prime Minister and Cabinet didn’t respond to Crikey‘s questions as to why so many rooms had been booked and how much would be paid to Mills. 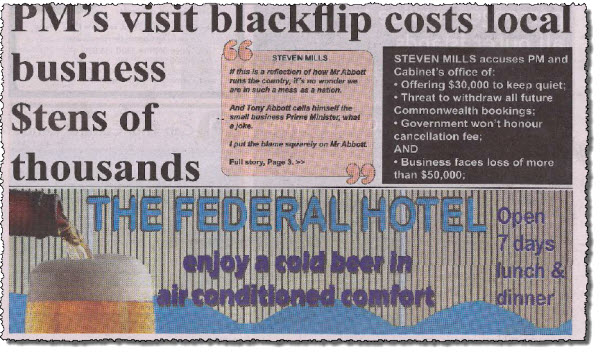 Bark Petition on shaky ground. The Uluru Bark Petition, which has been used by conservative Christians and politicians to argue that Australia shouldn’t have same-sex marriage because some Aboriginal cultures do not agree with it, has come under criticism from Richard King, general manager of Anangu Pitjantjatjara Yankunytjatjara (APY), who told the Centralian Advocate last week that the petitioners had come onto traditional lands without a permit. While it is rare for people to be fined for being on the lands, a number of people in central Australia have spoken out against Pastor Peter Walker, saying he isn’t known to locals: 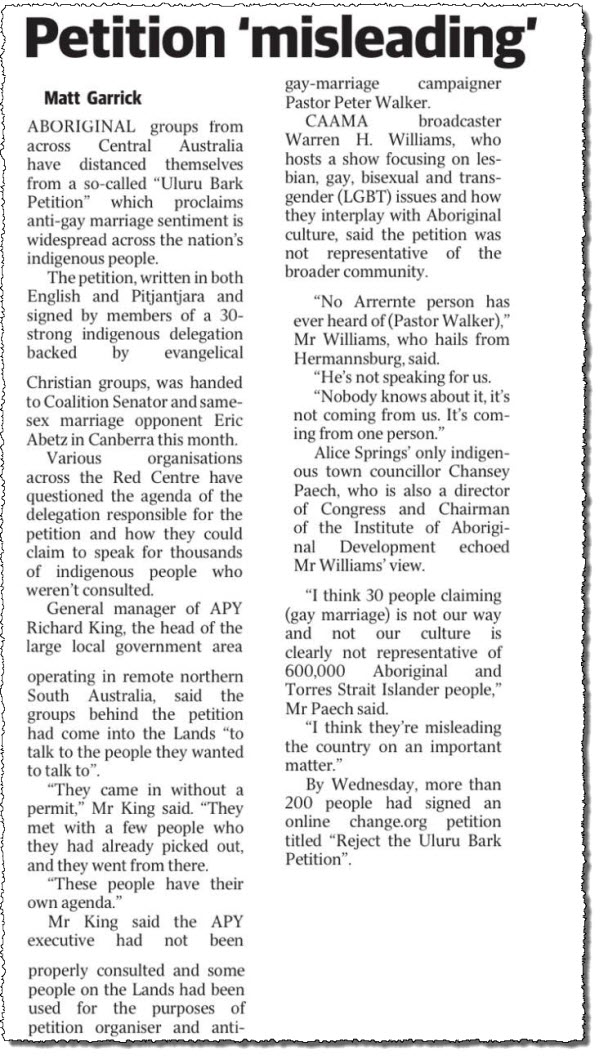 Malcolm for PM? Former Liberal NSW MP and former Liberal Party treasurer and founder of the Millenium Forum Michael Yabsley is spruiking his friend Communications Minister Malcolm Turnbull as the guest speaker at his Wombat Hollow Forum next month, and the write-up seems to hint that leadership chatter is not at all put to bed:

“Rarely if ever have the life and times of an Australian citizen been so closely scrutinised and so keenly anticipated as that of Malcolm Turnbull.

From scholar to journalist to barrister to businessman to parliamentarian and political leader, the eyes of the nation have been on Malcolm Turnbull for a generation.

All the signs are that the level of scrutiny and anticipation are about to go into overdrive again.”

Wombat Hollow, a property in the Southern Highlands, is also known for Yabsley’s bespoke lamps, which he builds himself. Maybe he’s hoping Turnbull will see the light?

Katter contest turns catty. The leaks from the inner south-east of Melbourne continue to flow, with a tipster telling us that there are ALP members so concerned about the idea of Carl Katter as candidate for the seat of Higgins that they have had a “secret informal meeting” to work out what to do about Katter:

“Local members of the South Yarra, Prahran, Carnegie and Malvern branches met, as well as a couple of people from the Seat of Melbourne who are worried the ‘Katter effect’ will spread to Melbourne. The group were working on a plan to find a replacement candidate as a back up in case Carl Katter is removed or steps down, as his candidacy is looking increasingly vulnerable.”

We attempted to contact the local branches mentioned in the tip, but didn’t receive any replies to our correspondence. While it’s unlikely that any Labor candidate will win the blue-ribbon Liberal seat of Higgins anyway, it sounds as if they are more concerned that the younger brother of federal MP Bob Katter will take attention away from winnable races.

Consolation PCs. Long-time readers of Crikey may remember our reporting on Macquarie Uni’s attempts to close down its post-graduate students’ association, a move insiders believed was all about absorbing the half-million dollars the association had in its bank account (a war chest built up in the days of compulsory student unionism). Today’s Oz reveals there’s finally been a settlement, with the Macquarie University Postgraduate Representative Association (MUPRA) dissolved and re-established as a subsidiary body of the university’s student advisory board. Under the settlement the funds will be transferred to the university and made available for post-grad student initiatives. Minus the $160,000 legal fees. So the university largely won, but it’s not all bad news for post-grad student representation. Crikey understands the settlement also stipulates the university must provide the new body with a new computer.

Islands in the stream. A Twitter user who claims to hate both terror group Islamic State and karaoke has decided to create a Twitter account that combines the two. The account @isis_karaoke uses stills from IS propaganda videos and captions them with lyrics from pop songs, as a way to make fun of the group. The results are unsettling, but funny: 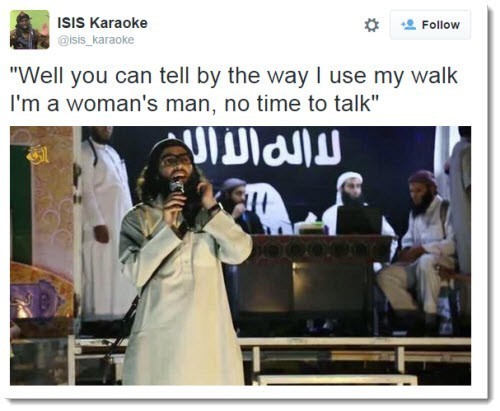 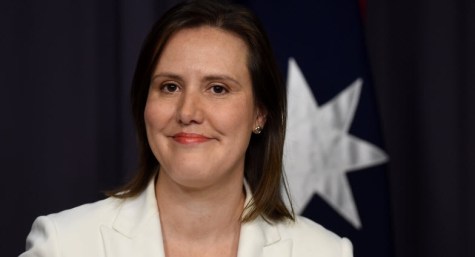 I personally think Carl Katter will be dis-endorsed, the most likely replacement would be Neil Pharaoh, the Labor candidate for the state seat of Prahran. Granted the fear that a flow on affect will hurt in surrounding seats is maybe a bit reactionary, after all Labor won’t win Melbourne, Kooyong and Goldstein but should hold on to Hotham and Chisholm and Melbourne Ports, the latter being the only seat where Katter’s craziness could cause some votes to go Green, such is the probability in Higgins, where it is a sure bet the Greens will finish second with a far more desirable candidate.

The Uluru Bark Petition, which has been used by conservative Christians and politicians to argue that Australia shouldn’t have same-sex marriage because some Aboriginal cultures do not agree with it […]

Wow. That’s even more indistinguishable from satire than usual.

Ridicule on Daesh is probably the most effective way of getting to the brain-dead young’uns who might be inflamed.

All ideas deserve ridicule. Those that are worthwhile will retain their worth in spite of such. No religion yet has achieved this.