The sharemarket has lost billions. But where does that money come from? And where did it go? And was it even real money to begin with? Economist and freelance journalist Jason Murphy explains. 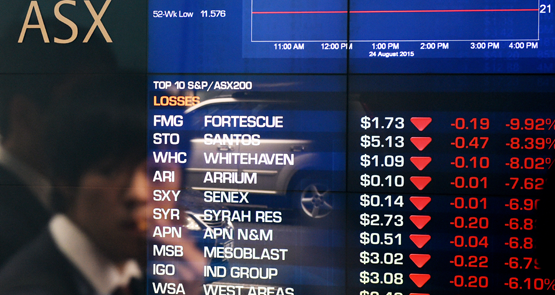 Global sharemarkets are a vibrant scarlet on Tuesday morning as investors around the world sell their stocks to a group of buyers making smaller and smaller bids. The headlines shout about a wipe-out of billions, or even trillions in value. The ASX fell 4% on Monday, and Shanghai fell 8%. Wall Street fell 4% last night, the Nikkei 4.6%, London’s index 4.7%. Tuesday’s trade is in session, and it seems a small share of the losses has been recouped already. But what does it mean to the real-life share investor?

Those lost billions are paper losses. They compare the hypothetical cash value of the sharemarket before and after the day’s trade. Paper losses count most when they are realised — you can be behind when you’re playing blackjack, but all that really matters is your holdings when you walk out of the casino.

Young people are probably going to be fine. They are going to sit at the felt for hours. There’s plenty of time to make back their stack.

The oldies, though? They’re halfway to the cash-out window when 10% of their chips just vanish.

If you fund a retiree lifestyle by selling shares you bought a long time ago, either your income drops or your ability to sustain that lifestyle shrinks by a couple of years. (Although if you are using the sharemarket to boost your deposit for a first home, you’ll be renting for a while longer yet.)

For this reason, investing in shares is a wiser move for the young. People living off their assets should be far more invested in cash and annuities, in order to manage this exact scenario.

The older, wiser investor who does have shares, is also well advised to be betting on the boring parts of the ASX.

Other defensive stocks, like Domino’s Pizza, did relatively well too, falling only 2.15%.

Holding your stock through a dip can make sense.

The market price of a security is a function of the latest interaction between a willing buyer and willing seller. It needn’t have any relevance to all those holding the stock. They can have beliefs about that stock’s long-term value that are independent of other people’s beliefs.

The efficient-market hypothesis says the only fair value for an item is its price, but the efficient market hypothesis has been found desperately wanting in recent years. Just because someone sold a tiny fraction of BHP at $22.85 yesterday does not mean everyone holding the stock has to agree that is a fair price.

The current price, rational actors can believe, is not representative of a fair price. Those people will hold onto their stocks through the storm. “It’s not timing the market, it’s time in the market,” they will tell themselves.

This dip is, of course, probably a short-run event. Most sharemarket falls reverse pretty quickly. You can see on the graph below several sharp panics followed by sharp rises.

Every trade has two sides, so talk of a “sell-off” may mislead the sharemarket ingenue. We could also describe the events of Monday, where $5.2 billion in stocks changed hands, as a bargain-buying frenzy.

Many smart investors are probably “buying the dip”.

But even those brave enough to do so, doubtless remember the events of 2007-09, when the sharemarket took 18 months to go from peak to trough. It lost over half its value.

If China’s incredible run of economic infallibility has just come to an end, the rules of blackjack just changed and we’re playing cards when we should walk away.

Many global companies have acclimatised to a booming China. Subtract that from the equation, and there could be a desperate and lengthy period of reorganisation where they remember how to find value without China.

The big question is whether China’s wild sharemarket swings point to a bigger problem in its economy, or whether they are isolated. That is a question on which investors need to form a view.

Why you think the sharemarket is about to crash, even if it isn’t

The big chink in capitalisms armour..

Interesting the way the big players counsel ‘ordinary stockholders’ to remain calm and not sell whilst they do they exact opposite.
Gotta have some dumbo to fleece.

It’s a real problem if you are a margin trader and this is a market strategy financial advisers have been known to push. With margin trading, your lender could force you to make today’s values real. We could well see stories begin to emerge of ordinary investors wiped out by these falls.

I also think we’ve seen a lot of computer driven trading to stop losses. If this is so, prices should rise again quite quickly provided not many have been wiped out.

The oldies still get their divvies, unless they sell they havent lost anything. I sold a big chunk of TLS last week, I doubled my money since the GFC and got the divvies. Now to buy into cheaper stocks that will give me capital gain and wait for Joes pension so I can lie on the beach in Cambodia and wait to die.